Imagine a surgeon being able to watch multiple surgical procedures in 360 virtual reality in order to determine the best way to operate on their current patient.

In the past, surgical videos were difficult to locate and often of poor quality, with many being filmed on a cellphone or through a surgical instrument’s video feed. Believing that medical professionals would be interested in studio-quality educational videos, USC alums Brian Conyer and co-founder Jihye Shin created GIBLIB, an online library of curated, on-demand educational videos in 4K or 360 virtual reality.

This occasional series highlights some of the startup companies that come from USC faculty, staff, postdoctoral scholars, graduate students, undergraduate students and alumni. The series seeks to celebrate successful entrepreneurs and build awareness of the robust entrepreneurial community in the life and health sciences at USC.

Justin Ichida stays at the forefront of ALS research

GIBLIB, the “Netflix of medical education”

The first initiative provides physicians a modern alternative to traveling to conferences around the world to earn their CMEs. Many medical professionals who used to struggle with finding the time and funding to fly to various conferences can now access videos of the conference from their phones or computers.

The second initiative will help provide a resource for medical students, trainees, or even practicing surgeons. GIBLIB founders believe that in the future, all medical students are going to wear a VR headset as part of their training; GIBLIB’s goal is to provide the content for that headset.

Growing demand for the “Netflix of medical education”

One of GIBLIB’s major challenges is to supply enough videos to keep up with the demands of its growing subscriber base. Its focus had primarily been on general surgery, but GIBLIB has received many requests for specialty procedures, including orthopedic surgeries and other specialties. To target one of these needs, GIBLIB announced a partnership with Cedars-Sinai Medical Center on a course called “Cedars-Sinai: The Essential GI Surgeries.”

GIBLIB deliberately attempts to film the same procedures in different ways. For example, for gastrointestinal (GI) surgeries, they might film one performed through laparoscopy and another performed with the assistance of a robot. The small team works hard to balance producing quality videos with keeping up with the demands for videos. 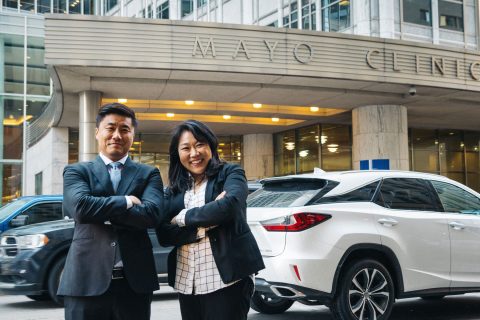 GIBLIB offers some advice to other startups. Conyer, co-founder and CEO, tells startups to “make sure your business model helps you generate cash.”

“Don’t run out of cash,” Conyer says. “Cash flow matters. Cash is a real thing, so monitor that because without it you’re not a business and you can’t innovate and you can’t move forward.”

The other advice that he offers is to find the right team. First, Conyer emphasizes the importance of finding a co-founder or partner that you have chemistry with and is dedicated and committed to the company. Then, he describes his team as fast, smart, and resilient. He describes how his team has “always been able to quickly reevaluate things and keep moving.”

The team started out with many who were highly skilled in technology in order to build the streaming platform and all the features. However, after they realized that people were more interested in the content, their team shifted from focusing on innovation and technology to depth of content. Their leadership has also had to shift priorities in order to support and cultivate the creative environment of the team.

USC: A great start for the “Netflix of medical education”

Conyer emphasizes his good fortune that his alma mater, USC, was the first to take a chance on his company. To create its first video at USC, GIBLIB had to spend a full year getting everyone at the hospital on board, including executives, the legal department, the media department, and the department of surgery.

After filming their first surgery at the USC Keck School of Medicine, they approached another hospital and asked them to partner with GIBLIB. This time, because they had tested the buy-in process already and because they had a successful video to show for it, the process only took two weeks.

GIBLIB now films regularly with six of the top 10 hospitals in the United States. They don’t have to look for new partners; instead, new partners reach out them.

USC research could change robotic surgery in the future

Keck School of Medicine of USC researchers look to technology as they decode surgical skills and create a training journal.

The Virtual Brain Segmenter turns a tedious step in the scientific process into an immersive experience.

A special VR installation at Heroes Hall from the USC Institute for Creative Technologies lets visitors experience what veterans see when they’re being treated.

Innovators of USC: Doctors have an eye on GIBLIB, the ‘Netflix of medical education’