“Your love for your children shines through,” Austin told the parents.

The USC McMorrow Neighborhood Academic Initiative is a pre-college enrichment program designed to prepare students from South and East Los Angeles for admission to a college or university.

Under the program guidelines, students must commit to a seven-year plan of after-school tutoring coupled with Saturday morning classes. Parents are also required to attend a biweekly Family Development Institute program to create a hands-on approach to reinforce student academic goals and study habits. 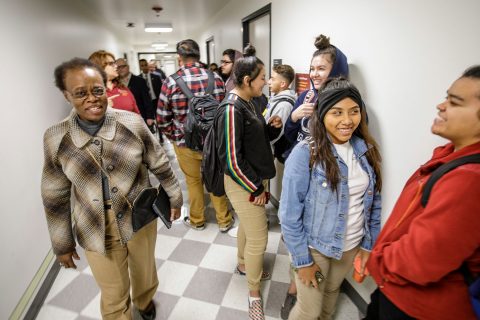 During her talk on Saturday, Austin spoke about the support she had growing up, which encouraged her to excel in her studies. She spoke of the lessons in generosity that her father — a humble barber who treated everyone with respect — taught her in New York’s South Bronx. She also spoke about the many sacrifices her father made to give his daughters the opportunity to succeed. Although he didn’t finish high school himself, he stressed academic achievement as a priority.

The majority of students who enter the NAI program will be the first in their family to attend college.

“The fact of the matter is that you get support from your family, but they may not have college experience,” Austin said. “However it’s great to have someone guide you that has been there. To tell you who to call and where you can go for help.”

The NAI program encourages parents to support their child after they leave home for college.

“Having interim President Wanda Austin here on a Saturday sends a message that this program is important to the university,” said Lizzette Zárate, NAI curriculum and instruction specialist. “Her message was really powerful and really resonated with the parents. She spoke about unconditional love and support, which can lead to something better and more opportunities in the future.”

The first graduating class from eastern Los Angeles will graduate in 2019.