Members of the USC women’s basketball team were in a bit of a funk. A recent tough preseason practice had left them frustrated.

But their frowns soon disappeared thanks to a big change in scenery — and perspective. The team stepped outside the Galen Center to inspire and encourage 24 young local girls as they painted self-portraits that reflected things they liked about themselves, part of an event to promote positive body image and self-esteem.

In a flash, their gloomy moods had turned to joy.

“You go out there and see the kids and how happy they are to be around us,” said Aliyah Mazyck, a senior guard. “It brings up good emotions and motivates you to be like, ‘Forget about that practice.’”

Those positive vibes might be why the players are so committed to Trojan Outreach. All student-athletes at USC are encouraged to volunteer through the award-winning community service program, and the women’s basketball team is particularly enthusiastic about helping others.

We need to use our platform to reach out to the fans, especially little girls.

“These people look up to us, and we need to use our platform to reach out to the fans, especially little girls,” said junior guard Minyon Moore. “We all serve as role models.”

In the past year, the team has inspired girls from throughout Los Angeles to get involved in sports and embrace a healthy lifestyle. They’ve also hosted an 8-year-old girl fighting brain cancer for a courtside VIP experience and surprised 600 local girls by passing out holiday gift bags during a special visit to the Galen Center.

Those events and many others reflect how the team has gone beyond the call of duty to serve the community, said McCall Hall, director of community outreach for USC Athletics.

“This is one of the most responsive and respectful and enthusiastic teams I work with,” she said. “They are very much committed to this work.”

USC women’s basketball team makes a difference in the paint

When the players recently met up with students from Birdielee V. Bright Elementary School to paint positive self-portraits, junior forward Ja’Tavia Tapley said she initially had some trouble getting the girls at her table to open up. 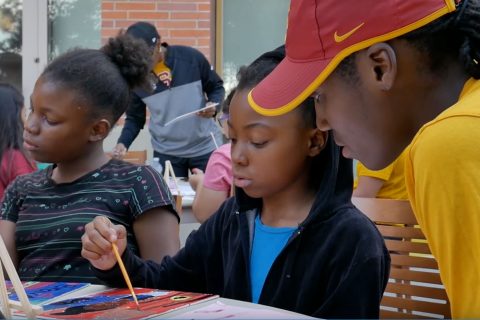 One participant seemed particularly quiet and uncomfortable, so Tapley asked her what she was planning to draw. The girl told her she didn’t feel like painting a self-portrait because she didn’t like her appearance.

“I told her, ‘Well, what we’re doing today is painting ourselves, so you should try to find the beauty in yourself. I think you’re beautiful, so you should paint yourself,’” Tapley said.

After just that little bit of encouragement, the girl began to smile and talk more. Soon she was painting confidently, Tapley said, and her transformation helped bring the rest of the participants to life.

For other players, the painting event helped them recognize the influence they carry as collegiate athletes. Kyerstin Galloway grew up in Compton and idolized the members of the USC women’s basketball team. Seeing how the young girls at her table looked up to her in the same way opened her eyes to the power of her position.

“Community service is a humbling experience,” she said. “We’re always on this pedestal as student-athletes, so when we get together with these kids, we’re reminded that we were once in their shoes. It gives us that connection to the community.”

Another meaningful moment came last year, when the team helped fix up an apartment for the Jenesse Center. The local nonprofit provides housing and support services to victims of domestic violence and their children.

The players gave the apartment a fresh coat of paint, brought in new furniture and installed artwork and other personal touches. 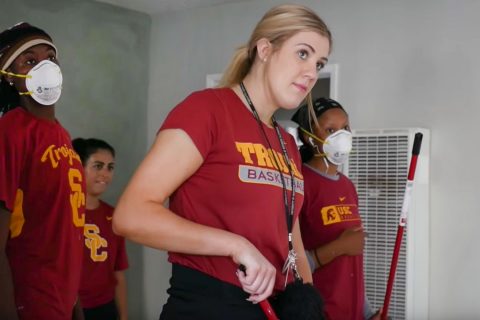 Danijela Milisic, center, and her teammates help spruce up an apartment, with support from the local nonprofit Jenesse Center, for victims of domestic violence. (Image/William Nguyen)

“You hear stories about abuse, but you might not actually think about it,” said Shalexxus Aaron, a freshman guard. “To see a woman who was in that situation or kids in that situation, it motivates you to want to do more.”

Tapley echoed those sentiments, describing the gratification she felt by supporting families recovering from traumatic experiences. She also acknowledged that there is more work to be done.

“There are a lot of women out there who don’t have the chance to be in that program, to go from being hurt or abused to living somewhere for two years and getting on their feet,” she said.

The team’s passion for community outreach is sustained from one season to the next by coaches and other staff members, notably head coach Mark Trakh and director of operations Ashley Ford. They encourage each new roster of players to commit to using their platform to help others.

“As basketball players, they’re in a position now where they can change lives,” Trakh said. “You never know, they might say something to a youngster that could change their life. They know that and have taken it upon themselves to accept that responsibility.”

As basketball players, they’re in a position now where they can change lives.

Aarika Hughes, an assistant coach who played under Trakh at USC, also pushes volunteerism as a priority, even though she acknowledged it’s sometimes hard to embrace the duty of serving as a role model. She speaks from experience, having spent her 21st birthday building a house for Habitat for Humanity.

It wasn’t ideal timing, but she got to work driving nails into a roof alongside her teammates. Then as she learned more about the family that would occupy the home, Hughes said the broader meaning of community service came into focus.

“There’s more than just what’s going on in your life,” she said. “We encourage our student-athletes to give back and show selflessness and put others ahead of themselves.”

That same moment of realization came for junior forward Danijela Milisic during a day off from practice. Instead of enjoying the rare opportunity to sleep in, team members had been coaxed into leading a community event that required them to get out of bed at 6 a.m.

Milisic was tired from school, her training and a short night’s sleep. But when the team arrived at the venue and a group of energetic kids flooded into the room, excited to meet their idols, her attitude quickly shifted from grumpy to gleeful.

“It was easy, it just naturally happened,” she said. “It was about more than basketball at that point.”

Trojans hoop it up at wheelchair basketball tournament

The annual USC event gives students with disabilities an opportunity to compete in organized sports.

The aspiring surgeon has helped the homeless and organized outreach projects — and he’s just getting started.

Fifty students and 16 faculty members travel to a school where patients will receive oral surgery and more.