He had just finished hosting a group of energetic foster youth with a few of his teammates from the USC football team during a community event on the University Park Campus, and the 6-foot-3 tight end was ready to call it a day.

But then he spotted a stack of leftover boxed meals and had an idea.

He called over teammates Jordan Austin and Toa Lobendahn. The trio grabbed the boxes, piled into Lobendahn’s car and headed downtown to pass out the extra food to people living on the streets of Los Angeles.

It might seem like a small gesture, but to McCall Hall, director of community outreach for USC Athletics, it perfectly captures Imatorbhebhe’s spirit of selflessness and service.

“He had already spent three or four hours with these kids,” she said. “He didn’t have to take that next step, but he chose to.”

It’s just one example of the football star’s wholehearted embrace of Trojan Outreach, the community service program that encourages USC’s 650-plus student-athletes to volunteer their time and energy to support others in need.

People out there need help, and I can do something about it.

For Imatorbhebhe, it feels like the least he can do, given the powerful voice he has as a highly visible student-athlete at a top-tier university.

“I don’t want to be somebody who is all wrapped up in what I have going on or focused on beating the next video game or whatever else,” he said. “People out there need help, and I can do something about it.”

Imatorbhebhe learned the strength of a kind word or simple greeting from a role model early on, while growing up in Suwanee, Georgia, about an hour from Atlanta. He remembers times when he was struggling and lacked confidence as a boy, but received little encouragement.

“I would have loved to be the kid who was singled out, to have an older guy put his arm around me and say, ‘Dude, there’s something special about you. You’re going to do awesome things,’” Imatorbhebhe said.

When he did have those experiences at North Gwinnett High School, especially when older players at the football powerhouse gave him pointers, it opened his eyes to the influence he might one day have.

Then he visited USC as a 10th-grade student with his younger brother, Josh Imatorbhebhe, who also is on the Trojans football roster. They spent time with star receivers Nelson Agholor and Marqise Lee, who told the brothers if they kept working hard, they would achieve great things.

“When you are young, you need to hear that you have value, that you can be someone,” Imatorbhebhe said. “Hearing that in your formative years is huge.”

USC football volunteer work: Player realizes his dream to give back

Imatorbhebhe watched dozens of USC Athletics videos on YouTube as a teen, but the one that affected him most didn’t showcase superhuman feats on the field or in the weight room. Instead, it followed a dozen football players as they built a house in Haiti for families devastated by a massive earthquake.

He saw former USC quarterback Matt Barkley and receiver Robert Woods toil for hours in the tropical heat, then dance and play soccer with dozens of local kids.

“You could see in their eyes, this was changing their lives, just being able to help change other people’s lives,” he said. “There was something so powerful about that to me, it felt so much bigger than just football. I thought, when I get to college, I want to do stuff like that.”

You could see in their eyes, this was changing their lives, just being able to help change other people’s lives.

So when he came to USC in 2015 and found out about the Trojan Outreach program, which had just received a $5 million gift from the Otis Booth Foundation to strengthen its community service initiatives, Imatorbhebhe knew he had to get involved.

“Having the opportunity to be in a place like this, holding this position on the football team where people look up to you — where if you speak, people listen — it’s not something I take lightly,” he said. “A lot of the guys on the team are like that. We don’t want our time here to just be about what we do on the field.”

Trojan student-athlete goes beyond call of duty to serve others 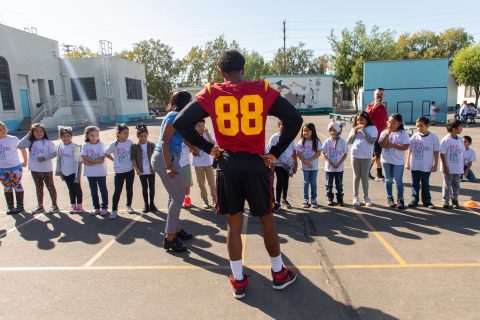 Being a role model for kids and encouraging them to work hard is important to Imatorbhebhe. (Photo/Jennifer Calderon)

Imatorbhebhe has since volunteered his time to share anti-bullying messages with children at a local elementary school, encourage middle school students to believe in their potential and emphasize the importance of teamwork and perseverance during an international event celebrating young people who better their communities.

Last summer, before Imatorbhebhe and his teammates took those extra meals to distribute in downtown Los Angeles, they spent time with foster youth during an event called Embrace Your Inner Hero. In addition to hanging out with the players, the kids watched a special screening of Black Panther and went home with USC duffel bags stuffed with goodies.

“I remember getting back to my house that day and thinking, dang, I feel like we did something today, that people are better off today because of us,” Imatorbhebhe said.

It’s been critical to have that broader perspective, he said, especially while battling back from injuries that kept him sidelined for half of last season and all of this season. He acknowledged it can be difficult at times to deal with the frustration of not being able to play.

“But for me, mentally, it’s about not letting a setback like that stop me from loving people well,” he said. “I love the game because it brought me here and is keeping me here, but my being here is so much bigger than just the game.”

Given all the effort he has put into Trojan Outreach projects, Imatorbhebhe said it feels good to see the volunteer efforts of all student-athletes at USC being recognized nationwide. The university recently received the 2018 Community Service Award from the National Association of Collegiate Directors of Athletics and the Fiesta Bowl.

“To win an award like this in a city like L.A. is huge,” he said. “It’s a city that’s so big and has so many people in need, so it definitely feels like we’re making a difference as an athletic department.”

However, he downplays his personal role in helping earn the honor. That humble attitude is something McCall also noted about the 21-year-old. She often pushes him to share more photos on social media to promote his contributions to community service events, but he keeps a low profile.

“It’s not like he’s doing this for the perfect picture to post on Instagram,” she said. “That’s why I know his heart is in the right place.” 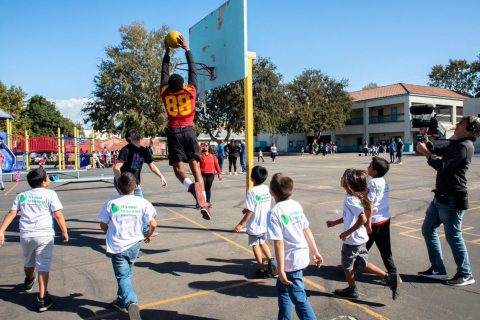 Imatorbhebhe relishes the opportunity to inspire and encourage kids using his platform as a USC football player. (Photo/Courtesy of USC Athletics)

Although Imatorbhebhe relishes the thought of competing in cardinal and gold for one more year, the redshirt junior is already thinking about how to continue his outreach work after leaving USC. He wrapped up an undergraduate degree in economics in the spring. Now he is earning a master’s in social entrepreneurship at the USC Marshall School of Business, learning about business models that are sustainable and dedicated to social good.

He is confident that knowledge will help him support others in the future. If he has the resources, whether through playing in the NFL or finding success in the business world, he envisions giving back to his hometown and other communities in need.

“I don’t know what exactly it will be, but I want my life and what I do in the future to be about more than just living comfortably and making money and finding a nice house to retire on the coast,” Imatorbhebhe said. “I want whatever I do to have purpose that’s bigger than me.”

How athletes are building and leveraging their personal brands

USC experts join with the NFL to guide players on everything from public speaking to social media.

Eight of the 18 USC sports with data tracked by the NCAA had a rate this year above 90 percent.

He gladly traded shoveling snow for football practices at dawn, but he still daydreams about camping, fishing and his mom’s deep-dish chocolate chip cookies.

USC football player uses his star power to help others