Many of the thousands of Trojan alumni back for Homecoming this weekend can’t remember a USC football game where they didn’t hear the strains of “Tribute to Troy” and “Conquest” punctuating the action. Director Arthur C. Bartner and his famed USC Trojan Marching Band have made sure of that, never missing a USC football game, home or away, for the past 31 years — a streak of consecutive games that will reach 400 this Saturday.

It’s been quite the journey for Bartner and The Spirit of Troy, one that has taken them 355,000 miles to 24 states across the college football landscape, from Honolulu to Happy Valley. And in those intervening 175 games with their long days, hostile crowds and grueling travel, some memories have become indelible for the director, now celebrating his 49th season at the helm.

Bartner still remembers how the streak started back in 1987. The 19th-ranked USC team led by first-year head coach Larry Smith visited Michigan State for the season opener and lost by two touchdowns.

“Larry came back and called me and said, ‘We’re not going to travel without the band anymore. So figure it out,’” Bartner recalled. “So he started the tradition.”

The band began the consecutive game streak at home versus Boston College the next week and didn’t miss a road game for the rest of the season. And they haven’t since.

Bartner’s objective when he takes the Trojan Marching Band on the road is simple: Make the football team feel at home.

You want to keep our crowd involved.

“My philosophy is you want to give them as close as you can a home-field advantage, which means we want to balance out their crowd, their band. And you don’t do it at timeouts. It’s what happens during the course of the game. We have drum cadences, great fight songs, all these stand tunes. You want to keep our crowd involved.”

Over the years, opposing teams have taken notice of the band’s effect and taken measures to neutralize them, moving the band farther up the stands — sometimes at the top of the top deck — and blaring canned music over the stadium sound system to drown them out. Nothing is more rewarding and memorable, however, for Bartner and band members than playing “Conquest” for the team after a hard-fought victory in enemy territory.

Of course, some games are more memorable than others and one October trip back to Notre Dame stands out to Bartner. 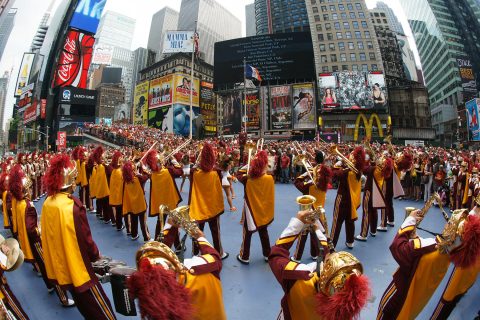 The Trojan Marching Band had raised funds to send the entire organization back to South Bend since 1973, but the 2005 “Bush Push” game was particularly monumental. The top-ranked Trojans were down by three points with 1:32 left on the clock, facing fourth and nine at their own 26-yard line. The band was standing on the on the other side of the field, cradling the southeast corner of the Irish end zone, the perfect vantage point for what came next.

“I’ll never forget looking down and saying, ‘Oh my God, Jarrett caught this pass’ and it’s like, run faster, run faster,” Bartner said. “He’s running straight toward the band. And then after the ‘Bush Push’ when it’s the team and the band celebrating on their field — Pete Carroll right in the middle of it — how do you forget that? That’s still got to be my all-time favorite game.”

Other road games stand out for Bartner because of the heat — Auburn in 2003 he remembers as being overbearingly humid — or bitter cold — the 2013 Colorado game where it dipped into the 20’s is crystalized in his mind — or being evacuated because of lightning at Ohio State in 1990 and in 2012 in New Jersey for the Syracuse game.

It was before the latter game that Bartner fulfilled a lifelong wish, of sorts. He finally got to play the Great White Way, leading a rally in the heart of Times Square.

“Being raised 20 minutes outside of New York, Broadway was a big deal and here I got to perform on Broadway. It was packed with cardinal and gold, an unbelievable moment. I always wanted to conduct a show in a Broadway pit so it was very personal for me.”

Indeed, some of Bartner’s most memorable moments the past three decades have taken place at pregame rallies. The Trojan Marching Band played in a circle around the Space Needle’s observation deck in Seattle, performed a rally in front of Boston’s Faneuil Hall, led a parade through Park City in Utah and just this year performed a rally on the steps of the Texas State Capitol in Austin. Every year, Trojans fans know to head to San Francisco’s Union Square for the Weekender rally the evening before the game. And the afternoon before the biennial Notre Dame contest, Lake Michigan and the Chicago skyline provide a stunning backdrop for the rally on Navy Pier. 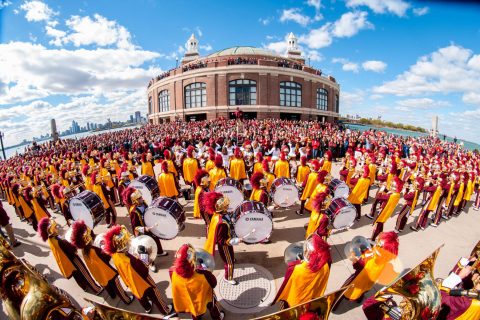 The band plays at Navy Pier Park in Chicago in 2015. (USC Photo/Ben Chua)

The long bus trips and morning-to-midnight gameday schedules can be exhausting for band members. This past weekend, the contingent that traveled to Corvallis for the Oregon State game spent over 33 hours on the bus for the journey north and back. Bartner, however, is proud of the experiences he can bring to the students.

“For some of these kids, it’s their first time on a plane,” he said. “You get to spend time in major cities: Chicago, Seattle, New York, Boston. They get to see the country. And hopefully, they go to a museum.”

Although it’s unknown how many students take this opportunity on their own, visiting the local art museum or historical site is the preferred outing for Bartner during his free time. In Austin earlier this year, he took the entire traveling group to the LBJ Presidential Library on the University of Texas campus.

Unfortunately, Bartner can’t travel with the band forever. He will retire in 2020 after 50 years at the helm of The Spirit of Troy, but he hopes to ensure the band will continue to travel with the team long after he steps off the ladder

To that end, he has established the Trojan Marching Band Travel Endowment to fully endow the $500,000 required to send the band on the road every year.

“This tradition is what’s great about this band program,” he said. “It’s really unprecedented in this country.”

And with the support of the Trojan Family, this unprecedented streak will reach new milestones for years to come.

Trojan Marching Band to perform in Dublin, Cork on first visit to Ireland

Fifty members of the globe-trotting group will make the Emerald Isle the 19th country it has visited since 1988.

Top bands (one being USC’s, of course) to face off before Cotton Bowl