Justin Brice Guariglia, a former National Geographic photojournalist, had talked his way onto an expedition with NASA glacier scientists.

Now, hardly fitting on the plane, he found a spot near the pilot’s feet facing down through a window, 1,500 feet in the sky above Greenland.

The photos he produced, of glaciers melting at the fastest speed these scientists had ever recorded, wouldn’t end up in the pages of a magazine or newspaper but instead on the walls of the USC Fisher Museum of Art and the Natural History Museum of Los Angeles County.

Opening to the public Sept. 18 at USC Fisher, the exhibition Earth Works: Mapping the Anthropocene examines the impact humans have made on their natural environment, specifically how climate change spurred by fossil fuels is wiping out a visible part of our planet. The Natural History Museum, a USC Fisher partner, is also showing selected works.

As much as the works are a snapshot of a moment in time, they are also pieces of history with each material chosen as a painstaking metaphor. The glacier photos — such as “Jakobshavn I,” spanning 11 by 16 feet — are printed on Styrofoam, simultaneously a commentary on the fragility of the subject and the man-made objects that contribute to environmental destruction. 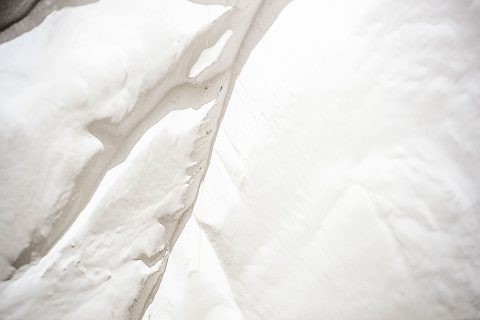 Guariglia printed his glacier photos on styrofoam, a metaphor for the fragility of the subject and also the complicity of humans, who continue to use manmade materials that lead to the degradation of our planet. (USC Photo/Gus Ruelas)

“What we see here no longer exists,” Curator Tim B. Wride said of the glaciers. Yet, the art, will continue to live on.

“It’s carrying complicity because we are a part of this,” he said.

Guariglia didn’t develop the photos traditionally, on film or digitally. Instead, he approached this as an artist, adapting an industrial-size printer to print on linen with polymers made from acrylic (kind of like nail polish). When reprinted several times over, sea ice becomes three-dimensional, rising above the linen.

Also on display are previous works, aerial images of rural China, that utilize pewter and gold leaf. A side-by-side of two farms that depict the impact of mining look like paintings, one very organic and natural — reportedly inspired by Chinese scrolls — and the other stark and modern.

“He comes up with best way to manifest the picture,” Wride said of Guariglia. 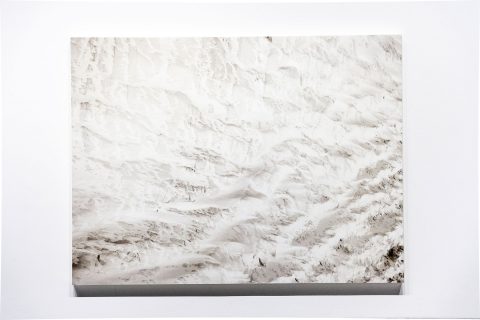 Guariglia flew with NASA’s Operation IceBridge seven times, and climate change is something he never stops thinking about. He has a chart tattooed on his right arm showing how the earth has warmed over 136 years, and on his left, a line measuring the planet’s carbon dioxide levels, according to The New York Times. He’s also developed an app called After Ice, which, after uploading a geotagged image, will tell you when that place will be under water.

“This is about a disaster, but yet you’re sucked into the absolute gorgeousness of it,” she said.

On display through Dec. 8, the exhibition is already generating buzz, ending up on a list of Smithsonian’s top 10 exhibits to see this fall.

Eugene Rogolsky donates his complex collection of artists from the Americas and Eastern Europe.

Elizabeth Holmes Fisher started from humble beginnings to become a renowned collector of the great masters.