Fewer than two or three of every 100 musicians in professional orchestras are African-American or Latino. With that lack of diversity among performers, classical music may feel foreign and out of reach to many.

But a new fellowship based at USC, in partnership with the Inner City Youth Orchestra of Los Angeles and the Los Angeles Chamber Orchestra, aims to change that. It provides rigorous training and support to promising young musicians from underrepresented backgrounds — particularly those of Latino, African-American and Native American descent.

Want to check out the four orchestra fellows in action? Catch them at a special USC Visions and Voices show this month.

Let All Voices Be Heard: Celebrating Diversity in Classical Music

Admission is free, but reservations are required.

“The classical music profession is changing, but the ensembles still largely look the same,” said Robert Cutietta, dean of the USC Thornton School of Music. “It would be wonderful to see players who are more diverse. This initiative is a great first step toward reaching that goal.”

Through the two-year Los Angeles Orchestra Fellowship, four participants receive training in performance, entrepreneurship and teaching. They also mentor young musicians from the local community. And they learn how to take the next step in their career by preparing for auditions with professional orchestras.

USC Thornton is collaborating with the two orchestras to offer the program, the first fellowship of its kind on the West Coast. Funded by a grant from the Andrew W. Mellon Foundation, the initiative provides benefits valued at $140,000 per fellow.

In addition to a full scholarship to USC Thornton to earn a graduate certificate, they receive housing, utilities, a stipend and travel funds to attend auditions, among other perks. They rehearse and perform with the chamber orchestra, gain experience teaching and playing with the youth orchestra and learn from top faculty members at USC Thornton.

“It’s so encouraging to see these three massive organizations in L.A. come together to help us,” said Sydney Adedamola, who earned the fellowship after completing her bachelor’s degree in violin performance at USC Thornton this year. “They really seem to want to learn from us as well, which is really inspiring.”

Adedamola is joined in the fellowship’s first class this year by fellow violinist Ayrton Pisco, violist Bradley Parrimore and cellist Juan-Salvador Carrasco — forming a standard string quartet. They are part of a new wave of efforts to diversify America’s orchestras.

Although the diversity of classical orchestras has grown between 1980 and 2014, according to a recent report by the League of American Orchestras, that increase has been driven in large part by more performers of Asian and Pacific Islander descent. Other groups continue to lag far behind their share of the U.S. population. 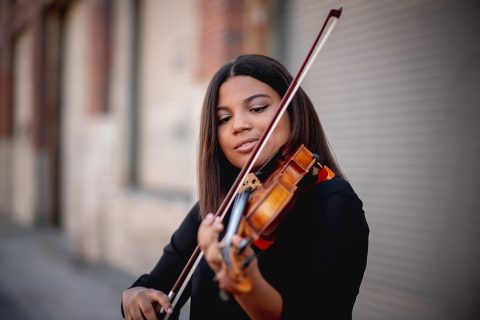 U.S. Census estimates place African-Americans at 13.4 percent of the population and Latinos at 18.1 percent. Yet they only constitute 1.8 percent and 2.5 percent, respectively, of the orchestra workforce, according to the League of American Orchestras.

Adedamola first became aware of the issue during her childhood in a predominately white suburb of Boston. On trips into the city to play with the Boston Youth Symphony Orchestra, she noticed few classical musicians from racially and ethnically diverse backgrounds.

“I didn’t look around and see a lot of people who looked like me,” she said. “Not that it was very disconcerting at the time, but then I came to L.A. and really experienced for the first time what a diverse landscape looks like.”

Cutietta added that Los Angeles is the ideal setting for the orchestra fellowship — a rich, vibrant center of innovative activity and thinking. “The diversity of the city brings so much value to all facets of the arts, and we’d like to see that diversity reflected in American orchestras.”

The orchestra features young musicians primarily from the African-American and Latino communities of Los Angeles. Its chief goal is to educate local youth about classical music and encourage them to consider a career in performance.

“Regrettably, too few people from those backgrounds are engaged in the orchestral world,” Dickerson said. “As a consequence, young people from these two communities rarely get to see anyone who looks like them on stage.”

The fellowship concept grew out of his discussions with the Mellon Foundation, which is providing grants to diversify classical music and music education across the country. Dickerson soon found willing collaborators in the Los Angeles Chamber Orchestra and USC Thornton. He is hopeful that the program will provide role models for local children and teens, including beyond the practice room and stage.

If these fellows can help to inspire these young people, even if it’s not to pursue a career in the orchestra world, we shall have uplifted our country and our industry.

“If these fellows can help to inspire these young people, even if it’s not to pursue a career in the orchestra world, we shall have uplifted our country and our industry,” he said. “We hope all of Los Angeles will rally around these young people and encourage them as they travel this journey.”

Another major benefit of the new fellowship program is guidance from professional musicians on how to approach the audition process. Scott Harrison, executive director of the Los Angeles Chamber Orchestra, said performers have mere minutes to demonstrate proficiency during an audition, and being out alone on stage is often intimidating.

“It’s a very unnatural and strange environment and can be very jarring if you haven’t gone through it before,” he said.

Auditioning can also be expensive. Most orchestras won’t cover travel or lodging costs. Funds from the fellowship ensure that participants can take numerous auditions across the country and get familiar with the process.

“The best thing in our mind would be if one of our fellows won a position early and had to leave the program,” Harrison said. “If they are ready and have it all together, there would be no better problem than to have to refill a spot in the fellowship earlier than expected.” 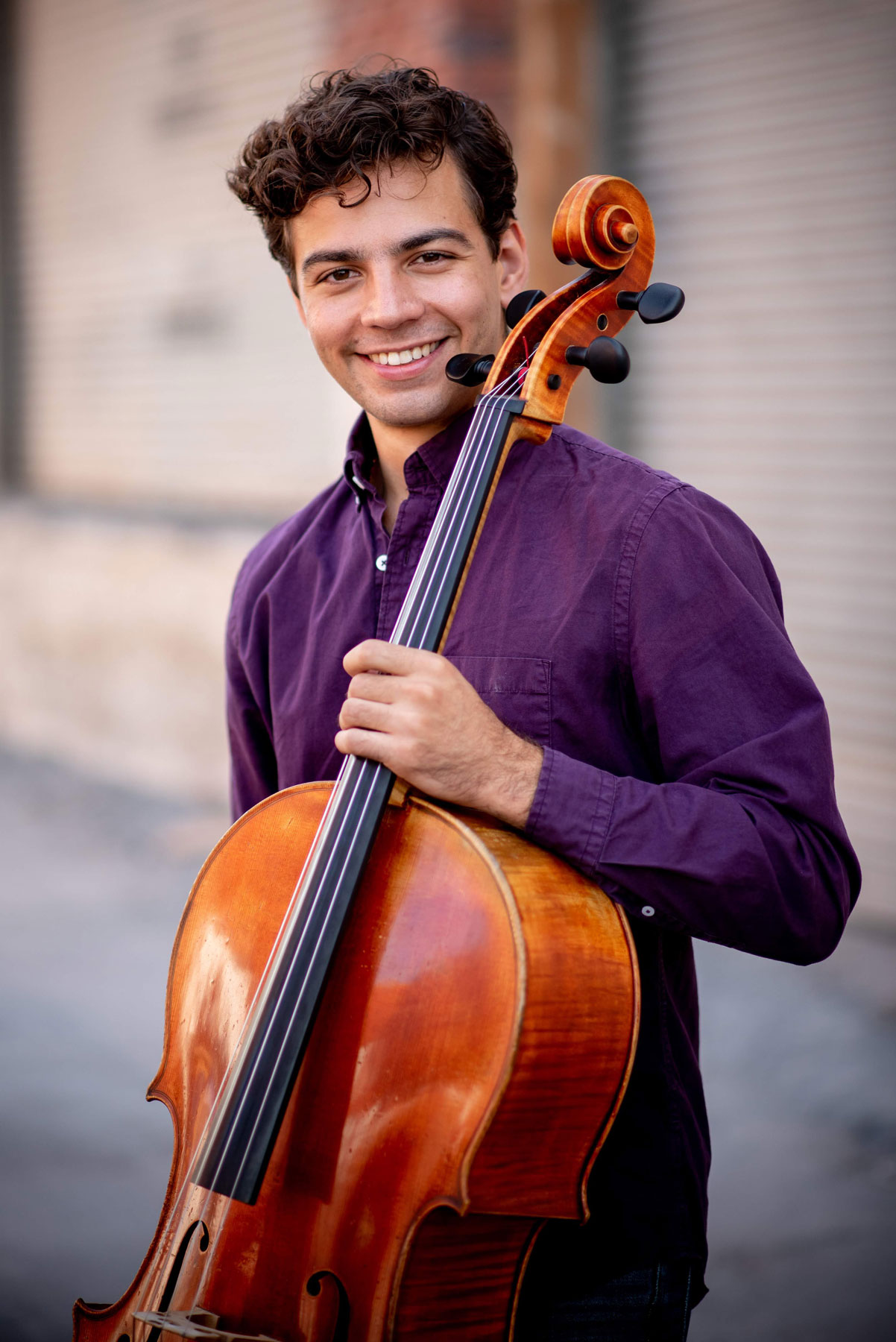 Carrasco acknowledged that auditions can be challenging. Musicians are expected to perform well on the spot. And as they get better, the stakes only get higher.

A veteran of high-pressure situations, including performing for opera legend Placido Domingo, famed conductor Gustavo Dudamel and world-renowned cellist Yo-Yo Ma, Carrasco is the son of English violinist Andrea Sanderson and Mexican filmmaker Salvador Carrasco. He grew up in Santa Monica and attended Northwestern University’s Bienen School of Music as an undergraduate before enrolling in a master’s program at USC Thornton.

Carrasco is still finishing up his degree at USC this semester, and the orchestra fellowship felt like the right bridge between completing his education and launching a professional career.

“Everything this orchestra fellowship offers is precisely what I was hoping to do in the next couple of years,” he said. “I get to start throwing myself into more professional arenas.”

A focus on practical career tips sets fellows up for success

Many music courses focus on the craft, history and theory of classical music, Carrasco said. They only occasionally touch on practical topics like auditioning or finding other ways to make a living, like recording film scores. So he looks forward to learning from professional musicians on how to jump-start his career.

“As a master’s student, I was still honing my craft and spending a lot of time in a practice room with my cello,” he said. “I feel like there’s still a lot more to learn there, but I have to support myself somehow.”

Understanding how to build a network of connections and staying abreast of the latest trends in classical music performance is critical, Harrison said. Los Angeles Chamber Orchestra musicians provide insight during coaching sessions, in addition to teaching master classes and playing alongside the four fellows during performances later this year.

In the highly competitive orchestra world, any advantage or edge is invaluable, Adedamola said. She can now boast about playing with Margaret Batjer, the chamber orchestra’s concertmaster and her faculty mentor at USC Thornton, as one of eight violinists in the group.

“She’s going to be able to hear every note that I’m playing, which is really scary,” Adedamola said. “At the same time, I think it will definitely push me to a level maybe I didn’t even know I could achieve.”

Not only do the fellows have to excel as musicians, but they are also being asked to serve as role models and step into the spotlight as the first scholars to pursue this diversity fellowship.

“Musically, there was no question — they have the goods,” Harrison said. “But they are also creative, they are thoughtful, they are focused, warm and friendly. They are ready to learn and grow.”

To that point, Carrasco expects to learn a great deal by mentoring local teens in the Inner City Youth Orchestra of Los Angeles. He has taught a few private lessons, but he is new to the intricacies of putting together an ensemble and getting performers to play together seamlessly.

He is also excited to share his knowledge, provide encouragement and be a role model for the next generation of diverse musicians.

“It’s a good opportunity for us to give back what we’ve acquired so far,” he said. “We want to set a good tone and standard, and we want to make sure this program continues to thrive long after we move on.”

Math and music merge for Trojan with footholds in two worlds

Paul Chyz grew up with eclectic interests in science and the guitar. USC helped him bring them together.

He began teaching piano students at USC part time in fall 2015 and will become a full-time professor in 2017.