Riding his bike to the University Park Campus, USC transfer student Ethan Ward looks every part the Trojan. He’s wearing a USC hat, a USC lanyard and a USC sweatshirt. He’s enthusiastic and rightly so.

Just like incoming freshmen, he’s new to campus, a transfer from Los Angeles City College. Although Ward always had higher education aspirations, life got in the way.

Coming out as gay to his conservative family was tumultuous. He rebelled, getting into partying and using drugs, and had brushes with the law in his early 20s. It wasn’t until he was 34 that he enrolled at LACC, where he decided to study journalism.

I was totally self-conscious about being homeless. I didn’t tell anyone except my siblings.

But unlike incoming freshmen, while they were enjoying their last year of high school, he was studying at LACC— and living in his car. “I was totally self-conscious about being homeless,” he said. “I didn’t tell anyone except my siblings.”

One thing changed all of that: getting into USC.

His journey to the University Park Campus was untraditional, but so are the hundreds of transfers who make it to the university each year. When it comes to private universities, USC ranks No. 1 for transfer students with roughly 1,450 such students, according to the Association of American Universities. That’s almost as much as all eight Ivy League universities take in combined.

Ward came to Los Angeles at age 28 to try his hand at show business, being a stand-in on TV shows like CSI. But when he started going back to school, that and other part-time work fell off. His apartment’s lease came up for renewal. He knew he couldn’t afford to stay.

That year, he spent most of his time at school, going to classes and staying late studying on campus. When it came time to sleep, he knew a couple of spots in North Hollywood that were safe. Then he’d stretch out his 6-foot-3-inch frame across his 2002 Mercedes Benz CLK, a small coupe, and try to rest. He got up by 6 a.m., so as not to bother residents or workers, and cleaned up at the local YMCA.

A recent adjustment has been having a bed. He remembers moving in over the summer into the bedroom in a shared house off Exposition Boulevard. Laying down in it for the first time, he got emotional.

He notices little things he couldn’t do before, like being able to buy orange juice because he has a refrigerator or being able to use the restroom whenever he wants.

A chance to start over as a USC transfer student 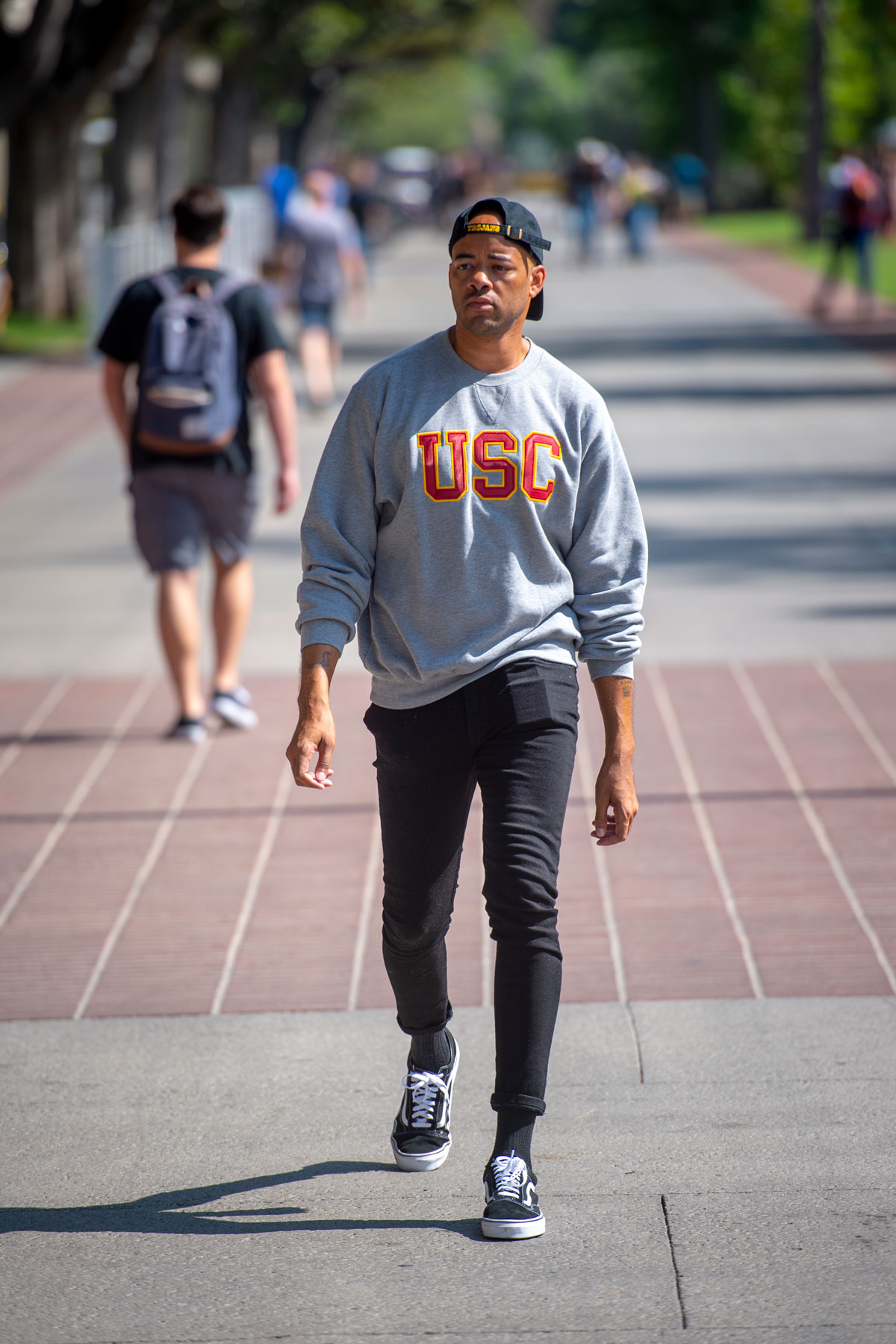 At home on the USC University Park Campus, Ethan Ward appreciates the little things now that remind him how far he has come. (USC Photo/Gus Ruelas)

For Ward, coming to USC is a chance to start over. For much of his adult life, he felt weighed down by the choices he made in his 20s. He was disappointed in himself for hanging out with the wrong people and for not taking advantage of resources he had, like going to school at the university where his mom worked. He was afraid to apply for jobs, worried his past reflected poorly on him — so he avoided applying for 9-to-5 jobs. Instead he took acting gigs and worked for family friends.

But the acceptance he got from USC makes him stand a little taller.

“It just felt freeing,” he said. “I was finally just myself and I ended up getting in.”

He had applied to USC the previous year and wasn’t admitted, but a counselor urged him to apply again and he did, this time changing his essay to be more open about his life. He was accepted and offered a partial scholarship.

He also got into four University of California schools — Berkeley, Davis, Santa Barbara and UCLA — but chose USC because of the USC Annenberg School for Communication and Journalism. He is interested in social justice issues and thinks his experience with homelessness and the justice system might prove useful.

“It changed my perspective,” he said of being homeless. “It made me realize how oblivious I was.”

He is taking classes on reporting and video journalism, with professors who have real-world experience. Ward was worried about not knowing all the software required to do different projects, but was relieved to find out he would learn it in class — just like the rest of the students.

And although he’s lived a bit more than his freshman friends, he blends right in. In the first weeks of school, the former homebody was a social butterfly. He went to LGBTQ events, the Black and Latino student symposium and a panel for incoming transfers. He traded numbers with people he met, making plans to see a movie and a comedy show later in the week.

Ward is reading Shonda Rhimes’ Year of Yes, and is following her advice.

“I’m going to say yes to everything this year,” he said. “I’ve been out like every  day. I’ve met a different person every day.”

When Ward graduates in two years, it will be 20 years after his high school graduation.

“Now [that] I’m here, I don’t want to drop the ball,” he said. “I’m going to show up. I’m going to seize these opportunities coming my way.”

And he is already planning ahead. A master’s program, he said, may be in his future. 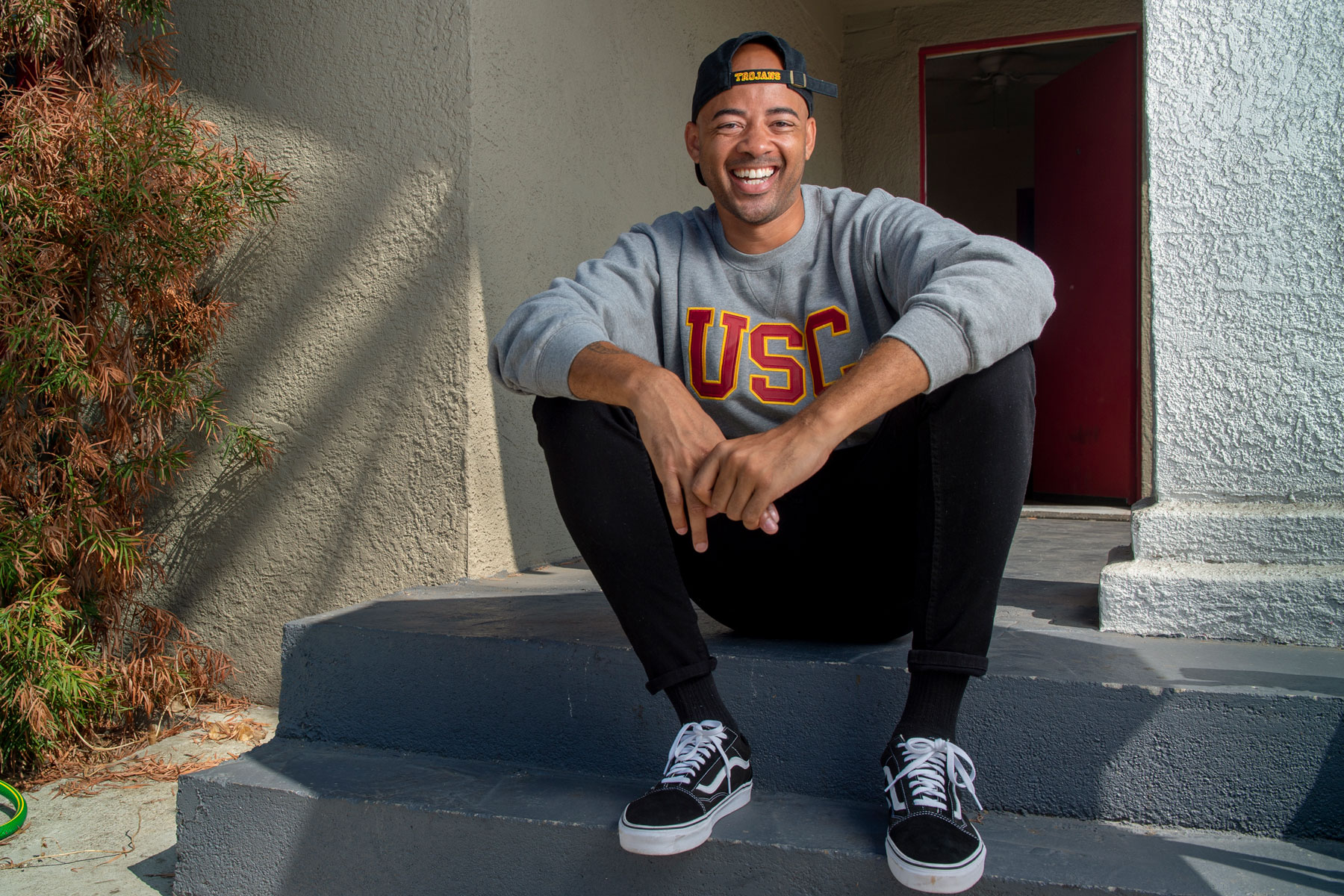 Ward wants to make the best out of the new opportunities at USC. (USC Photo/Gus Ruelas)

A landslide of outstanding applications raises the bar for admits, as average GPA and standardized test scores continue climbing.