Wanda M. Austin had some important words for the gathering of USC faculty and staff who have pledged 1 percent of their salary toward the USC Good Neighbors Campaign.

“You are a very special part of our Trojan family, and tonight’s celebration gives us an opportunity to say thank you,” USC’s interim president said at the Sept. 20 dinner honoring the Trojan donors. “Our Good Neighbors Campaign touches so many lives, in so many ways. Thanks to you, our impact continues to grow.”

In its 24th year, the Good Neighbors Campaign has raised more than $23 million and has awarded over 800 grants that have made a college education a reality for many in the neighborhoods surrounding both the University Park and Health Sciences campuses. 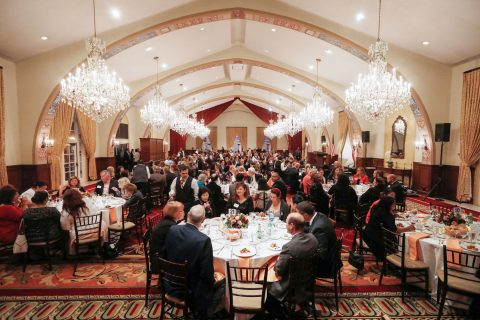 The USC Good Neighbors Campaign has raised $23 million and has awarded over 800 grants in the past 24 years. (USC Photo/Steve Cohn)

The gratitude was destined for a room full of humble donors. “The highlight of the entire evening is to hear the students speak, to hear their stories,” said Ronn Guier, assistant manager for USC Transportation, who has been pledging 7 percent of his salary.

“It’s so inspiring and just the fact that we can be a small part of that is very fulfilling. The university really is a good neighbor to the surrounding community. It gives the students an opportunity, most of them not only are they the first in their family to go to college, most of them are the first that have ever had a chance to even graduate from high school.”

Telling the story was Ariana Torres, who expressed how the community programs funded by the donations have changed an all-too-common narrative in many low-income communities.

“All of my life I heard that people from my neighborhood are not supposed to attend prestigious universities,” she said. “Today, I stand before you, a proud USC sophomore and a Troy Camp counselor. I am now a role model for my community.”

The dinner allows the biggest donors to the Good Neighbors Campaign to see that their contributions are making a visible and tangible impact on the community.

“The first time I came to this event I realized where my contribution was going toward, I realized what USC was really doing in our neighborhoods, and how everyone in the community was benefitting,” said Sabrina Brown, who lives near USC and works for the university’s Department of Public Safety.“Since then I’ve been donating 1 percent, it’s been 15 years that I’ve been donating, it’s been well worth it.”

Torres’ story is a testament to the power of the contributions made annually by over 5,000 employees. “We were right outside this building, when my parents looked to each other and said, ‘It will require sacrifice, but don’t you think our daughter deserves all of this?’” Torres told the crowd. “As I walked through USC’s campus, I knew in my heart, mind and soul that this is was where I was meant to be.”

Since 1972, some 100,000 USC students have taught in classrooms and provided more than a million hours of service to the neighborhoods around the university’s campuses.

USC has historically taken chances on innovative approaches to learning.