It’s 6 p.m. and three women are huddled around an outdoor table, binders out, ready to study.

This week, Vaquita Barnes has been up till 2 a.m. finishing her homework, but thanks to a system she’s devised with Artra Rice-Nelson and K’Loni Luttrell, they might get to bed by midnight.

The three are at USC for the Warrior-Scholar Project, a weeklong course that aims to prepare active service members and veterans for the rigors of a top-tier four-year university. Their days can span 10 hours, discussing their homework in seminars and improving their essay skills with writing and reading workshops. USC faculty such as Jody Armour of the USC Gould School of Law and Dan Schnur of the USC Annenberg School for Communication and Journalism donate their time to give lectures. There’s also skills to help with the transition from military life, including note-taking, time management and information on GI benefits.

The program was developed at Yale University in 2012 by a veteran who wanted to encourage other vets to consider top-ranked schools. Nationally, about 1 percent of U.S. veterans go to top-tier universities; most veterans, about 6 out of 10, go to for-profit and community colleges, according to the American Council on Education. But among Warrior-Scholar Project alumni, nearly 4 out of 10 are enrolled at some of the best universities in the nation. 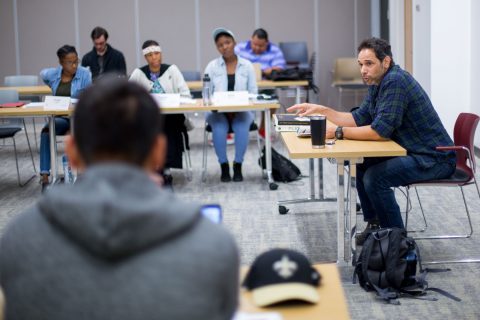 The project presents courses at 17 universities across the U.S. such as Princeton University, the University of Arizona and Texas A&M University. USC is the project’s only partner in California, participating since 2015. It’s free of charge, but participants pay for travel.

Warrior-Scholar Project participants get to work

USC has a long history of supporting its veterans. It was a training post during World War I and World War II and kept its now-78-year-old ROTC program going when others across the country folded. It’s also a Yellow Ribbon School, which means the U.S. Department of Veterans Affairs will match USC’s contribution. Right now, there are 192 undergraduate veterans and 851 veterans in graduate programs.

There were 16 participants at USC’s Warrior-Scholar course from Aug. 4-12, including the three women — the most female participation so far in the USC course. The number is on par with the number of women in the military, which is roughly 80 percent male, according to the program.

Barnes, Rice-Nelson and Luttrell all served in the Navy — the latter two still active while Barnes is out.

They didn’t know each other before this week, even though Rice-Nelson and Barnes worked on the same ship. To be fair, there were about 5,000 people on the ship. 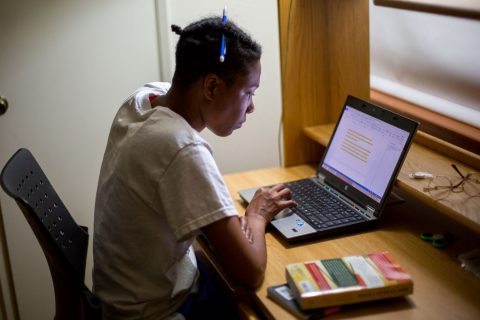 But they quickly became buds by putting their military skills to use — creating a study system and delegating necessary duties for the overall success of the group.

“We created our own network within the Trojan network,” Barnes, of San Diego, joked.

Their homework on a recent night involved a lot of reading, five texts in all, from the Gettysburg Address by Abraham Lincoln to Ain’t I a Woman? by Sojourner Truth and What to the Slave is the 4th of July? by Frederick Douglass.

But instead of trying to cram dozens of pages, they split it up. They have a group text where they send pictures of important passages.

Then they touch base at breakfast.

“At breakfast we have our meeting — our breakfast meeting — where we discuss everything,” said Rice-Nelson, 24, who is based in Oklahoma City.

“We pretty much debrief: We have the meat and potatoes highlighted,” Barnes added.

The week has been eye-opening for the three, who are used to the regimented day-to-day duties of running a ship. This week, they’ve been asked for their opinions. 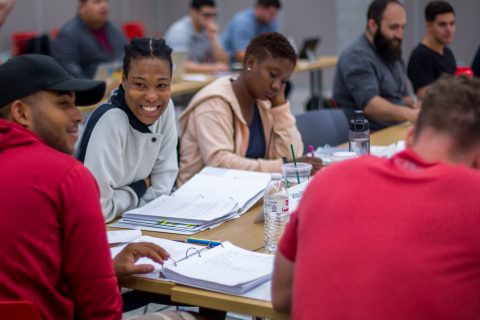 “The title of my paper was ‘de Tocqueville ain’t nobody,’ ” Rice-Nelson said. She argues that it was hypocritical for him to simultaneously praise the U.S. while noting slavery.

Barnes points out it was the age of exploration — people from all over the world were curious about the U.S.

“The nerve of you to come to my country … and try to evaluate something you did not grow up in,” Rice-Nelson went on. “That’s like somebody coming from Beverly Hills and, what’s the hood here — Compton — and he’s trying to tell you about your hood.”

These are conversations they admit they’d never have on the ship.

From service to full-time life at the university

Besides that, there’s just the overall transition to full-time university life. Their lives are much different than they were when they graduated high school. Rice-Nelson has two kids to look after. Luttrell is married. This is all normal for veterans, who tend to be older when they go back to school — which means sometimes it’s been years or even decades since they’ve been in a classroom.

Barnes, who has a traumatic brain injury and chronic PTSD from a military sexual assault, said cognitive limitations make school a bit harder — but she takes advantage of resources, like extra test time.

But despite the challenges of the transition, the week left the women feeling empowered.

They all plan to apply to USC. And they’ll be there to support each other along the way. They already have the group text started.

The first-time ceremony uses ashes to symbolize the visible wounds of battle — and the invisible sacrifices — made by men and women who serve their country.

The weeklong bootcamp prepares vets for an academically rigorous environment, and USC is the only California school that participates.

USC, with its long history of supporting veterans, is one of just 12 campuses across the country that participate and the only school in California.

Veterans, active military get a taste of life at a top university