The next great young journalist or storyteller is out there somewhere in Los Angeles County.

Maybe she is an avid high school newspaper reporter who dreams of writing for a major national news outlet. He might be a video whiz who wants to use multimedia to promote a nonprofit. Thanks to the Annenberg Youth Academy for Media and Civic Engagement, those teens are gaining the tools needed to succeed in today’s fast-paced media landscape.

The intensive summer training program at the USC Annenberg School for Communication and Journalism is teaching many young scholars how to become journalists, web producers, digital videographers and more. The academy focuses on drawing participants from schools near USC to reach students who might not have envisioned a career in media.

“I’m a firm believer that in these communities of South L.A., Compton, Watts, the next big reporter, the next big storyteller is there,” said Jaime Carias, USC Annenberg’s civic engagement coordinator. “Unfortunately, because of where they are living, they might not have the same opportunities as other students. It’s our duty to provide that open door for them.”

For many of these students, this could be the game changer that really pushes them toward a career in media.

“They are learning how to shoot video, how to edit, they are in the studio — they are getting the opportunity to put their skills to the test,” Carias said. “For many of these students, this could be the game changer that really pushes them toward a career in media.”

The academy also helps participants get a feel for the college experience and learn about USC Annenberg’s undergraduate programs. For local teen Alexis Johnson-Fowlkes, the summer program affirmed her passion for journalism. She now envisions earning a degree in broadcast journalism and becoming an on-camera news reporter. 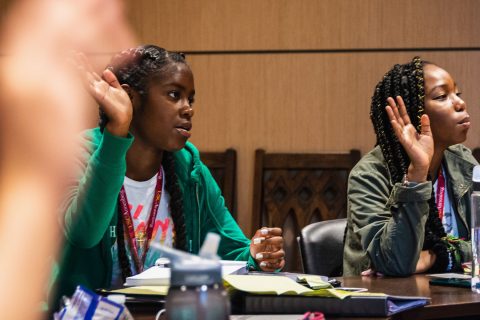 “I’ve always wanted to pursue this career, but I never really had the opportunity to learn about it in depth,” the 16-year-old said. “This program has definitely given me a lot more insight into journalism, communications, public speaking and civic media.”

She reveled in the opportunity to step in front of the camera in the school’s high-tech media center. She shot and polished her first video using the latest editing software. She interviewed USC Annenberg Dean Willow Bay, too, although she admits she was a little nervous at first.

“I just loved it, and learned a lot,” Johnson-Fowlkes said.

As she enters her senior year this fall at the nearby Ramón C. Cortines School of Visual and Performing Arts, Johnson-Fowlkes is already sketching out her plans for college.

“USC is my top choice,” she said. “After being in this program, that certified it for sure.”

As dean, Bay emphasizes community engagement. It’s important that the school does its part to ensure that graduates and future communicators reflect the diverse communities they serve. She sees those efforts as upholding the mandate of the school’s namesake, Walter Annenberg, “to be of service to all.”

Through the summer youth academy and other initiatives like Annenberg High School Day, Bay said hundreds of local scholars from underserved communities can share their stories, connect with others and develop valuable skills. Donations to the school’s community engagement fund from alumni, parents and others provide support for the Annenberg Youth Academy for Media and Civic Engagement and other similar outreach programs.

Bay, who led a session at the academy on smartphone use, is one of dozens of faculty members and media professionals who shared their insights with students during the program. Other experts discussed pressing topics like the rise of fake news and how to determine the legitimacy of a media source.

Although he is leaning toward a career in business, Joshua Manzo, 15, said that many lessons in the academy were relevant to him, especially sessions on persuasive writing and effective communication. The rising junior at Synergy Quantum Academy High School knew little about communications and journalism when he spotted an alert about the USC Annenberg summer program in his high school newspaper and decided to apply.

I wanted to see what it was like to be involved in journalism. The first day, they told us to write a lede. I had no clue what that was.

“I wanted to see what it was like to be involved in journalism. The first day, they told us to write a lede,” he said, referring to the first few sentences of a news story that are designed to drawn in readers. “I had no clue what that was. Our professor taught us the basics and fundamentals.”

This year’s academy culminated with final projects ranging from videos and podcasts to news stories and photo essays. Participants invited their family, friends and teachers to show off their work during the closing day of the program.

Carias said a broad goal of the academy is to increase media literacy and diversify the media workforce. The application process reflects that, he said: Organizers don’t necessarily look for students with the best grades, but instead strive for a balanced and diverse cohort.

“We look at their critical thinking skills, how they analyze things, how they view the world,” he said. “Our goal is to bring kids from different parts of the city who can bring their diverse perspectives into the classroom to have engaging conversations.” 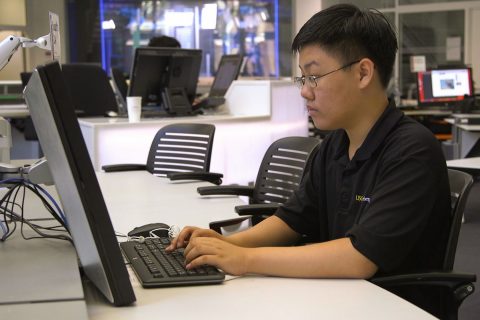 Michael Tseng attended the summer academy at USC in 2017 and became editor-in-chief of the online magazine put together by participants. (Photo/Olivia Mowry)

Michael Tseng, a senior at Arcadia High School who attended last year’s summer academy at USC, said he found that mix of viewpoints to be one of the most valuable aspects of the program.

“Being able to meet people from different places and backgrounds is really important to learn more about the world, learn from other people’s personal experiences, and see how you can handle working with others,” he said. “It turned out to be one of the best summer experiences I ever had. I’ve made so many friends I still keep in contact with.”

Tseng grew up with a passion for news. He became editor of his middle school paper, wrote for his high school paper and became a communications intern for the school district. He also contributed articles to Arcadia Weekly.

Seeking more knowledge of how professional newsrooms operate, he jumped at the opportunity to spend a month at USC Annenberg last summer. He got plenty of insight as editor-in-chief of an online magazine put together by academy attendees, which they dubbed The AYA Woke Times.

The experience confirmed Tseng’s zeal for journalism and inspired him to apply to USC. He starts taking courses this fall as a freshman at USC Annenberg. Thanks to a Wallis Annenberg Scholarship and Sewell Family Endowed Scholarship, much of his tuition will be covered for his first year.

“The program did solidify my belief that I should go into journalism,” he said. “It is a great breeding ground for the leaders of tomorrow.”

For more information about the Annenberg Youth Academy for Media and Civic Engagement, including how and when to apply, visit the academy’s website.

The accomplished educator has played a prominent part in developing and teaching a wide range of courses that explore rhetoric, debate, political communication, propaganda and global media.

“Show up, do the work, get your hands dirty,” the media mogul tells a captivated crowd at the school’s commencement ceremony.

The chair’s first holder is Josh Kun, USC professor and historian who uses music to examine the connections we have to each other.