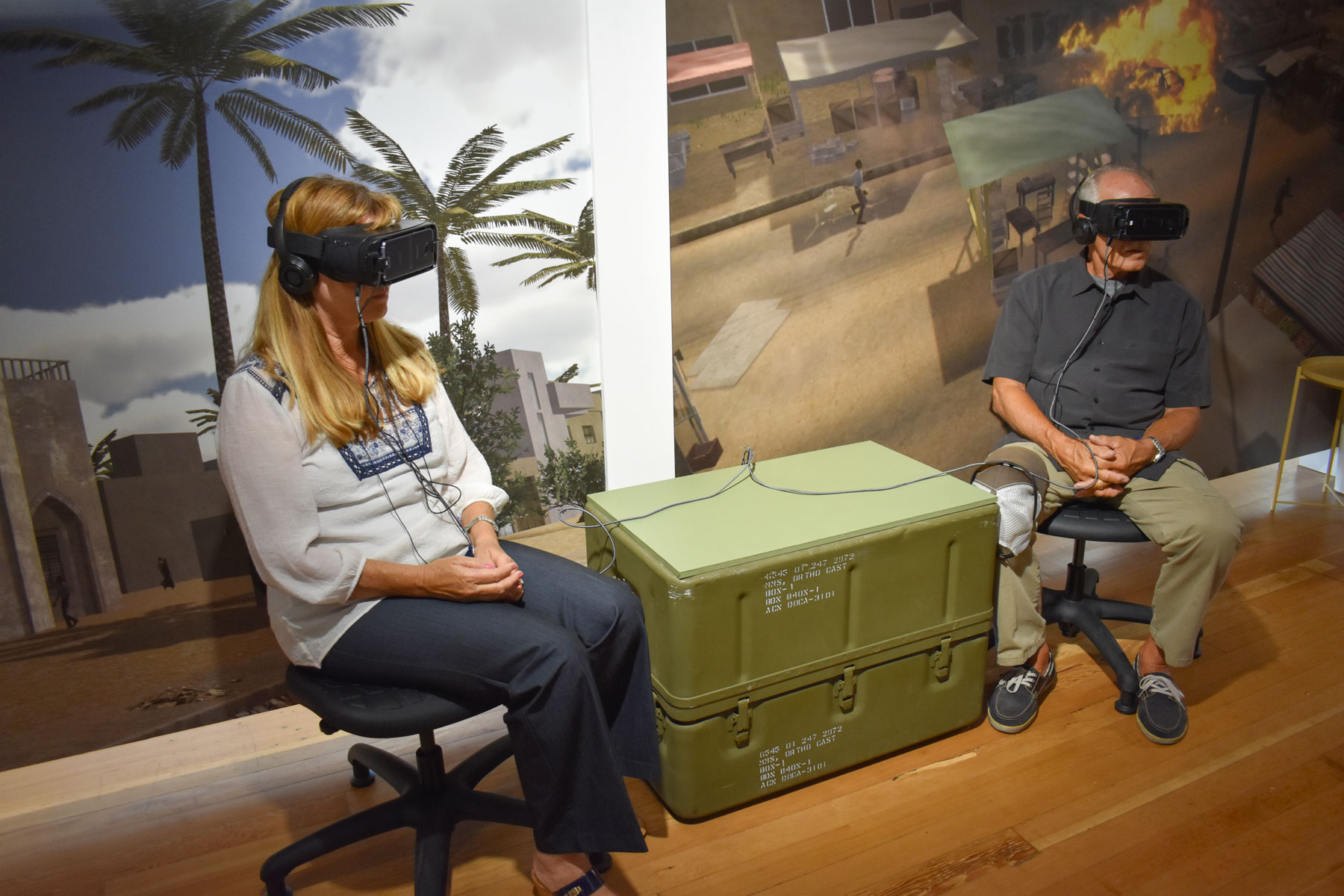 Orange County fairgoers can try Bravemind, the therapeutic virtual reality tool to get an idea what an Iraq veteran’s combat experience was like. (Photo/Courtesy of Terry Moore)

For veterans, the traumas of war can take a mental toll, with 1 out of 5 veterans serving in Iraq or Afghanistan returning home with PTSD.

Putting on a brave face and pushing these memories to the back of their minds is a common coping mechanism. But USC psychologist Albert “Skip” Rizzo finds that reliving those memories with the help of virtual reality can help.

“These folks spend months if not years trying not to think about it,” said Rizzo, director of medical virtual reality at the USC Institute for Creative Technologies. “With VR, we put you in a scene that’s reminiscent from a safe distance.”

He developed Bravemind, a virtual reality experience that can be tailored to the service member — bringing them to a marketplace in the dead of night, or encroaching on a village in a Humvee as the sun beats down. There’s a scent machine, a platform they can stand on that vibrates and a firearm to hold.

Special for the public

And while it’s been available to service members across the U.S. via clinicians at Veterans Affairs facilities or university clinics, it’s now available for the public to experience.

Starting Friday, the Orange County Fair’s veterans museum Heroes Hall will exhibit Bravemind, including everything from USC research on the therapeutic tool and general information on PTSD to a virtual reality experience. Since this Bravemind installation can’t be tailored as usual for each user or operated with a clinician, USC and the OC Fair developed a unique VR experience, with a veteran narrating as a story plays out: a day out at an Afghan market that’s soon interrupted with explosions and gunfire.

See a preview of the exhibit. (Story continues below.)

“The museum is really dedicated to the veterans and the stories they tell,” said OC Fair Exhibits and Education Director Joan Hamill. And part of that story is PTSD.

“I think seeing this VR experience will be really moving,” she said.

The fair, which opens the same day, gets 1.3 million attendees over its 21-day run, she said. It’s possible that thousands will get a chance to immerse themselves in the world of a veteran.

Also on display are items donated by Chris Merkle, an Orange County-based Marine who served 14 years in Iraq and Afghanistan. Among the items: helmets, body armor, personal photos and even a flag confiscated from Saddam Hussein’s house.

Merkle used Bravemind for his PTSD. It wasn’t easy at first.

“It took six months for me to say ‘OK,’ ” he said about trying it the first time. “I don’t want to be immersed in my worst nightmare.”

But once he was handed the firearm, he was there.

If you go: Heroes Hall

“It gives you that connection to your physical memory,” he said of the weapon. “You carry it every day. You always motion with it. It’s like your iPhone.”

All of a sudden, he was speaking in present tense — back in Iraq, entering a city in an open-bed truck with dozens of other Marines, all under heavy fire. He watched as the heavily armored vehicle they followed was blown up.

Enlisting at age 17, all he knew of war was what he saw in the movies. Now he was in one.

After doing Bravemind the first day, he was a little sick. Part of it was the VR itself, doing it over and over, but part of it was reliving that day.

Merkle, who used to describe himself as an “angry guy” because of his PTSD, is now hoping to help others. He’s halfway through a PhD in clinical psychology. He said he’s kept at it because of the mental health professionals who helped him.

“My hopes are that it reduces the stigma of PTSD,” he said of the exhibit. “There’s the physical wounds of war and the invisible wounds of war. And it’s like an infection. If you don’t treat it, it will get worse.”

A recent trial showed that when given the choice, most participants preferred the option of exploring their traumas in VR — 75 percent — over simply picturing it in their minds, according to Rizzo.

“It’s not just good enough to have an efficacious evidence-based treatment,” Rizzo said. “You have to break down barriers to care. You have to get the word out. You have to show families and veterans suffering with this that PTSD is not a life sentence.”

The exhibit will run through the fall. The museum intends to expand the VR component, adding additional experiences, after the fair is over in August.