Taking the lead in community policing has paid off at USC.

Fourteen officers presented their capstone projects undertaken through the Law Enforcement Advanced Development (LEAD) program at a ceremony held earlier this month in Los Angeles. LEAD is a partnership among the Los Angeles Police Department, the USC Price School of Public Policy and the USC Suzanne Dworak-Peck School of Social Work.

Over the course of the program, officers learned evidence-based techniques to reduce the need for force and become better prepared to face today’s complex policing issues such as homelessness, mental illness, domestic violence and human trafficking.

We’ve been so excited to have this collaboration with USC to try something out of the box.

“We’ve been so excited to have this collaboration with USC to try something out of the box,” said Luann Pannell, director of police training and education at the LAPD, at the capstone event in Los Angeles. “We hope our officers know this is a welcoming environment. We’re all here because we want to learn about your projects and what you’ve done, so we can springboard from the ideas you’ve generated and things you’ve already started, and look at where we can go next.”

Community policing: And the award goes to … 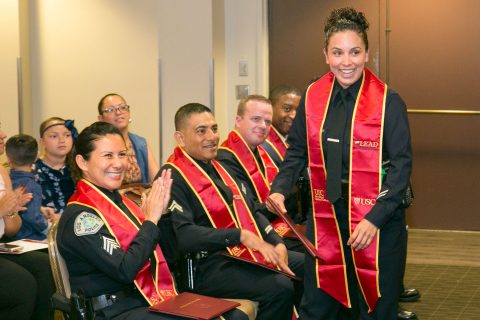 Cecilia Frausto, whose Southwest Division responds to an average of five domestic violence calls a day, received an award for best capstone for her idea to send Youth Service Officers out of the Community Relations Office, where she was formerly assigned, to take part in domestic violence calls in which children are present. She received the award and a $500 prize at USC during the first LEAD Certificate Ceremony, attended by LAPD Chief Charlie Beck days before his June 27 retirement.

“The LEAD program facilitated an opportunity for officers to critically examine the needs of their communities and customize interventions using a holistic approach,” said Rosemary Alamo, clinical associate professor at the USC Suzanne Dworak-Peck School of Social Work, who served as a capstone project adviser. “Hearing the innovative ideas these officers developed using their unique perspectives and years of experience to make L.A. communities better for everyone was gratifying.”

Joe Sanchez offered a solution for a problem at the core of LEAD’s mission to train officers to be able to address the complex challenges they encounter in 21st-century policing. He developed an operational smartphone app to assist officers with day-to-day duties by providing them a guide consisting of up-to-date phone numbers for additional resources that might be required by a citizen or victim. The app also has a referral page from which officers can request services for citizens or victims they meet.

Sgt. Jesse Ojeda suggested the LAPD partner with the Los Angeles Homeless Services Authority to create a program, similar to the Gang Reduction Youth Development program, using formerly homeless people as advocates to provide personal perspective and re-educate those who are currently displaced.

I liked how the officers tried to address what are common problems they’re seeing.

“I liked how the officers tried to address what are common problems they’re seeing,” said USC Price Professor LaVonna Lewis, who attended the event in her position on the LAPD Professional Advisory Committee. “For some of the issues, it was hard to figure what exactly is the LAPD’s role, so I wanted to hear more about what could be done with partnerships, but they were important topics to talk about and put on people’s radar.”

A reason to be proud

USC Price Professor Erroll Southers, director of the Safe Communities Institute, encouraged the officers to be proud of the effort they made, dedicating time around their work schedule to take part in the inaugural offering of the LEAD program.

“I’ve been hearing from chiefs and commissioners from around the state who want to send their team to this program,” Southers said. “One day, we’re going to look back at what is a national model that started here.”

Officers will learn techniques on how to deal with the homeless, mentally ill and domestic abuse survivors.

The university and the department honor the civil rights leader’s ongoing legacy.