Films like Crazy Rich Asians, The Spy Who Dumped Me, BlacKkKlansman and The Happytime Murders are poised to provide a much-needed dose of diversity to theaters this summer. But as audiences look to critical reviews to determine if these movies are worth the ticket price, what perspectives are available? A new study from the USC Annenberg School for Communication and Journalism reveals that the film reviewers are unlikely to be as diverse as the casts they are critiquing.

The report, titled “Critic’s Choice?” is the first from Associate Professor of Communication Stacy L. Smith and the  Annenberg Inclusion Initiative to investigate inclusion among film reviewers, and examines access and opportunity for film critics. The report uses reviews of the 100 top grossing films of 2017 posted on the site Rotten Tomatoes to assess gender and race/ethnicity of critics, finding that reviewers are overwhelmingly white and male.

Of the 19,559 reviews evaluated, 22.2 percent were written by females, with 77.8 percent crafted by male critics — 3.5 males to every 1 female reviewer. White critics wrote 82 percent of the reviews and critics from underrepresented racial/ethnic backgrounds authored 18 percent.

“The very individuals who are attuned to the under- and misrepresentation of females on screen and behind the camera are often left out of the conversation and critiques,” said Smith, founder and director of the Annenberg Inclusion Initiative. 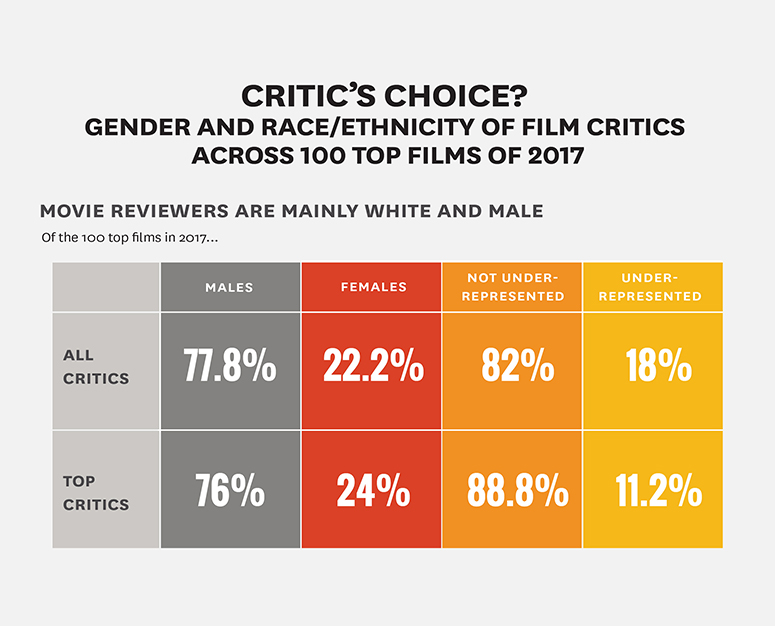 “Even among top critics, the words of white and male critics fill a greater share of the conversation than females and people of color,” said Marc Choueiti, the study’s lead author. “Re-examining the definition of a top critic or simply casting a wider net can be the opportunity to open up and diversify the voices heard in the critic space.”

The researchers assessed the percentage of female and underrepresented film reviewers for each movie studied, and not one of the 100 films achieved gender-balance in its pool of critics.

“This report reveals the absence of women of color working as reviewers — especially on movies built around female and underrepresented leads,” Smith said.

The authors propose several solutions for groups that work with or educate critics. Most notably, they offer a set of target inclusion goals for the field. “Groups should think of the phrase 30/30/20/20—this is the U.S. population breakdown for white males, white females, underrepresented males and underrepresented females,” Smith said.

The report is the latest from the USC Annenberg Inclusion Initiative, and the first in a series on critics.

An extended version of this story appears on the USC Annenberg website.

Findings explore the connection between negative portrayals of seniors and their effect on mental and physical health.

The research and advocacy think tank will focus on increasing diversity on screen, behind the camera and in music.

Study finds film critics, like filmmakers and casts, are largely white and male