Adam Huttenlocker has found more than 500 fossil vertebrates during his 13 years as a paleontologist, but the proudest find he has been associated with has been a nearly 130-million-year-old fossilized skull unearthed by colleagues in eastern Utah. Huttenlocker, assistant professor of clinical integrative anatomical sciences at the Keck School of Medicine of USC, and his colleagues named the new species Cifelliodon wahkarmoosuch. He says it bridges the evolutionary journey from reptiles to mammals and is evidence that the ancient landmass Pangea did not completely separate until 15 million years after previous estimates. Huttenlocker answers some pressing questions about the unique fossil.

(Animation/Jorge A. Gonzalez, Keck School of Medicine of USC)

Why is this fossil significant and how does it add to our understanding of evolution and ourselves?

By studying its anatomy and performing an evolutionary tree analysis, we found that Cifelliodon belonged to a long-lived and widespread group of early mammal relatives called haramiyidans. These early mammal relatives included the closest relatives of the common ancestor of all true living mammals (e.g., the egg-laying platypus, kangaroos and placental mammals). So, the 3D preservation of Cifelliodon gives us rare insights into the origins of mammalian anatomy, brain structure, behavior and even the biogeography of the early mammalian radiation.

Why was Cifelliodon wahkarmoosuch identified as a new species rather than placed within either the ancient reptile or mammal families?

The fact that the skull looked so primitive compared to other known mammal groups from the Cretaceous made figuring out its relationships extremely difficult. It shows some unique dietary specializations that are seen in only a handful of groups that lived during the age of dinosaurs. Ultimately, the structure of the preserved molars showed clear similarities to some neglected fossil teeth from Northern Africa. So we think that Cifelliodon represents an archaic offshoot whose relatives may have dispersed into the southern continents and became fairly successful during the Cretaceous.

Are there many other animals that have been placed in this unique evolutionary spot that bridges the reptile and mammal transition? If so, how does this find compare to the others?

Researchers have pinpointed a number of early mammal relatives — including docodonts and haramiyidans — as the closest relatives to the common ancestor of living mammals. Other scientists have at times placed Cifelliodon’s haramiyidan relatives within the mammalian crown group or placed them as a close sister group to mammals. 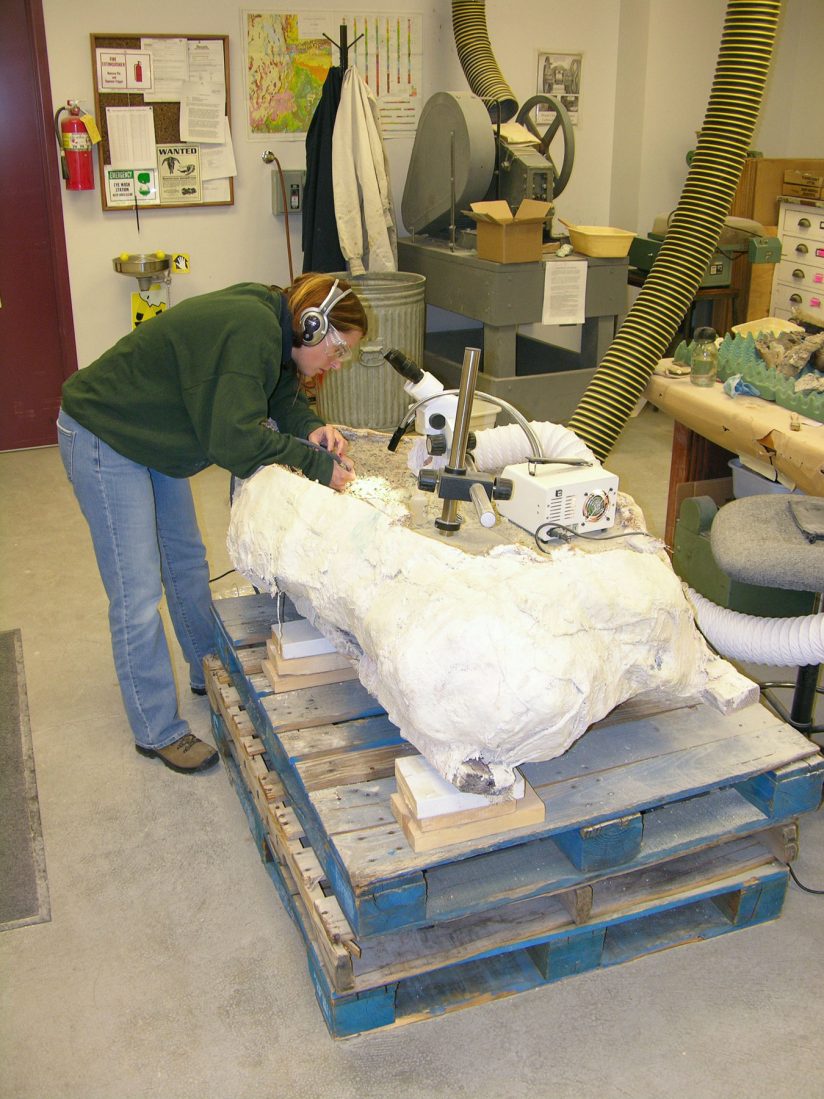 Researcher Jennifer Cavin opens a block containing a fossil of the dinosaur Hippodraco scutedens, before reporting that she had discovered the unexpected Cifelliodon skull below the Hippodraco foot. (Photo/Jim Kirkland, Utah Geological Survey)

Although haramiyidans have a long fossil record spanning the Triassic through the Cretaceous and were known from both the Northern and Southern Hemisphere, their fossil record was mostly based on isolated teeth and jaws and poorly associated skeletal fragments. In the early 2000s, articulated skeletal material was discovered in lake beds in China, but their crushed, two-dimensional shape made their anatomy difficult to interpret and, thus, their relationships difficult to resolve. The three-dimensional preservation of Cifelliodon highlights the primitive brain, palate and feeding structure of this special group and reinforces their position near the base of the mammalian family tree.

How does the fossil suggest that the Pangea landmass continued to separate about 15 million years later than previous estimates?

It’s generally thought that the northern and southern continents, as well as Europe and North America, were completely separated by the end of the Jurassic Period [about 145 million years ago]. The problem is that the earliest Cretaceous record is not as well studied in North America or in Africa, making it difficult to compare continental vertebrate assemblages.

Based on intense fieldwork taking place now in the basal Cretaceous of Utah and in Europe, there is evidence of a “North Atlantic Land Bridge” that may have connected the Old and New Worlds into the Cretaceous. Shared dinosaur groups found in Africa and Europe — described as recently as this year — further present the possibility that similar connections existed between the southern and northern continents, transforming our understanding of the timing and order of the Pangean supercontinent’s breakup.

The Utah deposits in which Cifelliodon was found have been dated using radioisotopes to about 125 to 130 million years old. These dates make the Utah deposits a vital datum that scientists can use to ratchet the timing and geographic extent of this interchange.

What does this fossil tell us about early mammals?

We think that Cifelliodon represents a subgroup that may have dispersed into the southern continents and became fairly successful during the Cretaceous but became extinct in the Northern Hemisphere shortly after the landmasses separated.

The closest anatomical relative of Cifelliodon is a tooth from Morocco whose shape has puzzled paleontologists for decades because it matched no other known mammal from that time. The tooth – called “Hahnodon’’ – and others like it from Morocco had been attributed variably to haramiyidans or multituberculate mammals. Among these southern descendants could also be the “Gondwanatheres,” a weird and enigmatic group of rabbit-like herbivores that were thought to be completely endemic to the southern continents but became extinct during the End-Cretaceous global catastrophe that also extinguished the non-avian dinosaurs.

Newly discovered fossil is the oldest of its kind

The sea urchin fossil found by a USC team had been buried in a rock formation that dates back nearly 270 million years.

Why you should care about this 130-million-year-old fossil