USC researchers have pinpointed a remedy to prevent the spread of triple-negative breast cancer. Metastatic breast cancer is a leading cause of death for women. The findings appear today in Nature Communications.

In addition, few treatment options target metastasis— cancer that has spread. And typically, “these treatments are associated with high toxicity,” said Min Yu, an assistant professor of stem cell biology and regenerative medicine, and a principal investigator at the Eli and Edythe Broad Center for Regenerative Medicine and Stem Cell Research at USC, and the USC Norris Comprehensive Cancer Center. 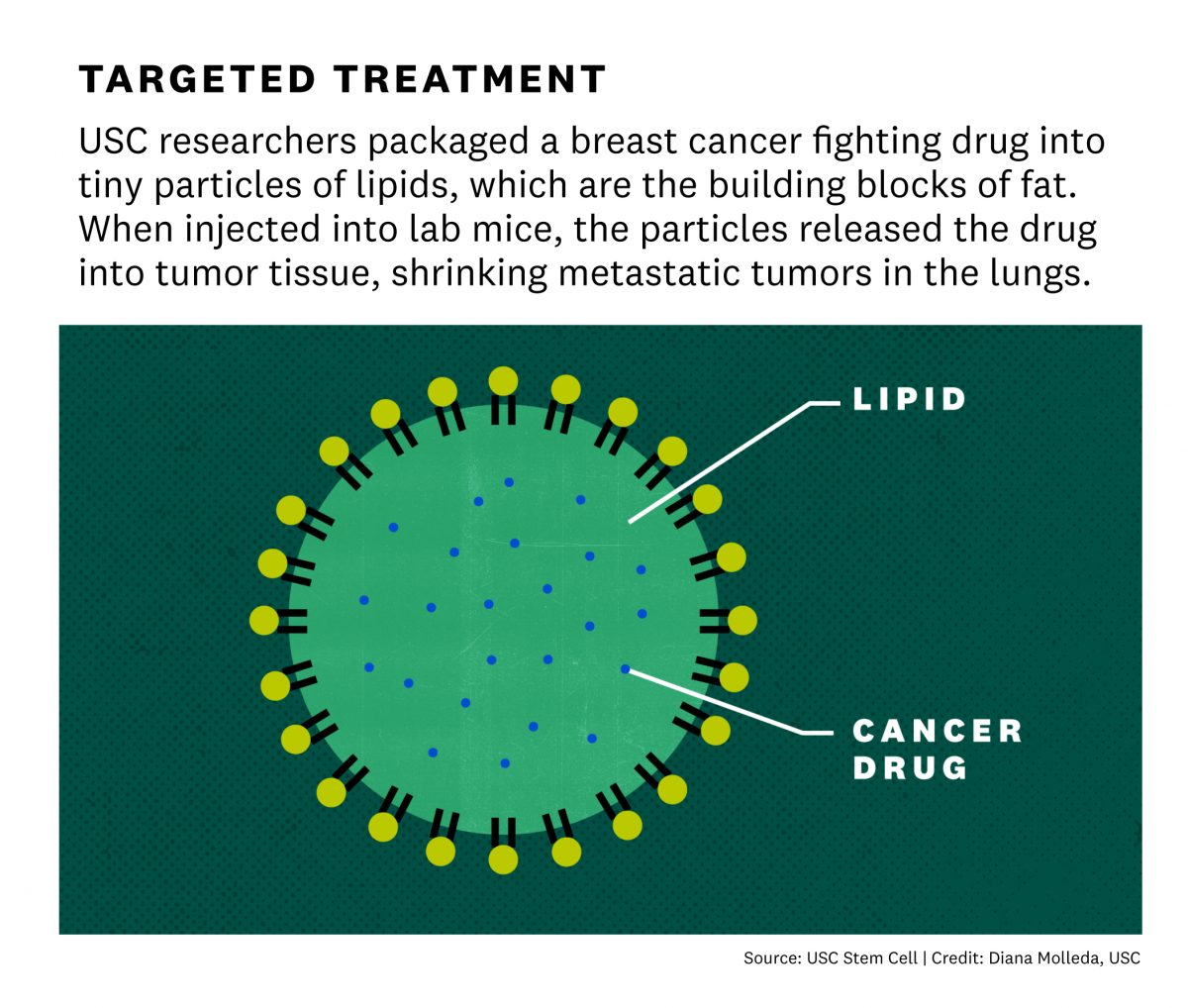 “A better understanding of tumor cells and their interactions with organs and tissues could help us design targeted therapies specific for metastasis.”

In Yu’s laboratory, postdoc Oihana Iriondo and her colleagues showed that by inhibiting a protein called TAK1, they were able to reduce lung metastases in mice with triple-negative breast cancer. It appears that TAK1 enables malignant cells from the breast to survive in the lungs and form new metastatic tumors. Metastases are the most common cause of cancer-related death.

There’s already a potential drug, called 5Z-7-Oxozeaenol or OXO, that can inhibit TAK1 — and presumably make it much more difficult for breast cancer cells to form lung metastases. However, OXO is not stable in the blood and wouldn’t work in patients or preventing metastatic spread of breast cancer.

To overcome that obstacle, Yu and her lab teamed up with the laboratory of Pin Wang at the USC Viterbi School of Engineering. Wang’s team developed a nanoparticle – consisting of a tiny fatty sac – that works like a smart bomb to carry drugs through the bloodstream and deliver them directly to tumors. The scientists loaded this nanoparticle with OXO, and used it to treat mice that had been injected with human breast cancer cells. While OXO did not shrink primary tumors in the breast, it greatly reduced metastatic tumors in the lungs with minimal toxic side effects.

“For patients with triple-negative breast cancer, systemic chemotherapies are largely ineffective and highly toxic,” Yu said. “So nanoparticles are a promising approach for delivering more targeted treatments, such as OXO, to stop the deadly process of metastasis.”

Metastatic breast cancer is also classified as Stage 4 breast cancer once it’s spread to other parts of the body, usually the lungs, liver or brain. It reaches these organs by penetrating the circulatory or lymph system and migrating through blood vessels, according to the National Breast Cancer Foundation.

Breast cancer is the most common cancer in American women, except for skin cancers, and the average risk of developing breast cancer is 1 in 8 for a woman in the United States, according to the American Cancer Society. About 266,120 new cases of invasive breast cancer are diagnosed in women each year, and about 40,920 women will die from it, the ACS estimates.

The USC research is in early-stage development using animal tests. The method the researchers discovered shows promise, but more research will be needed before it could be applied to humans for treatment.

Few people have shaped the fight against cancer at the USC Health Sciences Campus more than the family whose generous philanthropic support has spanned decades.