The enthusiasm and concentration are almost palpable as a group of first- through third-graders contort themselves into Pretzel Pose on their yoga mats before assuming Cobra Pose and then relaxing into Child’s Pose.

After demonstrating each position, Tina Koneazny, associate director of administration and educational outreach at the Joint Educational Project, moves among her charges, gently helping a student correct a pose and giving words of praise and encouragement.

In Los Angeles, yoga tends to be associated with affluent women on the city’s West Side, but JEP, one of the oldest and largest service-learning organizations in the U.S., is teaching this ancient Indian physical, mental and spiritual practice to underserved elementary students in L.A.’s inner city schools. Why?

As Koneazny explains, yoga can have a profoundly positive influence on the lives of young students, many of whom need the benefits it can bring. All too often, inner-city children face considerable stress in their everyday lives — a result of poverty, proximity to gang violence and, increasingly for many, the fear that their families could be torn apart by deportation.

A 2014 study by the Centers for Disease Control and Prevention found that almost a third of inner-city children in the United States suffer from post-traumatic stress disorder at a higher level than soldiers. Comparing inner cities to combat zones, the report noted that while professional combatants get to leave a war zone once their tour of duty is over, inner-city children do not.

Teaching yoga, according to Koneazny, gives the kids a valuable lifelong skill that enables them to relax and find an inner place of calm, even in the midst of chaos. It helps children to focus in school, and it improves behavior and interpersonal relationships with other kids and adults. 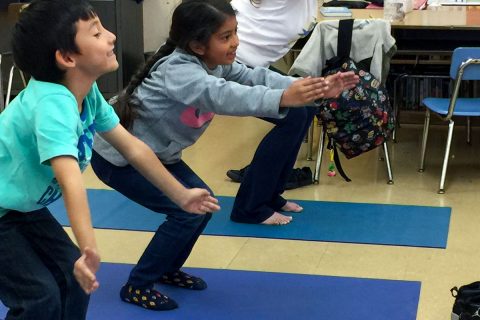 “Kids today are subject to so much more stress in their lives than I remember. They face demands and pressure from family, school and friends, not to mention concerns they hold about things happening in their neighborhoods and our world. It is important for them to learn how to just breathe, and feel OK in their own skins,” Koneazny said. “Yoga helps them accept who they are with no judgment and feel confident that everything will be OK.”

Koneazny, who has been practicing yoga for 20 years, has been teaching Little Yoginis for five years to first- through third-graders enrolled in JEP’s USC ReadersPLUS program, which provides after-school enrichment in addition to individualized academic assistance during the regular school day.

Koneazny begins each class by reading the students a story that introduces a particular theme centered on a yoga principle, such as kindness, nonviolence, acceptance or keeping a loving, open heart. She then teaches them yoga poses relating to that theme while also reminding students to be brave, kind, thoughtful and considerate.

Koneazny hopes the elementary school students will internalize the benefits of their yoga practice, taking it with them as they continue through school and into adulthood.

Power, who earned a bachelor’s in history from the USC Dornsife College of Letters, Arts and Sciences in 1984, is a former lawyer turned yoga teacher, the author of The ABCs of Yoga for Kids series of books and founder of the nonprofit World Yoga Power, which aims to bring the benefits of yoga to inner-city children. She said she helped Koneazny’s class celebrate International Kids’ Yoga Day, the primary event of her nonprofit, by attending Little Yoginis and teaching the students a five-minute yoga routine that tens of thousands of children around the world also practiced on that day.

“With the tree pose that we did today — to be able to stand on one leg and balance and focus — I always tell kids, it’s not just about the pose, it’s about taking that focus and concentration out into the world,” Power said. “If kids master some of these poses, they feel they are masters of their own universe, and then they can go out and do productive things in the world.”

Power also emphasized the positive role yoga can play in reducing childhood obesity as well as helping to prevent diabetes and stress.

Third-grade student Sonia Flores, 9, said yoga helps her to calm down if she has a bad day at school. Pretzel Pose is her favorite yoga position, she said, because it helps with the back pain from which she sometimes suffers.

“I do yoga at home because I found out it’s really good to deal with my back and my stress, and it helps me concentrate better at school, too. I’m teaching my mom yoga,” she said with a smile. “She loves Pretzel Pose, too.”

You glow, girls (and boys), at after-dark yoga class

Yoga for young ones

During recess, Sally pushed you. Your teacher gave you a frowny face on the spelling test, and you must write “incredible” 100 times on the blackboard.

A new video highlights research by USC’s George Salem on the physical demands of yoga practice by healthy seniors.

For participants in the free, USC-sponsored weekly sessions, payoffs include a positive outlook and some impressive weight loss.