A common sight caught the eye of USC senior Ryan Lopez one recent spring day as he left the chemistry lab of the USC Loker Hydrocarbon Research Institute.

It was an ordinary trash can. Other people crossing campus didn’t give it a second glance. But to Lopez, it was a symbol of how far he had come.

“I was collecting cans and bottles out of that trash can when I was 7 years old to help support my family,” he said. “To now have the privilege to be doing exciting research and about to graduate is such an overwhelming and humbling experience that I wouldn’t trade it for the world.”

Lopez earns his bachelor’s degree in chemistry from the USC Dornsife College of Letters, Arts and Sciences this week. For the first-generation college student who grew up in South Los Angeles, it’s the culmination of many years of hard work and determination.

But even as the 22-year-old celebrates his graduation, he is already looking ahead. He plans to complete his PhD in chemistry and someday return to his childhood neighborhood, or one like it, to help children and teens find their calling.

“Ultimately, I see myself giving back to my community,” he said. “I can show these kids that, hey, someone who has your background and went through your struggles was able to overcome that to get a doctorate.”

An aspirational presence throughout childhood

Lopez likes to joke that he might have traveled the shortest distance to become a Trojan. His family lives only three blocks south of the University Park Campus, and he attended Weemes Elementary School, a stroll across Vermont Avenue from USC.

“South L.A. in the ’90s was a lot different than it is now,” he said. “It was definitely a little rougher than it is today.”

On his walk to school, he would pass gang members and graffiti. But he also passed a collection of brick buildings that often drew his attention. When someone told him it was a university, he was intrigued by the idea of being able to study whatever interested him.

USC quickly became a mainstay in his day-to-day existence. He recalls students from the Herman Ostrow School of Dentistry of USC visiting his elementary school to provide free oral health screenings and dental hygiene tips. When he entered high school, Lopez would cut through the USC campus and hear the USC Trojan Marching Band practicing on Cromwell Field.

“USC has always had a special place in my life,” he said. “This is the place that put college on the map for me.” 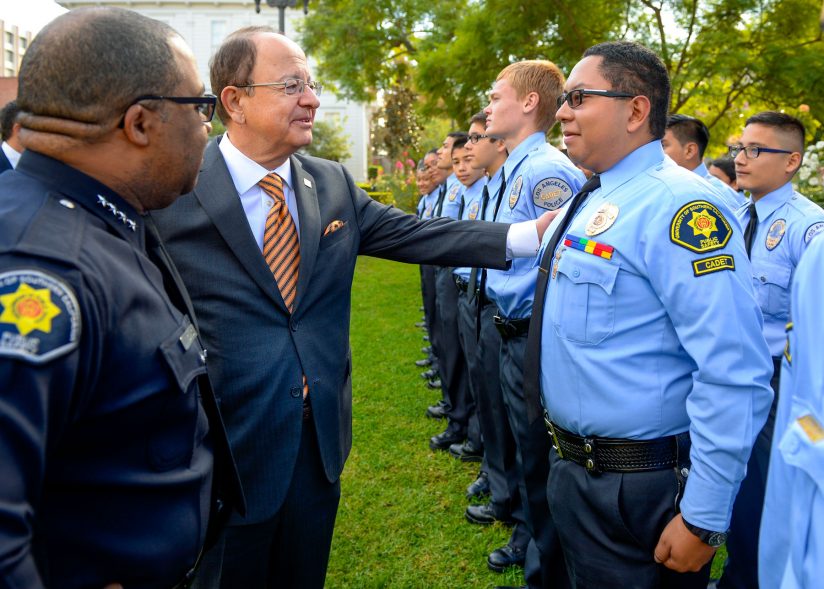 Ryan Lopez rose to the rank of cadet lieutenant in the USC Department of Public Safety Cadet Program and was the first one in the program to attend USC. (USC Photo/Gus Ruelas)

One of his most influential experiences came in the USC Department of Public Safety Cadet Program. He signed up as a teen and went on patrol with public safety officers, flew in a Los Angeles Police Department helicopter and assisted with security and first aid during the 2015 Special Olympics World Summer Games. He also received help with his schoolwork from USC students who volunteered as tutors.

Lopez eventually rose to the rank of cadet lieutenant, overseeing the program’s 50 participants. When he became the first graduate of the program to enroll at USC, he returned as a volunteer tutor. At least two other cadets are now pursuing their degrees at USC.

“I wanted to be a role model for these kids,” he said, “to show them that they can be successful.”

Lopez’s parents always stressed education. His mother had worked in a school in her home country of Mexico. His father was studying to be a lawyer in El Salvador when a brutal civil war in the 1980s forced him to flee as a refugee.

As a child, Lopez saw his father take on multiple jobs to sustain the family — parking attendant, car salesman and bus driver. His parents divorced when Lopez was a teenager, and his father has continued to work diligently to earn a living, driving buses for Montebello Bus Lines for nearly 17 years.

Lopez’s grandmother and aunt also sought refuge in the United States from the Salvadoran civil conflict. He said the challenges they faced are a big part of why he is so driven to succeed.

My family didn’t escape from their country, fleeing from war, for me to be a nobody.

“My family didn’t escape from their country, fleeing from war, for me to be a nobody,” he said. “They did what they had to do to survive. The best way for me to honor that sacrifice is to be someone they can be proud of.”

In many ways, he views those early struggles as a strength. He learned to be resilient and roll with the punches. Lopez sees those same traits among many of his peers who, like him, received a scholarship through the Norman Topping Student Aid Fund. The program supports students with high financial need, with special consideration of applicants from communities around USC who are the first in their family to attend college.

“They’ve crossed borders, overcome adverse household environments — they’ve defied all the odds,” Lopez said. “You learn how to deal with whatever life throws your way.”

As a boy, Lopez buried his head in books. He would visit the neighborhood library, grab a random title off the shelves and start flipping through the pages, absorbing as much as he could on any subject.

He had always been fascinated by how things work, and the nearby California Science Center quickly became his favorite museum. He devoured his high school chemistry book from cover to cover, then moved on to college science textbooks. By the time he enrolled at USC, Lopez knew he wanted to study chemistry.

He soon narrowed his focus to chemical nanoscience, which involves creating and testing materials that are incredibly tiny — roughly 100,000 times smaller than the width of a human hair. The field has countless applications, he said, such as creating nanoparticles called “quantum dots” that can bind to cancer cells and glow, helping doctors pinpoint tumors.

Lopez has worked on projects involving electrochemistry in the Narayan Laboratory at USC, exploring the use of transition metal oxides to generate oxygen and energy. He won a student award at the American Chemical Society’s annual meeting this spring after presenting his work on potential uses of oxygen created as a byproduct of certain electrochemical reactions.

Giving back to the next generation

He envisions one day working for NASA, designing chemistry experiments in space. Some people have encouraged him to run for political office, a possibility he isn’t ruling out. But he ultimately plans to teach high school chemistry in an underserved community.

“I would love the next generation of scientists to be a more accurate representation of our country,” he said. “I don’t just mean that along racial lines, but socioeconomic, gender and disability lines as well.”

Another long-term goal is more personal: to provide a better life for his family. Lopez said his grandmother, who is 72, still rides the bus several hours each day to get to her job as a housekeeper.

“It’s a dream of mine to buy my family a house — to say, abuelita, you don’t have to worry about the mortgage or the rent,” he said. “You can enjoy your golden years.”

As he reflected on the path that brought him to this moment, about to receive his degree at USC’s 135th commencement ceremony, Lopez described a tradition in the university’s Department of Chemistry.

“When I was little, could I ever have imagined everything I’ve gone through and how far I’ve come?” he said. “I’m very thankful for the journey and all the people who have brought me here, because it does take a village to raise a child. I hope the village that raised me is proud to see that kid who was collecting cans and bottles is now about to graduate in a cap and gown.”

Richard Brutchey, assistant professor of chemistry at the USC Dornsife College of Letters, Arts and Sciences, was lauded for his work as a researcher by ChemComm, a leading chemical sciences journal published by the Royal Society of Chemistry.