Nine outstanding USC supporters were honored for their professional achievements and legacy of service at the 85th annual USC Alumni Awards on Saturday at the InterContinental Los Angeles Downtown hotel. 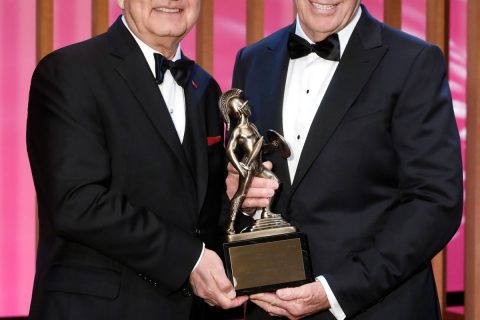 USC Trustee William McMorrow ’69, MBA ’70, chairman and CEO of the real estate investment company Kennedy Wilson, received the university’s highest alumni honor, the Asa V. Call Alumni Achievement Award, which recognizes alumni who have demonstrated exceptional commitment to the university and the community by giving generously of their time, energy and leadership.

“Bill McMorrow is an extraordinary leader and an exceptional trustee, as well as an excellent role model for our students,” said USC President C. L. Max Nikias. “Throughout his distinguished career in real estate, he has shown tremendous integrity and character, while bringing a visionary, global perspective to our board of trustees and to his work over the decades. He is a most deserving recipient of USC’s highest alumni honor.”

The Alumni Merit Award, which recognizes alumni whose remarkable accomplishments speak well for the range and quality of a USC education, was presented to USC Trustee Carmen Nava ’84, an AT&T executive who was named one of the Top 100 Most Influential and Notable Hispanics in tech in 2015 and 2016; former American Dental Association President Carol Gomez Summerhays DDS ’78, the first Filipina-American and fourth woman to head the oldest and largest dental association in the world; and Warner Bros. Chairman and CEO Kevin Tsujihara ’86, the first Asian-American to run a major Hollywood studio. 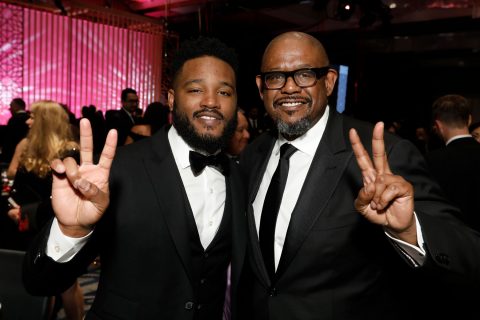 The Young Alumni Merit Award, which is presented to an alumnus age 35 or younger who meets the same criteria, was presented to the award-winning filmmaker Ryan Coogler MFA’11, whose credits include the critically acclaimed Sundance Film Festival Grand Jury Prize winner Fruitvale Station (2013), the box office smash Creed (2015) and the hit Marvel Studios film Black Panther, which opened in February.

“We are delighted to be recognizing such accomplished and revered alumni with Alumni Merit Awards at the 85th annual USC Alumni Awards,” said Associate Senior Vice President for Alumni Relations Patrick E. Auerbach. “To have the opportunity to honor a leading entertainment industry executive in Kevin Tsujihara, one of the top up-and-coming filmmakers in Ryan Coogler, a trailblazing telecommunications executive in Carmen Nava, and a national dentistry figure in Carol Gomez Summerhays, is a privilege for USC and the Trojan Family.”

The Alumni Service Award, which recognizes alumni for their outstanding volunteer efforts on behalf of the university, was presented to Bob Padgett ’68, a past president of the USC Alumni Association Board of Governors, and Valerie Gumbiner Weiss ’74, MPA ’81, a past chairman of the Alumnae Coordinating Council and longtime university volunteer.

“Bob Padgett and Valerie Weiss exemplify the finest in Trojan volunteerism,” said USC Alumni Association Board of Governors President Jaime Lee. “Each of them has devoted decades of their lives to serving USC, and it is a joy to be recognizing their hard work with the 2018 Alumni Service Awards as this year’s Alumni Awards celebration.”

Bruce and Madeline Ramer — steadfast ambassadors and dedicated supporters of USC who contribute their time, energy and expertise to a number of university boards and organizations — were named honorary alumni. Bruce Ramer, a member of the USC Board of Trustees since 2003, is a partner at Gang, Tyre, Ramer & Brown. He is also the chair of the USC Institute on Entertainment Law and Business and a member of the boards of councilors of the USC Annenberg School for Communication and Journalism, the USC Gould School of Law and the USC Shoah Foundation Institute for Visual History and Education. In addition, he serves on the board of governors for the Center for the Digital Future at USC Annenberg. Madeline Ramer has served on the USC School of Dramatic Arts Board of Councilors and the Los Angeles Philharmonic Board of Overseers. For 12 years, she was vice president of creative services/artists relations for CBS Entertainment. The co-president of the Smith Family Foundation, she also is a principal of Smith Properties, a family investment company engaged in real estate

The director, writers, editors and composer give students the inside story on the hit film.

William McMorrow is chairman and CEO of the real estate investment and services firm Kennedy Wilson.

For faculty resident, life at USC Village is a family affair

The arrangement has its perks, from a unique family opportunity to the chance to make deep connections with students.

When in-person therapy became too dangerous, every state adopted at least one policy related to treatment access for patients suffering from opioid addiction. But no state did everything that was necessary, the USC study found.