A playground with robots, the USC Robotics Open House fires up the creativity and imagination of K-12 students through cool demonstrations that prove science is an interactive and fulfilling discipline of study and research.

“Even though we do this every year, there is an insatiable demand for it,” said Katie Mills, who organized and managed the event as outreach manager for the Adopt-a-School Adopt-a-Teacher PreK-12 STEM program at the USC Viterbi School of Engineering. 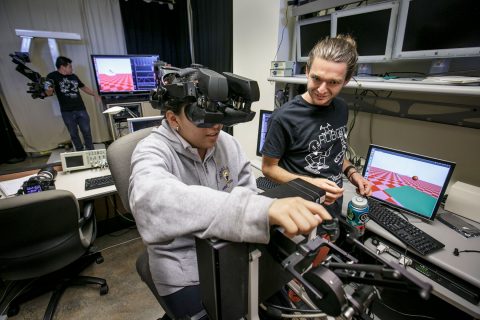 More than 1,700 students, educators and parents got a front-row seat to the technology coming out of USC Viterbi’s Robotics and Autonomous Systems Center — home to one of the most diverse collection of robots in the nation. With over 80 active research robots, the center’s projects span the areas of service, humanoid, distributed, reconfigurable, space and nano robotics. Students also interacted with the people responsible for building and working with the robots.

“The whole purpose of the Robotics Open House is to engage students and teachers in the engineering research process,” Mills said. “We want them to be in the labs and to understand that it is young people like them, of all genders and ethnicities, doing this research.”

A post-event survey gauged the impression left on the young students. Eighty-three percent said their visit made them want to study engineering. Eighty percent of girls in attendance, the majority of whom come from Hispanic backgrounds and are potential first-generation college students, said the event changed their understanding of engineering and piqued their interest in studying engineering subjects. 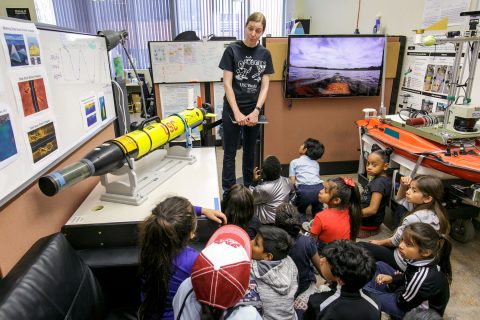 Robotics seems to have renewed interest in STEM courses like none other, Mills explained, because it brings science, technology, engineering and mathematics, often taught as four different subjects, together as one. Given that STEM occupations are growing at approximately twice the rate of non-STEM courses, according to the Office of Science and Technology Policy, renewed interest in these subjects is good news for a nation hoping to fill an inadequate pipeline of teachers and students who are proficient in these vital areas.

Mitul Luhar, assistant professor of aerospace and mechanical engineering, who studies turbulence and fluid mechanics, demonstrated the use of robots in the water channel of his lab. Luhar uses robots to measure what turbulence does to environments like coastal regions and even deeply buried underground pipes that crisscross our cities.

Next door was the drone lab of Assistant Professor of Computer Science Nora Ayanian. The holder of the Andrew and Erna Viterbi Early Career Chair creates end-to-end solutions for multirobot coordination to enable almost anyone to use teams of robots: from drones used in aerial photography to robot teams used to rescue people from burning buildings.

Monish Aron of the Keck School of Medicine of USC was also on hand to discuss his work doing robotics surgery on humans. His videos showing robots performing laparoscopic surgery on bladders and kidneys were a hit with students from medical pathway high schools.

USC students do their part to help

In all, 100 student and faculty volunteers participated in this year’s Robotics Open House. 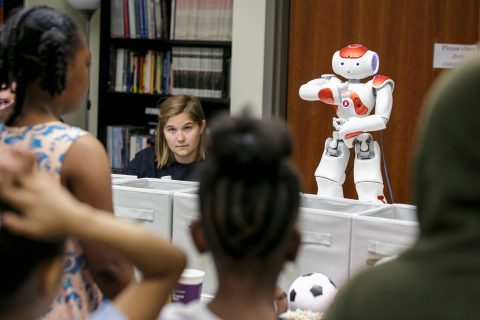 “We had tremendous help from USC students, especially members of student organizations like Spark SC, NSBE and Theta Tau,” Mills said.  “We couldn’t have done it without their help.”

Students were invited to participate in a panel that featured entertainers and innovators in tech like Jon Burton, one of the producers of The LEGO Movie and designer of hit LEGO video games like LEGO Star Wars and LEGO Batman.

While Burton showed the students where their careers could take them, panelist Kathy Kemper, CEO and director of the Institute for Education, offered a starting point.

“Three years ago, I decided to help USC Viterbi start a computer science coding camp,” said Kemper, who together with Mills aims to expand the camp’s targeted demographic to boys and girls from all backgrounds, either economically or ethnically, to give them a greater understanding of computer science.

The SC Coding Camp, CS@SC, will be held again in July. In addition to the many camps offered throughout the summer, like the SHINE program, there are also student-led initiatives like Hack Sc Jr., a hackathon especially designed for elementary and middle school students from the Los Angeles area.

Invasion of workplace automation: What happens when a robot has an eye on your job

USC experts in manufacturing, technology, labor, education and business discuss the continued growing pains for work and society in the age of automation.