USC hosted its second summit on ending homelessness and housing insecurity in Los Angeles, evaluating the progress that has been made and the challenges that still lie ahead one year after the first gathering to launch a sustained effort.

More than 500 attendees filled Town and Gown on April 20, listening to over a dozen speakers and panelists representing city and county government and nonprofit organizations as well as USC faculty from a broad range of disciplines who are engaged in addressing what Los Angeles Mayor Eric Garcetti described in his remarks as “the greatest moral and humanitarian crisis of our time.” 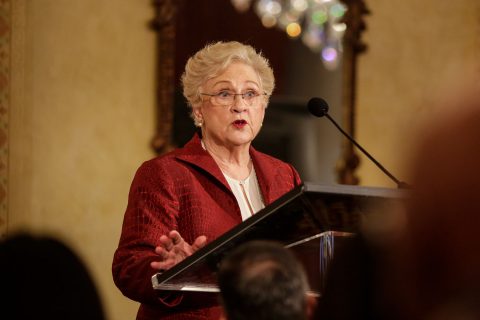 Marilyn Flynn, dean of the USC Suzanne Dvorak-Peck School of Social Work and chair of the Deans’ Steering Committee on Eliminating Homelessness, emphasized that the effort to end homelessness must be collaborative. The theme of collaboration ran throughout the day’s event: USC researchers working with cities on ways to improve their response to homeless individuals; projects combining the expertise of academics with the lived knowledge of people experiencing homelessness; and, perhaps most important, the growing partnership between the city and county of Los Angeles — a cooperative relationship that would have been hard to imagine just a few years ago.

The summit, co-sponsored by the USC Office of Research and the USC Initiative to Eliminate Homelessness, highlighted significant achievements over the past year. Chief among these successes was the overwhelming passage of Measure H in the county and Proposition HHH in the city. Together these two measures provide an enormous injection of funds to prevent and combat homelessness and to build permanent supportive housing — which, said L.A. County Supervisor Mark Ridley-Thomas, will allow Los Angeles “to scale up our compassionate and innovative strategies.”

The experts presented positive data: In the last half of 2017, 7,200 people moved off the streets and into interim housing; 3,350 acquired stable housing; and 4,000 homeless disabled adults were helped onto the path to federal disability benefits. Phil Ansell, director of the Los Angeles County Homeless Initiative, said that in the first five years of Measure H, 45,000 families and adults will secure permanent housing and 30,000 additional families and adults will be prevented from becoming homeless.

Yet, Ansell explained,“it’s possible that the number of homeless people in Los Angeles County will be higher five years from now than it is today if we are not able to slow the inflow of people into homelessness.” This inflow, many speakers noted, is currently far exceeding the region’s ability to deliver services and provide supportive housing, so that the number of people living on the streets and in shelters has actually risen 23 percent across Los Angeles County this year. 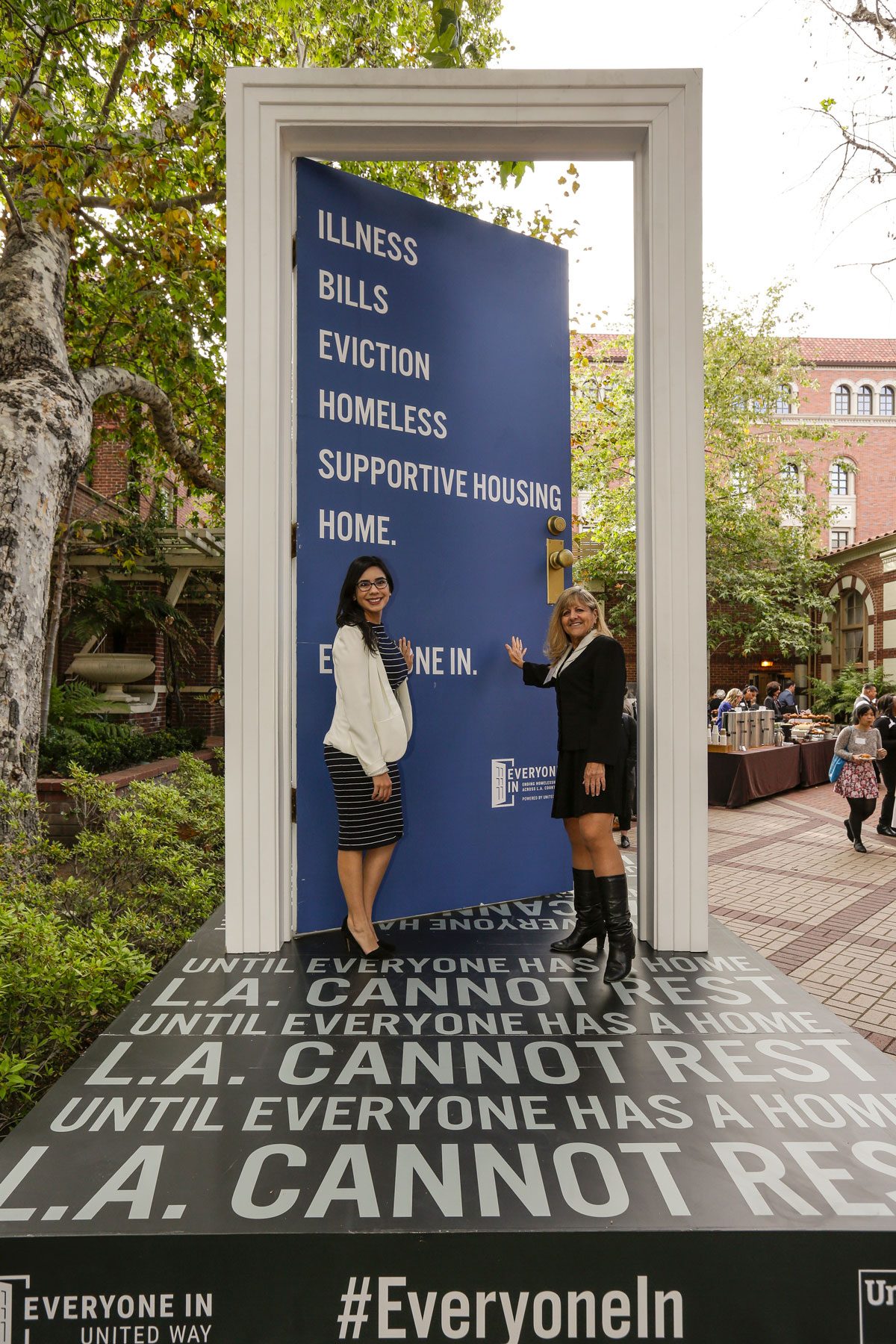 According to most estimates, the total number of homeless people in the county is now approximately 57,000, a figure that represents 10 percent of the homeless population of the United States. Ansell cautioned that without a significant increase in the supply of permanent supportive housing, affordable housing and market-rate housing, the elimination of homelessness will remain out of reach.

Attorney Greg Spiegel, director of strategic initiatives at the Inner City Law Center, discussed the need for strategies that prevent people who are living on the margins from becoming homeless in the first place. He pointed out that there are more than 500,000 households in Los Angeles that earn less than $40,000 a year and spend more than half of their income on rent, but the city remains 570,000 units short of housing for people in that income category.

The predominant mood of the presenters, however, was one of optimism, largely buoyed by the sense that the majority of Angelenos now recognize homelessness as the most important issue facing the region and are committed to eliminating it. Elise Buik, CEO of United Way of Greater Los Angeles, discussed the “Everyone In” campaigndesigned to create energy and momentum around the issue, to dispel remaining stereotypes about homelessness and to change the narrative: “People need to know that we know how to end homelessness,” she said.

Despite decades of policy and economic decisions on all levels that have led to the current crisis, speakers emphasized that while innovation remains essential, there are already strategies that have proven successful. Among these are bringing services topeople instead of placing the burden on individuals experiencing homelessness to seek out help; coordinating those services using multidisciplinary teams; reducing inflow by identifying people at risk; reducing rates of incarceration, particularly of individuals with mental illness; and, crucially, creating more housing.

Resources for research and development

USC has taken on a leadership role in implementing strategies to eliminate homelessness. The university offers resources for research and development; incentives for students to become involved in the challenge of ending homelessness; partnerships with the city, county, nongovernmental organizations and philanthropies; a wealth of Trojan volunteers; a pipeline of engaged, prepared professionals in all disciplines; and programs that provide direct services to those in need.

Faculty across the university have responded to the call to action. Gary Painter, director of the Center for Social Innovation at the USC Price School of Public Policy, announced the launch of the Homeless Policy Research Institute, which, in partnership with United Way and with support from the Conrad N. Hilton Foundation, will bring together 30 policymakers and researchers to design timely, relevant and actionable research to end homelessness in Los Angeles County.

Eric Rice, associate professor at the USC Suzanne Dworak-Peck School of Social Work, and Milind Tambe, the Helen N. and Emmett H. Jones Professor in Engineering at the USC Viterbi School of Engineering, who are also the co-founders of the USC Center for Artificial Intelligence in Society, described their joint project designed to prevent the spread of HIV among homeless youth.

Six thousand of the region’s homeless individuals are people age 13 to 24 living on their own, 7 percent of whom are infected with HIV. Because these young people form networks to support each other, the USC Center for Artificial Intelligence — a collaboration between the schools of social work and engineering — was able to develop an algorithm that successfully identified peer leaders who could influence other youth to be tested for the virus.

USC faculty representing nearly a dozen disciplines, from social work to dentistry, from business to public policy, shared their insights at the summit. They covered topics including using social enterprise to create transitional jobs, eliminating technological challenges that prevent innovative solutions from scaling up, diverting people with mental health or substance abuse disorders away from the criminal justice system and implementing a new health care delivery system — “street medicine teams” — to serve people experiencing homelessness where they live.

The overall ethos of the day was summed up by Ansell: “This is not an organization,” he said. “This is not a program, this is not a bureaucracy. This is a movement — characterized by innovation, by passion, by collaboration, by boundarylessness, by egolessness, by commitment and by inspiration.”

Through Homelessness Awareness Week, students, faculty and staff can grasp the social, psychological and environmental factors at play.

Veteran writer uses book on L.A., homelessness and even the Gettysburg Address to inspire questions and pique curiosity.