USC senior Jeremy Fricke wasn’t sure what to do after finishing high school in a town of 5,000.

“It’s a two-stoplight town in Minnesota, and I wanted to get out and figure out my future, so I joined the Marine Corps,” he said.

Fricke served eight years as a chemical, biological, radiological and nuclear defense specialist, teaching Marines how to prepare and respond to events of mass destruction, such as nuclear or chemical warfare attacks.

The experience piqued his interest in the biological impact such agents can have on the human body and, ultimately, his desire to study medicine. He was at community college when the Marine Corps’ Leadership Scholar program offered to send his transcripts and test scores to universities for him.

“I tried USC on a whim, but I thought it was a long shot,” he said. “When I heard back that I was qualified, it was amazing. I immediately put all my eggs in that basket, did a campus tour and fell in love and applied that day.”

The camaraderie of the student veteran community at USC was evident to Fricke even before classes began.

“The USC Veterans Association presented at orientation, and afterward a group of about 10 of us went across the street to The Lab, and we really clicked,” he said. “They were the people I leaned on for support during my first year because I was new to the area.”

He found that the network extended across campus to include staff, numerous student groups including the coed veteran fraternity Omega Delta Sigma and an administration that actively supports veterans.

“We have a great support network here,” he said, “so it’s an environment that’s really welcoming.”

Fricke also saw ways to enhance benefits for student veterans at USC, efforts he undertook as president of the USC Veterans Association during his sophomore year.

The biology major and health care studies minor worked with the association’s adviser, retired Gen. David Petraeus, to expand tuition coverage through the Yellow Ribbon Scholarship and give student veterans priority registration. Petraeus connected Fricke to senior USC administrators, such as Vice Provost for Academic Operations Mark Todd, who helped him turn the proposals into policy.

Tying a bow on the Yellow Ribbon program

Today, any veteran who is admitted to USC and eligible for the GI Bill is guaranteed full tuition coverage through the Yellow Ribbon program. Additionally, USC veterans can now register for courses before students with the highest number of earned credits.

Fricke is also recognized for increasing outreach and recruitment of veterans to USC during his tenure by initiating a program to encourage community college vets to transfer to the university.

I wanted veterans to know their Yellow Ribbon coverage is unlimited here, and that USC is affordable to them.

“Since community colleges are set up for transferring to UCs or Cal States, these veterans weren’t getting the information they needed about USC,” he said. “I wanted veterans to know their Yellow Ribbon coverage is unlimited here, and that USC is affordable to them and it’s an amazing place for veterans.”

Brandon Wexler, a veteran Master at Arms, was studying at Harbor College when he went to one of the first veteran transfer lunches.

“USC is the only school I ever wanted to go to, and at the lunch I learned that USC is a really military-friendly school,” he said. “We met so many people who support us — from financial aid to the veterans resource center, and those relationships helped a lot.” 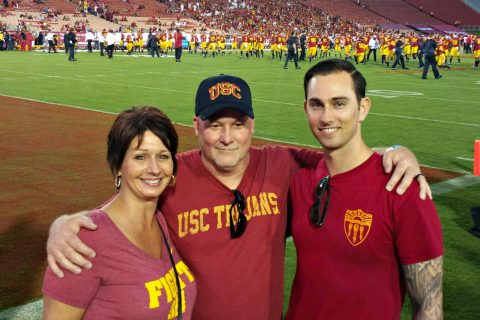 Now a junior at USC majoring in cognitive science and linguistics, Wexler added, “My experience has always been that whenever I reach out to administration or to faculty here, people go out of their way to help and actively get the ball rolling.”

USC currently has 192 undergraduates and 851 graduate students who are veterans or active duty.

“Jeremy brought exceptional leadership skills to his role as president of the Student Veterans Association — leadership skills that were forged in his service for our country,” said Todd, who oversees university programs for veterans. “He is a role model for prior enlisted veterans who I know share his continuing commitment to serving others as a civilian. Jeremy was instrumental in creating access to USC for other veterans and for making the transition to USC easier.”

Fricke said his favorite USC moment was letting his parents see Trojan support for veterans for themselves. They flew out from Minnesota to attend the first USC home game of the 2016 football season, for which Fricke was honored as student veteran of the game. But he kept that a surprise.

“Before kickoff, during the national anthem, they announced my name and put my photo on the Jumbotron,” he said. “My parents and I were brought onto the field, and they just burst into tears with pride.

“It was definitely a highlight to show them how great USC was to me and the veteran community,” added Fricke, who has his sights set on medical school after graduation. “They really felt part of the Trojan Family then.”

Stayce Harris ’81, the first female African-American to achieve the rank of lieutenant general in the U.S. Air Force, inspires female pilots and engineers to dream big.