Distinguished Emeritus Professor of Religion John Wesley Robb, an alumnus who taught at the USC Dornsife College of Letters, Arts and Sciences for 33 years, died of natural causes on Feb. 22 in Seattle. He was 98.

In 1968, at the height of the Vietnam War, USC undergraduate student Donald Miller was debating whether to apply for conscientious objector status rather than be drafted into the army. He mentioned his dilemma to Robb, an instructor at the time.

“Wes Robb suggested that perhaps I should consider applying to a newly created PhD program in social ethics while I weighed my options,” recalled Miller, now the Leonard K. Firestone Professor of Religion and former chair of religion at USC Dornsife. “To make my decision easy, he said I could be his teaching assistant in his popular course, ‘Human Values,’ which would pay my tuition and offer a small stipend.”

Miller said that over the years, he witnessed Robb’s charisma as a teacher and the impact he had on students. Robb was often referred to as “J. Wesley God,” Miller said, since he was regarded as the prophet who led them to struggle with issues of human purpose and meaning.

This is Wes Robb’s legacy, challenging students to … discover values that are deep rooted and live a life of purpose.

“This is Wes Robb’s legacy,” Miller said, “challenging students to … discover values that are deep rooted and live a life of purpose.”

For more than three decades at USC Dornsife, Robb was an admired teacher and mentor, twice receiving the USC Associates Award for Excellence in Teaching. More than 9,000 students took one of his seminars or his highly popular “Human Values in a Modern Society” course, which many dubbed “Wes Robb Teaches the Truth.”

While Robb served as associate dean at USC Dornsife and was active with the Faculty Senate, teaching and mentoring students was his first love, according to his daughter Lydia Robb, a USC alumna.

“My father’s ‘Human Values’ course had a life-changing effect on many of his students,” she said. “He was challenging students’ thinking about what it means to be human in the world.”

In the late 1950s, Robb sponsored Martin Luther King Jr. to speak at USC, despite some concerns that King’s appearance might spark unrest, his daughter said. The event was peaceful and later, when King was well known and had gained the respect of the academic community, the university administration invited him to speak and offered him an honorarium.

“My father was proud to have been a trailblazer,” Lydia Robb said.

Alumnus and USC Dornsife Board of Councilors member Jerry Papazian described Robb as one of the “treasures” of USC, especially during the 1950s, ’60s and ’70s.

“During the ‘Days of Concern,’ USC’s sophisticated title for the student reaction days to Kent State and Vietnam, he was one of the few deeply involved group of faculty members who worked endlessly with dissenting students to structure in positive outcome ways an answer to their critical concern,” he said. “At the same time, he was one of the faculty valiantly taking his turn manning the flagpole in front of Bovard, protecting the freedom and rights represented in our flying flag, like the strong Navy chaplain he was.”

Robb was born on Dec. 1, 1919, in Los Angeles to Edgar Robb, a minister in the Free Methodist Church, and Alta Boger Robb, a former classics professor. 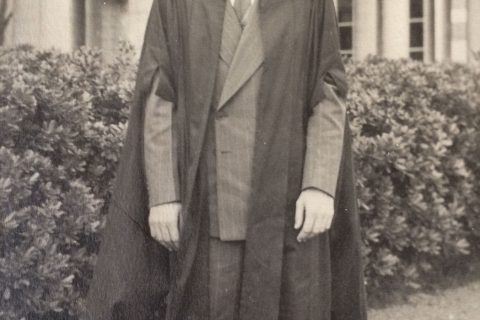 John Wesley Robb graduated from USC Dornsife in 1945 with a master’s degree in theology. (Photo/Courtesy of Judith Robb Eggerman)

Robb attended Los Angeles Pacific College, where he met Ethel Edna Tosh. The couple married in 1942, spending 64 years together until her death in 2006.

He earned two degrees from USC Dornsife: a master’s of theology in 1945 and a PhD in philosophy in 1952. Between earning the two degrees, he served as a chaplain in the United States Navy and taught at Dickinson College in Pennsylvania. After obtaining his doctorate, Robb served a second tour of duty as U.S. Navy chaplain before joining USC Dornsife’s Department of Religion in 1954. He taught there until his retirement in 1987.

Many of his former students got together to fund an endowed scholarship in Robb’s name that year. The J. Wesley Robb Endowed Scholarship is awarded to USC Dornsife juniors who demonstrate significant moral leadership in the campus community, a commitment to human values and a deep concern for others.

Lydia Robb said her father was a very strong supporter of academic freedom and the First Amendment. Recounting how he stood up for his own values in bringing King to speak at USC decades before, she said, “He was a really good man and he lived a good life.”

Robb is survived by daughters Lydia Robb and Judith Eggerman; grandchildren Todd and Amy Elliott and Julia Eggerman; great-grandchildren Alex, Caroline and Thomas Drenth; and many nephews, nieces and cousins.

A memorial service will be held April 28 at 2 p.m. at University Temple United Methodist Church, 1415 N.E. 43rd Street in Seattle.

Are baby boomers returning to religion?

Many are increasingly turning to houses of worship to find meaning as they age.

USC writing professor Ellen Wayland-Smith looks at her own family tree and finds a relative who believed he was God’s prophet and led a 19th-century sect.

Most Americans say media coverage of religion too sensationalized

Two-thirds of the American public says religion coverage is too sensationalized in the news media – a view held by less than 30 percent of reporters, according to the results of a survey released today.