What does it take to compete at the highest level? And what does it take to do it in multiple competitive arenas? Kobe Bryant, a five-time NBA champion-turned-venture capitalist and Academy Award winner has a few thoughts about that.

Bryant spoke to a capacity crowd at USC’s Bovard Auditorium on April 2 in an informal and wide-ranging discussion covering his earliest childhood dreams of playing basketball, his competitive nature and the challenges of pivoting toward his second act after retirement. He was hosted by USC’s Performance Science Institute, a multidisciplinary center housed at the USC Marshall School of Business, that studies the science behind high performance.

The 90-minute talk opened with a celebration of Bryant’s basketball bravado, but later turned into a dialogue on the challenges of re-channeling athletic competitive drive into a business arena and, finally, into a discussion of Bryant’s longtime love of storytelling.

Since retiring in 2016, Bryant has launched Granity Studios, a media and animation studio; granity is a word Bryant coined by blending the phrase “greater than infinity.” The studios’ first production, the short animated film Dear Basketball written by Bryant, won an Oscar for best animated film this year.

Kobe Bryant at USC: I ‘buried’ some players 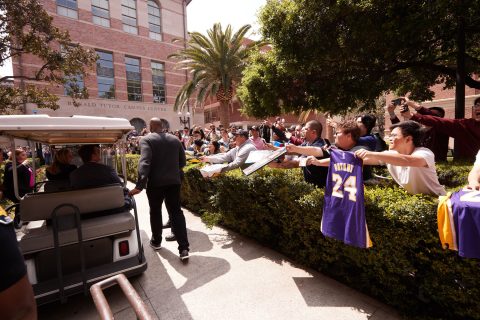 Fans line up for a chance to meet five-time NBA champion Bryant, who spoke to students at Bovard Auditorium. (Photo/William Vasta)

David Belasco, Performance Science Institute co-founder and executive director of the Lloyd Greif Center for Entrepreneurial Studies, asked Bryant about grit, passion and what it’s like to work harder than everyone else, leading to a special appearance by Belasco’s fellow institute co-founder, Pete Carroll.

In a videotaped question, the head coach of the Seattle Seahawks and former USC head football coach asked Bryant about his hard work and teammates who may not have shared his approach. He was blunt when asked what it was like to play with people who weren’t as “gritty” as he is:

“It may sound tough, but I killed them. I buried them,” he said. “My tolerance for that is not to be tolerated. I beat them to the point where they might want to reconsider their professional career.”

His tone later softened as Belasco pushed him to discuss topics such as leadership with the Lakers, a team he refused to part with even during the final years of his career when the team had no chance of winning another title.

“As a leader of the team, your job is to elevate the other guy, to get them to emotionally want to be better,” Bryant said. “During practice, it was important to know each one personally, to know what button to push to get them to practice harder.”

“When you have a star player who is the first to arrive and the last to leave the gym, it sets the bar for everyone else,” she said. “I don’t think Kobe gets the credit he deserves because he makes it look effortless. But that’s what made the Lakers great.”

Buss’s reflection on Laker greatness served as a segue from Bryant’s 20-year NBA career, in which he won five championships with the Lakers, to his next chapter. Since leaving the game, he has parlayed his leadership abilities into a new financial business, as well as his interest in entertainment.

In 2013, he established Bryant Stibel, a $100 million venture capital fund along with brain scientist and tech entrepreneur Jeff Stibel. 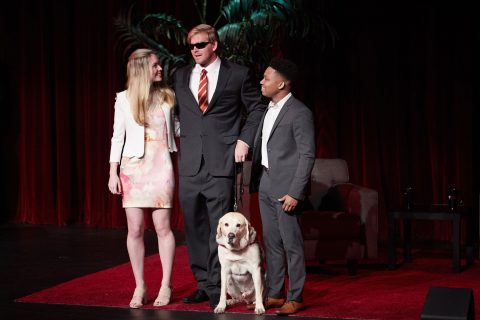 The event began with the awarding of the first Jake Olson Vision Awards, scholarships given to students who have overcome adversity to arrive at USC.

They are named for — and were presented by — Jake Olson, a USC Marshall student leader and long snapper for the Trojan football team. Olson lost his eyesight age at 12, but that did not stop his dream of attending USC and playing football for the Trojans. Cailin Stroyke and Isiah Dixon accepted their Vision Awards onstage alongside Olson.

Would you bank with Amazon or Google? More than half of us say ‘yes’

USC study finds technology tops location as customer priorities shift — and many of us are fine banking with a company that has no banking experience.

Competition among secondary-school kids helps mark the opening of USC’s London office, the university’s ninth international office and its first in Europe.

And the nominations for Student Academy Awards go to …

The awards support excellence in filmmaking at the college level.

Alumna can’t talk specifics about the film industry’s biggest night — but she does recall the events that weren’t planned (think group selfie).