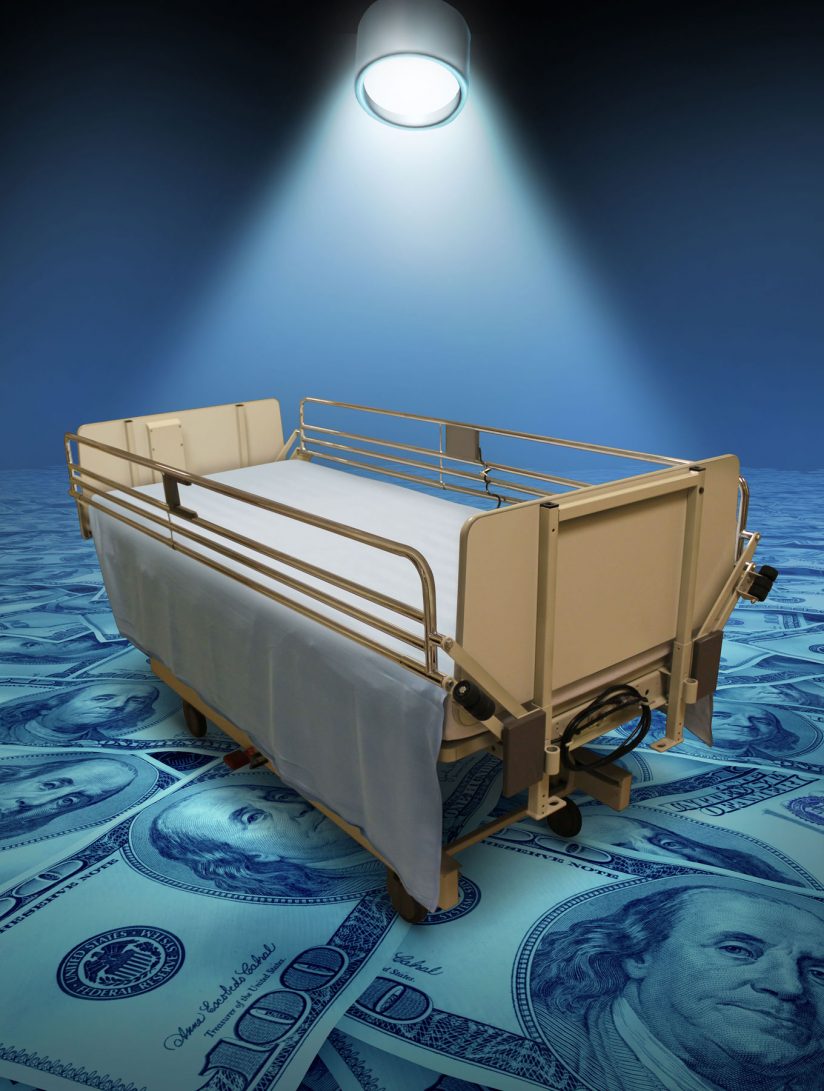 High-deductible plans increase the risk of financial hardship for certain Americans, in particular those who are low income and those who have a chronic condition, USC Schaeffer Center researchers found. (Illustration/Alamy)

High-deductible health plans are touted for their money-saving potential, but a new USC study finds that they can greatly increase the risk of high out-of-pocket health care costs for Americans who are low income or chronically ill — and may topple them into financial disaster.

“These plans do have lower premiums and might seem affordable, but if you are low income or chronically ill, they might end up hurting you because you face a significantly higher risk of catastrophic out-of-pocket costs ,” said Neeraj Sood, the study’s corresponding author and an expert on high-deductible plans at the USC Schaeffer Center for Health Policy and Economics. “People often don’t understand health insurance and thus might not know that enrolling in high deductible plans exposes them to significant financial risks.”

Earlier research has defined excessive financial burden for a consumer as spending more than 3 percent of his or her income on health issues.

With that in mind, researchers at the USC Schaeffer Center calculated the increased risk of excessive financial burden for certain groups of consumers after they switched from traditional coverage to high-deductible plans. The likelihood of financial trouble was higher for all enrollees on the high-deductible plans, but especially those who were low income or have a chronic condition.

In fact, more than half of the low-income enrollees and over one-third of those with chronic conditions faced excessive financial burden after enrolling in a consumer-directed health plan.

The study showed that enrollment in a high-deductible health plan also raised the probability of high out-of-pocket spending on health care. The percentage of those likely to spend more than $2,000 on care, for example, increased by nearly 10 percentage points among the full sample and the lower-income subgroup. The percentage of chronically ill patients paying that much on care grew by 15 percentage points.

“If you are low income or have a chronic condition, or both, and your employer switches to high-deductible insurance, then you are significantly increasing your chance of facing an excessive financial burden or even financial disaster,” said Sood, a professor at the USC Price School of Public Policy.

The study, published today in The American Journal of Managed Care, was based on a 25 percent random sample of claims data from OptumInsight Clinformatics Data Mart, a subsidiary of UnitedHealth Group.

The study covered claims filed in a full three-year period from 2011 through 2013 for commercially insured subscribers and their dependents. For comparison, the study focused on a control group that included 653,155 consumers on traditional plans and 36,387 consumers on high-deductible plans. Their ages ranged from 18 to 64.

Do consumers have skin in the game?

“If this trend continues, it is imperative that we better inform individuals of the significant out-of-pocket burden they may face when they actually seek care,” Sood said.

Advocates of the plans say high deductibles give consumers more skin in the game to become judicious price shoppers for health care services and stash money in their health savings accounts (HSA) for basic care and emergencies.

Critics argue that the high-deductible plans shift too much responsibility to consumers and deter them from seeking even basic care, so that they end up seeing a doctor in an emergency with a more expensive health problem.

Research has shown that consumers frequently choose worse plans despite being offered options that have lower premiums and a lower financial risk of out-of-pocket spending.

The study is the latest in a series by the USC Schaeffer Center to examine how high-deductible plans affect consumers and health care.

“These plans do save money, but they don’t seem to be saving money in smart ways,” Sood said. “Our research has shown that consumers on these plans do not increase their use of preventive care, which would reduce overall costs. We don’t see an increase in price shopping for care. We also don’t see a reduction in use of unnecessary medical services.”

“Consumer-directed health plans are an attractive option for some consumers, particularly higher-income households that benefit from tax-preferred savings accounts and can afford to pay high out-of-pocket costs if needed,” said Trish, who is also a research assistant professor at USC Price. “But our study shows that they can have negative consequences for more vulnerable populations.”

The lead author on the study was Xinke Zhang, formerly of the USC School of Pharmacy.

How health authorities fight the spread of infectious diseases

High-deductible plans are falling short of their promises of significant savings for consumers, study finds.

If implemented, the administration’s policies could threaten lives and diminish progress made around the world.

Researchers find that having ‘skin in the game’ is not enough of an incentive to shop for less expensive care.