Turns out Mom was right: Spending more time studying, and less time partying, will lead to greater academic success. But according to a new study by USC computer scientists, hitting the books and avoiding all-nighters will also make you happier. 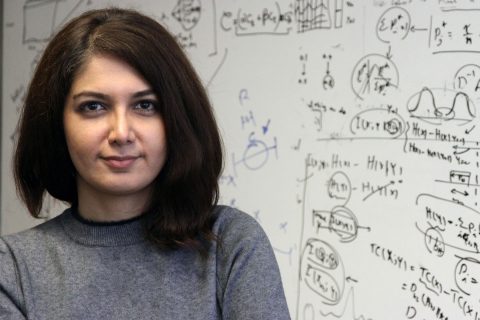 While it may come as no surprise that students who spent more time at the library and practiced healthy sleep habits performed better academically, the researchers found these students also reported greater overall life satisfaction.

“This could imply that happiness and wellness are correlated with performance and engagement,” said lead author Homa Hosseinmardi, an ISI postdoctoral research associate who specializes in computational social science and mathematical modeling.

This proof-of-concept study was conducted using publicly available data obtained from the StudentLife app, which monitored readings from smartphone sensors carried by 48 Dartmouth student volunteers during a 10-week term in 2013.

It reveals the feasibility of finding concealed behavioral patterns in groups of similar individuals from data collected entirely from passive and mobile sensors.

While psychologists in the past have made effective use of surveys and experiments in clinical settings, these techniques can be time-consuming and intrusive. By contrast, sensors offer “passive” experience sampling, allowing participants to go about their daily lives during the data-collection process.

The study’s findings, presented at the HeteroNAM ’18 data analysis workshop, will be incorporated into a $12 million multidisciplinary USC project called TILES: Tracking Individual Performance with Sensors. The project aims to use sensor data to better understand workplace stress and productivity.

Benefits of sleep for college students

Advances in wearable sensor technology, along with data acquisition and analysis procedures, have given researchers and consumers new insights into the human mind and personal health.

The ubiquitous smartphones in our pockets can now sense light, sound, motion and location and even detect sleeping patterns. From this continuous stream of data, computational models can make high-level inferences about how much a person is socializing, studying or sleeping.

“There are many things we hope to learn about people from data,” said co-author Kristina Lerman, a research associate professor of computer science and an expert in behavioral data mining and machine learning.

We can explore people’s everyday behavior to try to predict certain aspects of their psychological state.

“For example, we can explore people’s everyday behavior to try to predict certain aspects of their psychological state, such as whether they are feeling stressed and anxious, to better understand what types of experiences trigger these emotions.”

In this study, the researchers used computational models to divide the student volunteers into two groups based on their behavioral patterns. Using a mathematical method called non-negative tensor factorization, the team was able to identify clusters of individuals who exhibited higher academic performance, as well as those who frequently engage in leisure activities.

“The idea was to group people that exhibit similar behaviors to determine if these behaviors correlate with a particular outcome,” Hosseinmardi said.

By contrast, students with poorer grades engaged in more conversations between midnight and 6 a.m. and spent more time in darkness during the morning hours, which could point to a pattern of sleeping in after a late night.

The researchers confirmed their findings using “ground truth” data — information collected from participants during the original study — such as surveys, behavioral tests and GPA scores.

They were surprised to discover the group that studied more, and had better grades, also reported significantly higher positive affect scores, a psychological assessment that measures mood and well-being. This group also contributed more frequently to an online class forum.

“It was interesting to discover that the students who worked harder, and were more engaged with their studies, were actually happier as well,” Hosseinmardi said.

“Through our research, I hope we can learn that happiness and satisfaction will actually bring more productivity by creating a positive feedback loop.”

The building is home to an infusion center, a women’s care center, the Transplant Institute and the Outpatient Surgery Center