An unprecedented surge in applications has made 2018 a historic year for USC admissions. A record 64,000 students applied, a 14 percent increase from the year before and the biggest jump in two decades. 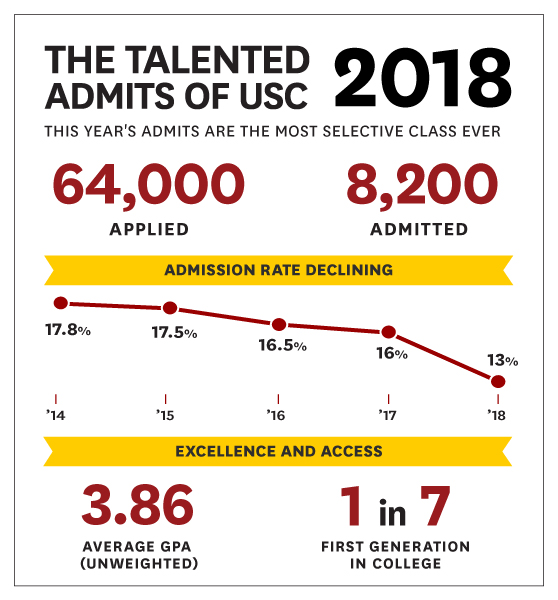 “We’ve never had a harder time selecting which applicants to put in the classroom,” said Timothy Brunold, USC’s dean of admission. “We could hardly believe the numbers, and now we’re feeling the pain of having to turn away so many candidates we admire. At the same time, it’s a breakthrough year for USC.”

Academic achievement increased as the average GPA and standardized test scores continued climbing. The record number of applicants forced the USC Office of Admission to accept just 13 percent – the lowest ever for USC. The admission rate dropped a full 3 percentage points.

Of those admitted, 26 percent are from underrepresented minority groups, while 69 percent are students of color.

The immense increase in the number of high school students seeking admission to USC was the biggest since 1999 with the exception of 2012, when the introduction of the Common Application caused a spike in applications.

The boom in applications comes after a decade of expanded recruitment efforts. University admissions staff members visit about 2,200 high schools every year.

“We know the high school counselors, and they know us,” Brunold said. “As some of their best and well-known students head to USC, there’s increased awareness and excitement about us in those communities.”

More than a third of the admitted class are straight-A students, and 60 percent have standardized test scores in the 99th percentile.

“Grades and numbers are a starting point,” Brunold said. “We want a diverse class, and we think about which students our faculty want to teach, which students want to solve intractable problems. It’s a search-and-selection process that lines up with the university’s strategic plan, and the mature young people we admit bring something to the student body.”

Brunold noted high interest in new degree programs at several schools, as well as the draw of student life enhancements like the massive USC Village, a living/learning environment for 2,500 students and a welcome addition to the neighborhood around the University Park Campus.

The count: a breakdown of USC’s fall admissions

The pool of students admitted for the fall 2018 semester are diverse and high-achieving. They come from all 50 states, the District of Columbia, Puerto Rico, Guam and American Samoa. (Enrollment commitments are due May 1; the makeup of the enrolled class may differ.) Of the admitted students:

Innovative methods help spring admits find their peer group and feel the embrace of the university before classes begin.