By 2050, America’s nationwide population will resemble the current makeup of Los Angeles — a diverse range of ethnic and  genetic backgrounds.

But most of the genomic data used for studies of disease has been skewed toward Caucasians.

USC researchers in the Department of Translational Genomics are now changing that, making more-representative data available to scientists who need it. They’re working with the Los Angeles County + USC Medical Center, which serves the full population span of Los Angeles. In turn, that yields a complete spectrum of samples available from L.A.’s diverse population, including patients being treated for illnesses that affect specific demographic groups. 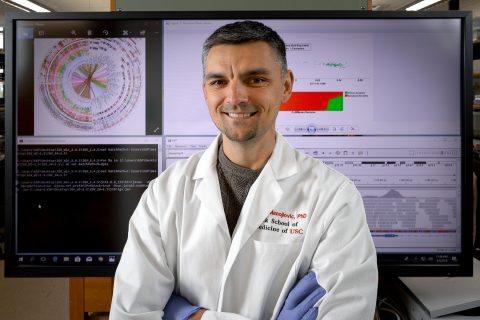 “LAC’s collaboration with USC empowers researchers to study a clinical problem with accessibility to samples that are more representative of the population,” said Zarko Manojlovic, assistant professor of research and director of the Keck Genomics Platform, or KGP, which enables researchers to perform molecular profiling through deep sequencing in hopes of answering specific research questions.

The platform is equipped with the state-of-the-art NovaSeq sequencer and liquid-handling robotics. Researchers perform genomic studies faster and more affordably by using these tools.

One thing that makes the platform stand out, in addition to being a one-stop shop for our entire genome needs, is that the team embraces processing of traditional “tough samples” collected in the past, which contain highly degraded nucleic acid species, Manojlovic said.

These samples have generally resulted in failed sequencing runs and are regarded as undesirable, he explained.

“But we’ve made it our mission for KGP to optimize the workflows capable of overcoming some of the limitations to produce high-quality data.

“Between these capabilities and our in-house infrastructure, KGP will deliver a large reduction in cost. This will let USC researchers ask more questions, to better understand and treat diseases,” he said.

A small part of the big picture

Sequencing genomes is only small part of the picture and only one way KGP takes disease study a big step further.

Biomedical informatics, sample processing, computational infrastructure and, most importantly, deep expertise in interpreting the huge data sets produced as a result are necessary to give researchers the insights they need to find treatments.

The platform will sequence samples provided by a researcher with a specific question in mind, and the data will only be accessible to the particular researcher and collaborators, Manojlovic said.

John Carpten, director of the Institute of Translational Genomics, sees USC’s close work with LAC+USC Medical Center and the local community as essential to treating Angelenos and leading medicine into the rest of the 21st century.

“Since Los Angeles’ population distribution best represents the future of America,” he said, “KGP will serve as the platform to help USC become the leading research institute in the nation, and in the future in medicine.

“We will be able to answer questions that will have clinical impact across a true representation of the majority of the U.S. population.”

There are 1,800 transcription factors encoded in the human genome — and Peggy Farnham wants to understand the function of each one.

For the first time, scientists have developed a method for generating accurate 3-D models of the entire DNA strand of a cell, known as a genome.

Donald Kennedy, the Bing Professor of Environmental Science and President Emeritus at Stanford University, spoke on Jan. 29 about the promise of — and the problems associated with — the human genome map and society’s use of it, both for medical and forensic uses.

The USC Epigenome Center has been awarded a $10.4 million National Cancer Institute grant that is expected to pave the way for more effective treatment and diagnosis for cancer patients.