All great apes are considered severely endangered. It’s possible that 100 years from now, species such as orangutans will be wiped off the planet entirely.

What’s more, apes are the only animals to share 99 percent of their DNA with humans.

USC researchers, such as primate expert Craig Stanford, aim to understand how to better protect these animals. To do that, they must understand the threats they face. Here are four unlikely things that could lead to never seeing great apes again.

There’s an item in your pocket that is killing gorillas: the smartphone.

Coltan is an ore found in all sorts of everyday items, such as phones and Playstation consoles. Eighty percent of the world’s supply is found in the forests of the Democratic Republic of Congo, “the last stronghold of the eastern lowland gorilla,” Stanford said, chair of the anthropology department at the USC Dornsife College of Letters, Arts and Sciences.

“They mine it in rivers, kind of like the way they mined gold in California – very low tech,” said Stanford, a biologist who spent years researching alongside primatologist Jane Goodall and is the author of Planet Without Apes and most recently The New Chimpanzee.

It’s not the mining itself that’s destructive, he said, but rather, the culture around it. Miners aren’t given meals or money. Instead, Stanford said, they’re given guns to hunt for their food and in turn, they end up eating endangered gorillas and chimps.

“You can pick up an orangutan on Instagram for as little as $50,” said James Askew, an orangutan researcher and PhD candidate at USC Dornsife.

Stationed in Indonesia for three years, he was scouring Instagram one day in his hotel room and discovered tigers and gibbons for sale, just within a few minutes.

Much of the selling is into the pet trade. The Indonesian elite scoop up the exotic pets, only to get rid of them when they grow up to be big, strong and not as cute.

The owners drop them off at quarantine or rehabilitation centers, which will attempt to release them back into the wild. While he was in Borneo, he saw about 1,000 orangutans.

“That’s 1,000 incidents of poaching,” he said, noting hunting or catching apes is illegal in Indonesia. “In total, there’s been about six prosecutions for killing or selling ever in the history of Indonesia. There’s no political will or desire to enforce Indonesian law against this.”

Other species like chimpanzees and gorillas are sold to buyers in the Middle East, Eastern Europe or Asia for medical research or to put in zoos, according to Stanford.

If you go to Romania or Poland, [zoogoers] don’t think, ‘Where did this baby chimp come from?’ They don’t think it was taken from a mom who was shot in Africa.

“If you go to Romania or Poland, [zoogoers] don’t think, ‘Where did this baby chimp come from?’” Stanford said. “They don’t think it was taken from a mom who was shot in Africa.”

In some Asian countries, exotic pets are seen as a status symbol, Stanford said.

“At one time a few years ago, there were more baby orangutans being kept as pets in homes in Taiwan than there likely were in the rainforests of Indonesia,” Stanford said.

Chimp meat passes through Paris’ Charles de Gaulle Airport each year, ending up on the plates of restaurantgoers in Paris. It’s off-menu, but ask the right questions and offer cash, and it might end up on the plate.

Bushmeat is a tricky problem, especially in Africa, where it has a long history as a delicacy.

“It’s like telling Americans not to eat turkeys at Thanksgiving,” Stanford said.

The trouble with palm oil

For people who live thousands of miles from ape habitat, there is a way to make a difference: buy sustainable products. 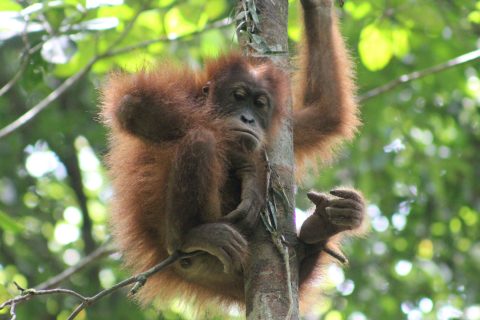 The harvesting of palm oil, which is used in household and beauty items, has led to the destruction of the orangutan habitat, Askew said. Efforts are being made to certify palm oil that’s made sustainably, but Askew says it’s a difficult process and conservationists “have concerns concerns that the supply chain is difficult to quantify, and even ‘sustainable’ palm oil might drive deforestation.”

Nearly half of all the orangutans in Borneo – over 100,000 – disappeared over two decades, likely due to illegal logging, mining and clearing land for agriculture, such as palm oil plantations, according to a recent study.

Home Depot, which carries 1 percent of the world’s lumber, made a vow to only purchase sustainable Indonesian hardwood when it discovered lumber practices in the country were threatening orangutan populations, the species closest to extinction, Stanford pointed out.

“Be conscious of what you’re buying, what’s inside of it and where it’s come from,” Askew said. “That’s very meaningful.”

USC researchers are studying the great apes, getting data on chimpanzees and orangutans in the wild, such as their population status, their rate of decline and extinction threats. That way, governments, NGOs and others can get an accurate picture of the habitat destruction and fragmentation, their habits in light of these threats and how to best protect them.

Such research led to an exciting discovery of a new species: the Tapanuli orangutan.

With only 800 living in the Sumatran mountains, the new ape highlights how dire the plight for apes really is, said Askew, a co-author on the study.

“It emphasizes how little we know about all these species that are going extinct,” Askew said. “We would have never known they existed and they’d be gone in 10 to 20 years.”

It’s also important since they are our nearest relatives. In his latest book, Stanford chronicles the many humanlike behaviors discovered in recent years, and there’s still so much more to uncover.

There’s a couple different routes when it comes to conservation. There’s habitat protection, conserving more of the world’s forests for endangered species to survive and protecting existing habitat, with improved patrols, fencing and security intelligence. Other conservationists aim to work in tandem with industry with tighter controls and focus on sustainability.

That’s where USC comes in again. The USC Center for Artificial Intelligence in Society, a joint venture between the USC Suzanne Dworak-Peck School of Social Work and the USC Viterbi School of Engineering, developed artificial intelligence to fight poachers. It tracks the movements of poachers, using that data to create improved patrol routes. 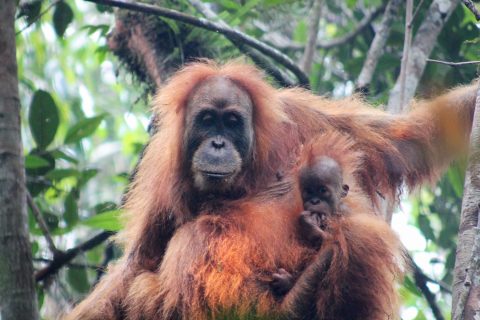 Eco-tourism is being looked at as a way to spread education and incentivize locals to protect these populations, such as Orangutan Haven in Medan, an Indonesian city of 2 million people. Gorilla populations have seen positive impacts to their populations with the popularity of such tourism, which allows folks to see the gorillas in their natural habitat. But researchers wonder if it would work with all great apes. Orangutans travel alone in the trees and chimpanzees are known for being energetic, perhaps not the best personalities for observation.

“It’s really shocking to see how much deforestation, hunting and mining are leading these apes to extinction. For me, driving out to the jungle through an ocean of oil palm was one of the saddest experiences of my life, and something that has driven me to try and make a difference,” Askew said. “My USC colleagues working to study apes in Africa and Asia will [likely] have similar experiences. But I’m also really hopeful that we will continue to work to conserve them and keep producing research to help save great apes.”

He’s also hopeful that having more USC boots on the ground will continue a passion for conservation.

“It’s impossible to go and study great apes in the wild and not want to do something to prevent their extinction,” he said.

Heading toward a world without apes

Great apes could face extinction within our lifetime, USC biologist Craig Stanford warns in a book that will be published on Nov. 5.

USC biologist Craig Stanford wants to keep the great apes from vanishing from the face of the earth.

How cellphones are killing gorillas, and other threats you didn’t know were endangering great apes