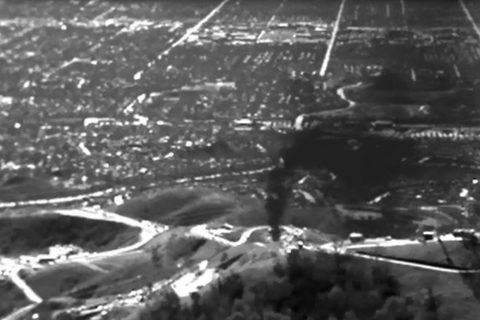 A USC-led analysis of the Aliso Canyon gas leak determined corporate dysfunction by the SoCalGas Co. and lax regulatory oversight charted the path to the largest greenhouse gas leak in U.S. history.

The new study, researchers said, is the first to report what went wrong and why an estimated 97,100 metric tons of methane — more than what 440,000 cars emit in a single year — polluted a Los Angeles neighborhood from October 2015 to February 2016.

The findings have pivotal implications for the nation because the United States operates the largest number of underground gas storage facilities in the world.

“SoCalGas’s Aliso Canyon system failure and the resulting major environmental scandal in 2015 has clear echoes of BP’s Deepwater Horizon oil spill in 2010 and BP’s Texas City refinery explosion in 2005,” said Najmedin Meshkati, senior author of the study and a professor of civil and environmental engineering and industrial systems engineering at the USC Viterbi School of Engineering.

That translates to one major energy sector disaster every five years.

“How many more oil and gas disasters have to occur before a healthy culture of safety is implemented?” Meshkati asked. “The lessons learned from the Aliso Canyon gas leak can improve the nation’s underground gas storage facilities. Better industrial safety culture will protect the health and safety of people, will protect the environment, will help keep electricity and gas prices down and will shield the reputation of industries such as Sempra Energy, the parent company of the SoCalGas Co.” 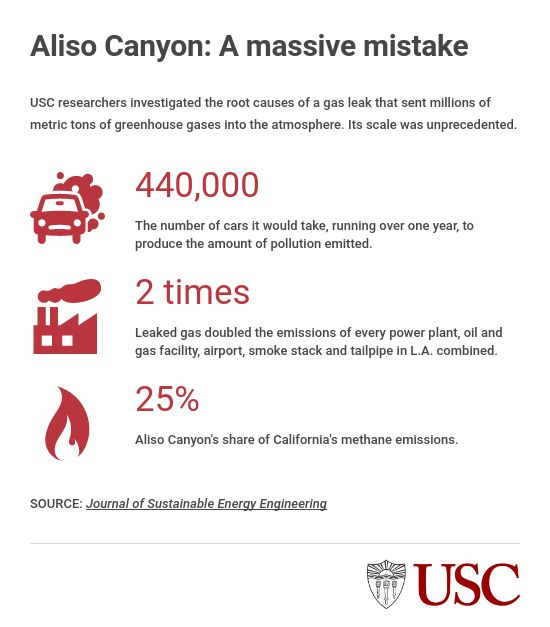 “SoCalGas had lenient requirements for infrastructure record keeping, no comprehensive risk management plan and no testing programs or plans in place to remediate substandard wells,” Meshkati said. “The company needs to improve its safety culture.”

SoCalGas was aware of a possible future leak in the Standard Sesnon 25 (SS-25) well about a quarter century before a pipe ruptured there. Company logs from 1992 say “check for potential leakage past shoe as high as 8,150 [feet].”

The SS-25 well is 64 years old and 8,750 feet deep. An underground safety valve designed to shut off flow to the surface when abnormal conditions occurred was removed in 1979 and never replaced, according to the study.

“If a functional kill valve were in place for well SS-25 in October 2015 when the leak began, the leak could have been stopped in a matter of hours or days rather than after four months,” Meshkati said.

This case study offers tips for nationwide underground gas storage facilities, such as improved well monitoring using up-to-date technology like infrared methane detectors, nonstop pressure monitoring and more training for employees. It notes that logs are necessary to assess possible risks linked to specific wells and that records for mechanical integrity must be documented. (The last time well SS-25 recorded an inspection was in 1976.)

“We believe that a proactive culture of committed leadership, having a questioning attitude, personal accountability, good communication and innovative technology are necessary to ensure that systems act to their full potential,” Meshkati said. “These are among the traits of a healthy safety culture developed by the nuclear industry. It will be beneficial if it were adopted by all safety-sensitive industries.”

Methane is about 32 times more detrimental to global warming than carbon dioxide because of its stronger heat-trapping ability, the study stated.

The federal Clean Air Act does not regulate methane, though it does have strict regulations for carbon dioxide.

Considering that the United States is the most prolific operator of underground gas storage facilities in the world, we must rethink the lack of federal, state and local oversight in this arena, said Maryam Tabibzadeh, study first author and a recent USC Viterbi doctoral graduate when the study was conducted. She is now an assistant professor at California State University, Northridge.

Natural gas is a significant energy source in the United States. It supports 33 percent of electricity generation in America via more than 350 underground gas storage facilities or about 14,000 wells, according to a 2005 report.

These wells were functioning without a national risk analysis framework, which is used to prevent operational failures and to streamline crisis management protocols when accidents happen, the study reported.

After the Aliso Canyon gas leak, Congress passed the Protecting our Infrastructure of Pipelines and Enhancing Safety (PIPES) Act in June 2016. The act created an interagency task force led by the U.S. secretary of energy.

Having a task force in place quickens the response time when accidents happen because studied and practiced procedures are activated, said Meshkati, whose expertise is in major complex technological systems failures such as the Chernobyl disaster, Fukushima Daiichi nuclear disaster and BP Deepwater Horizon oil spill.

“Risk analysis is vital for safe well operations and relies on analyzing prior data records, yet no national standards for well records were in place prior to the accident,” the report stated. “There was no clear overarching agency that was in control of the accident’s intervention and aftermath.”

Without an authoritative agency to direct emergency response, the SoCalGas Co. did not have a clear path for addressing emergencies quickly, nor was it forced to maintain or update aging infrastructure, the report stated.

As of August 2016, California was one of only three states that had regulations addressing well construction, well maintenance and well closures, the report noted.

Meshkati was a member of the steering committee of a seminal report assessing the long-term viability of underground natural gas storage in California. It was prepared by the California Council on Science and Technology, a think tank that recommends policy solutions within the state.

The recently released 910-page report, “Long-Term Viability of Underground Natural Gas Storage in California: An Independent Review of Scientific and Technical Information,” was prepared for California Gov. Jerry Brown at his request.

Who should be held responsible for the Aliso Canyon gas leak?