She soars in two-seater planes and screams down the slopes on a snowboard — but don’t label Erica Leung an adrenaline junkie.

Although she loves the rush of her bold pursuits, the USC architecture master’s student is careful and calculated when taking risks.

“I like to say I know my limits,” she said. “If I pass my limits, I know something will have to give.”

USC felt like the perfect place to land for Leung, who fell in love with the Trojan lifestyle during a summer program on the University Park Campus. Along with the mild climate, she appreciated the university’s diverse mix of cultures. And thanks to USC’s location in Los Angeles, she’s also had many opportunities to practice her brand of adventurousness, from the sea to the skies to the snow.

That was a big draw for the Hong Kong native, who hiked Mount Kinabalu in Malaysia, climbed to Annapurna Base Camp in Nepal and climbed the summit of Mount Kilimanjaro in Tanzania — all before she graduated high school. She grew up skiing on family vacations to Japan and Australia, switching to snowboarding along the way “because it was cooler.”

It took a bit of courage for her to travel halfway across the world to join the Trojan Family. But she found comfort in a familiar area of study, following in her father’s civil engineering footsteps. The 23-year-old completed her bachelor’s degree in mechanical engineering last year and is pursuing her master’s in building science.

Leung also found a natural home with the USC Ski & Snowboard Team, dashing off to the squad’s home turf at Mammoth Mountain for weekend getaways.

Being in the snow and getting away from all the pressure and schoolwork, it’s a retreat for me.

“Being in the snow and getting away from all the pressure and schoolwork, it’s a retreat for me,” she said.

Not content to lazily carve the trails, she embraced her competitive streak by entering snowboard races. She prefers timed events like the giant slalom to trick-based competitions, in which boarders earn points by sliding along rails and hitting big jumps. It’s another sign of Leung’s cautious approach to seeking thrills — she doesn’t want to risk injuring herself with dangerous maneuvers.

That’s not to say timed races don’t have their own hazards. In a competition known as boardercross, Leung has to jostle for position with three other riders in a race down a narrow course riddled with bumps and sharp turns.

“You stick your elbows out as far as possible and try to get to the bottom as fast as you can,” she said. “It can get hairy.”

In her first year of racing, as a sophomore, she competed in the national championships of the United States Collegiate Ski and Snowboard Association. She was the only athlete from USC and didn’t set her hopes too high.

“I pretty much just went in telling myself I’d do the best I could and I’d be happy just to be given the opportunity to represent my school and getting this far,” Leung said.

Instead, she cracked the top 25 in the giant slalom — not bad for her first season. The experience motivated her to work harder. The following year, she was honored as the top rider in Southern California. Now she’s the team’s racing captain and liaison to the regional league, which covers Southern California, Arizona and Nevada.

For Leung, snowboarding offers the perfect cocktail of freedom and self-restraint. It demands complete focus and discipline, clearing her mind of other stresses and concerns.

“You have to know where everyone else is on the course, you have jumps and turns; you have to control your speed so you don’t overshoot corners,” she said. “It’s exhilarating.”

From flying down slopes to flying lessons

She finds that same regimented independence behind the yoke of a two-seater plane. It’s another passion that grew out of her childhood experiences. On family trips, she enjoyed the flights as much as the destinations, fascinated by how a heavy hunk of metal seemed to magically stay aloft. 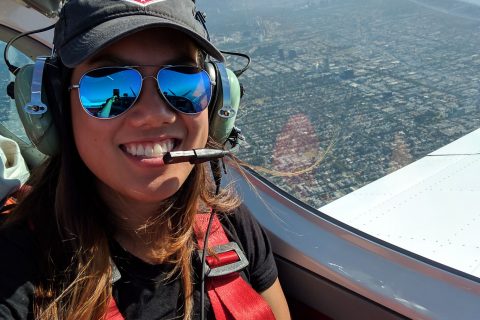 By her junior year at USC, Leung had saved enough from summer jobs to take flying lessons at Santa Monica Airport. She didn’t tell her parents until they came to visit for Thanksgiving, after she had already completed her first solo flight.

Her mom’s face drained of color when Leung broke the news, but her dad was fascinated. After Leung earned her private pilot’s license, she took her dad for an aerial tour of Los Angeles. “He absolutely loved it,” she said.

She has taken short trips around Southern California, hopping to San Diego and Big Bear. She took her boyfriend on a date to Santa Barbara, enjoying brunch and a bit of shopping before returning to Los Angeles.

“It’s freeing,” she said. “You get to skip all the traffic and it’s nice to be able to explore different places.”

It also demands that intense, mind-clearing focus Leung possesses. She rattles off her tasks as a pilot: interacting with air traffic controllers, watching for other planes, reading the weather, navigating no-fly zones and maintaining the correct altitude.

Flying also connects with her academic interests at the USC School of Architecture. Leung recalled a heat wave that hit Arizona last year, preventing planes from taking off. One factor contributing to those soaring temperatures is the “built environment.” Buildings, roads and other heat-intensifying surfaces can cause the mercury to rise much higher than normal.

“With climate change and global warming on the rise, that’s only going to become a bigger problem,” she said.

Designing the environment to beat the heat

Leung is studying strategies to reduce that phenomenon. Using materials that reflect infrared radiation is one option. Another technique is designing buildings that collect and retain warmth in the hot midday hours and release it at night. Natural ventilation could reduce the need for air conditioners, which amplify the heat by spewing hot air into the environment.

“In a city like Los Angeles, you could use shade and the desert winds to keep everything cool,” Leung said.

Although she is still sorting out her long-term plans after graduating in 2019, she envisions a career in the building industry, likely in construction or engineering. She also hopes to stay in Southern California, where a quick escape from the city is always within reach.

“Thirty minutes to the beach, two hours to the mountains — what more could you want?” she said. “I absolutely love it here.”

A study of a tiny region of the brainstem reveals the processes that determine which memories are preserved during highly emotional circumstances.

The veteran educator is at the forefront of architecture, urbanism and cultural theory.

Snowboarder, pilot and engineer finds her home in L.A. and at USC