It’s not every day that scientists make a groundbreaking discovery that can save lives and jumpstart their careers.

But that’s exactly what happened to Pinghui Feng a few years ago in his lab at the Keck School of Medicine of USC. He was studying how the human immune system responds to viruses and infections when he came up with a promising idea. If his strategy panned out, it could strengthen the body’s immunity to viruses and protect against the development of cancers linked to those viruses.

However, the researcher, now a professor of molecular microbiology and immunology, had a problem. He was running low on research funding, and no federal agency wanted to take a risk on his relatively unproven approach.

Pinghui Feng, associate professor at the Keck School of Medicine of USC, is investigating a promising new way to fight back against persistent viral infections.

Pathogens like herpesvirus and HIV can dodge the immune system and stay in the body indefinitely. These viruses can raise the risk of developing dangerous tumors.

Feng discovered these viruses hijack a family of enzymes and shut down our natural defense systems. They target white blood cells known as T cells.

By developing a molecule that targets those enzymes, he hopes to promote T cell activity and supercharge our immune response to repel invading viruses.

That’s when the L.K. Whittier Foundation stepped in. Thanks to its funding of the Innovative Tailored Therapies Initiative at the Keck School of Medicine, Feng received $100,000 to test his idea. He ran lab experiments that showcased the strategy’s potential.

That small investment paid off in a big way. Feng netted a string of major grants from the National Institutes of Health that boosted his current funding to $16.6 million, allowing him to keep his lab running and push his research forward. He’s now testing his strategy in mice, with encouraging early results.

“At that time, it was very critical,” he said of the foundation’s support. “Otherwise I would have had to lay off people and it would have slowed down everything. In research, sometimes you run into a lot of money, sometimes you don’t have any money. You often need that transitional support to carry you through.”

Feng isn’t the only researcher at USC to benefit from the L.K. Whittier Foundation’s funding initiatives. The foundation has invested many millions to help clinicians and scientists at the Keck School of Medicine explore new and innovative approaches to combating disease.

Some of those strategies involve tailoring treatment to the needs of individual patients. Other studies are exploring new technologies that attack diseases more effectively while reducing side effects.

“Investigators at USC are engaged in cutting-edge research that could lead to major breakthroughs in the fight against cancer and many other life-threatening conditions,” said Linda Blinkenberg, the foundation’s director and secretary. “The L.K. Whittier Foundation’s support is designed to make sure these scientists can spend as much time in the lab as possible, rather than worrying about how they are going to fund their research.”

One of the foundation’s main initiatives at USC is a nanobiotechnology research program, involving materials and devices that are a billion times smaller than a meter. Launched in 2007, the collaborative effort brings together scientists who are merging nanotechnology and biology to detect and fight diseases.

Current projects involve the use of nanotherapies to treat eye disease and tumors in the brain, head and neck. One study led by Edward Crandall, chair and professor of medicine at the Keck School of Medicine, is examining how nanoparticles interact with cells in the lung.

Understanding that process might help scientists improve the delivery of drugs to attack lung cancer or help prevent damage from air pollution. Having dependable foundation money has allowed him to test new ideas that could grow into major discoveries.

“NIH funds are very hard to get these days,” said Crandall, who holds the Kenneth T. Norris Jr. Chair in Medicine and is the Hastings Professor of Medicine. “The L.K. Whittier funds enable us to pursue ideas and innovations, striking out in bold new directions for which it is especially difficult to obtain NIH funding support.”

In an initial study, Crandall’s team explored how air pollutants collected from sites around Los Angeles harm the health of lung cells. But to track those miniscule particles, the researchers realized they needed some way to mark them. So they created an engineered nanoparticle tagged with a fluorescent marker. That allowed them to follow the particles as they are taken up, processed and expelled by lung cells.

The project has received two federal research grants to continue exploring how long-term exposure to microscopic pollutants might increase vulnerability to chronic lung diseases like emphysema, cystic fibrosis and cancer.

“This is a perfect example of the importance of the L.K. Whittier funds, which were used for those early studies, leveraging themselves into these big NIH grants,” Crandall said. “The L.K. Whittier Foundation recognizes the value of seeding active scientists at the university to pursue projects that would have difficulty getting off the ground without this kind of funding.” 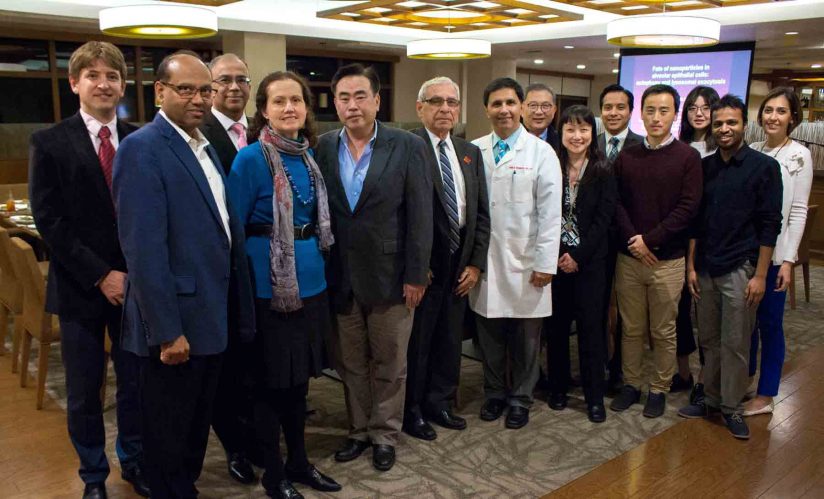 Nanobiotechnology researchers at the Keck School of Medicine of USC have received support from the L.K. Whittier Foundation. (Photo/Eric Weintraub)

“Support from the L.K. Whittier Foundation has led to scientific advances and the development of innovative therapeutic approaches for cancer and other medical conditions,” said Alan S. Wayne, interim director of the USC Norris Comprehensive Cancer Center. “This funding has jumpstarted vital research for dozens of investigators at USC that subsequently generated millions of additional dollars of grant support. Work supported by the L.K. Whittier Foundation has the potential to transform existing medical treatment for cancer and other diseases into improved therapies for patients today and for generations to come.”

Recent projects have involved developing and testing an antiviral agent to prevent cervical cancer, new treatments for childhood leukemia and novel approaches to detecting and monitoring kidney and bladder cancers. In 2013, the foundation renewed its support with a five-year grant.

The initiative also expanded in 2013 to include other diseases beyond cancer. New applications for support have focused on areas like infectious disease, immunology, stem cells, ophthalmology and neurobiological treatments for Alzheimer’s disease.

“It’s almost like startup or seed funding in some cases,” said Jae Jung, Distinguished Professor and chair of the Department of Molecular Microbiology and Immunology. “In others, the researchers have almost finished a project but need that final push.”

As chair of his department, he has seen many scientists benefit from L.K. Whittier Foundation funding, and it has been crucial in attracting bigger grants. For others, it helped bridge a gap in external support — like Feng and his promising findings on viral immunity.

“It really gave him an opportunity to expand his research,” Jung said. “All he needed was a little bit of help and then his work really blossomed.”

Bacteria or virus? Trojan-led startup works on a simple test

Doctors still don’t have a fast and reliable method for diagnosing respiratory infections, but new venture aims at changing that.

Ostrow School researcher delves into persistent questions about how the virus can affect the developing brain.

Pregnant women and their unborn babies are most vulnerable to the Asian Zika virus during their first and second trimesters, USC researchers say.

Keck Medicine of USC researcher Hussein Yassine and his team will study the role of the APOE4 gene, a strong risk factor for the disease.