A team of four USC computer science students and alumni won third prize at the 2017 Facebook Global Hackathon by creating a virtual reality tool designed to stamp out gender bias in the workplace. During the 24-hour hackathon, Team Artemis developed Cue, an app that aims to unearth hidden prejudices by plunging users into a scenario-based, immersive VR environment.

Team Artemis earned a spot to compete in the finals after winning the Facebook Choice award at Stanford’s premier hackathon, TreeHacks, in early 2017, with an Alexa-based fitness and meal-tracking app. The app also won Best Voice-User Experience Using Amazon Alexa and Best Use of Data Visualization. 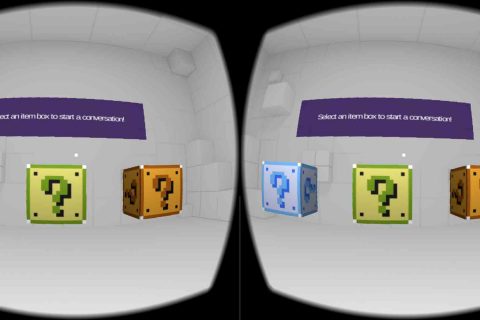 The tool, called Cue, is designed to identify hidden prejudices in speech while the user is talking and interacting through a VR device. (Image/Courtesy of Team Artemis)

In recent years, many workplaces, especially tech companies, have invested resources into unconscious bias training to reduce the kinds of bias that lead to gender and racial imbalance. But studies examining decades’ worth of corporate diversity training sessions have found that in many cases, the training is ineffective.

“It’s usually an hourlong online session where you click through some slides,” Wang said. “We were determined to make it a more engaging and immersive experience.”

In one of the app’s three interactive scenarios, developed for Google Cardboard headsets, a Team Artemis member in the VR space asks the user: “My friend Sam wants to switch teams; do you have any suggestions?”

“Many people will assume that Sam is a male, but of course the name could also apply to a female engineer,” Wang said.

In this scenario, the app uses IBM Watson’s speech-to-text API to identify and highlight specific gender pronouns, allowing users to confront hidden biases that could be lurking in their language.

During the final round of the hackathon, the team presented its creation to a judging panel of tech luminaries, including Oculus VR co-founder Michael Antonov, and won third prize: $2,500 in cash and an Oculus Rift developer kit for each team member.

All four members have a busy year ahead. Wang and Cen have already secured full-time positions at Google after graduation this spring; Benavente is working as a UI engineer at Blind Squirrel Games; Lin is pursuing a master’s degree in machine learning and artificial intelligence at Georgia Tech University.

Nevertheless, the team plans to continue working on expanding the app in the future, including developing additional scenarios aimed at curbing a variety of hidden biases, and integrating machine learning for “sentiment analysis” to determine if each scenario triggers positive or negative feelings.

“We were very proud of taking that idea from concept to working model in such a short time frame, and we’re really excited to see how we can take this idea forward.”