Maria Barocio is 45 and she has Alzheimer’s disease.

She also has four children. The youngest is only 3. Her husband can’t work, because he cares for his wife full time.

While millions of others develop Alzheimer’s and its associated dementia in their 80s or 90s, people like Barocio with what’s called the Jalisco mutation may be diagnosed during middle age. Jalisco gene patients are descended from a common ancestor with roots in Mexico’s state of Jalisco. The mutation, identified in 2006, spread through generations of large families and a limited gene pool. Only 1 percent of Alzheimer’s patients develop their disease due to a known gene mutation. But because of Southern California’s large Mexican population, Keck School of Medicine of USC neurologists see a surprising number of Jalisco mutation cases. And each one of them hits the neurology team in the heart.

Freddi Segal-Gidan, known as “Dr. Freddi” to her patients, works closely with patients like Barocio. She and USC neurologist Helena Chang Chui direct the Geriatric Neurobehavior and Alzheimer’s Center at Rancho Los Amigos in Downey, where they care for about a dozen families affected by the Jalisco gene mutation.

“It’s heartbreaking when we see these patients going through Alzheimer’s at age 40,” Chui said. “Their children are still in school and they have to watch their father or mother go through this decline.” 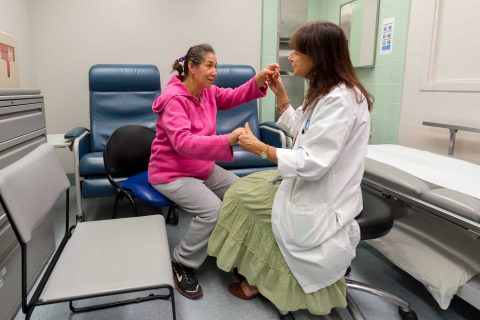 Patients with the Jalisco mutation are descended from a common ancestor in Mexico and have a high incidence of Alzheimer’s. (USC Photo/Gus Ruelas)

Segal-Gidan notes that the disease can carry a stigma in the patients’ ancestral homeland.

“In small villages, when someone suffers from dementia in their early 40s, it’s taboo,” Segal-Gidan said. “There is a belief they were cursed in some way.”

It can challenge physicians in the U.S., too. Physicians aren’t usually looking for Alzheimer’s in a 40-year-old patient, and they sometimes initially misdiagnose Jalisco patients as schizophrenic.

Debilitating stiffness in the limbs, common in Jalisco patients, can mislead doctors to incorrectly conclude that multiple sclerosis is the cause.

Sons and daughters of Jalisco patients are faced with stark choices. They have a 50 percent chance of carrying the mutation, which can be determined with a blood test. A positive result brings the prognosis of early-onset Alzheimer’s and the risk of passing on the mutation to children. 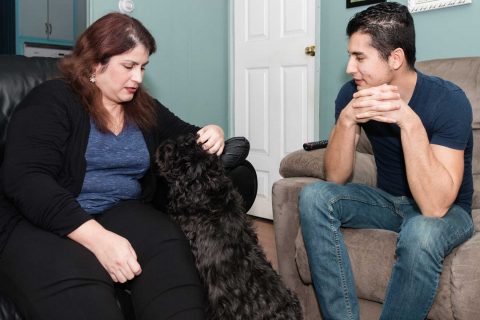 Rosemary Navarro and her son, Ricardo, at their home in La Habra. Navarro lost her mother to Alzheimer’s and her family carries the mutation. (Photo/Heidi de Marco, Kaiser Health News)

“Some decide not to get tested,” Chui said. “They don’t want to know. For those who do, we have a genetic counselor ready in case they get a positive result.”

Pre-symptomatic Jalisco carriers face decisions about whether to get married and have children. They can also consider in-vitro testing for the mutation during pregnancy, and plan career and life choices with the knowledge they will develop the Alzheimer’s relatively early.

“I hope we can stop the spread of this mutation by educating the families so they can speak honestly with their children,” Segal-Gidan said. “We want them to understand they have some control of their own destiny, and make decisions about being tested and procreating.”

A rare opportunity for research

Chui and Segal-Gidan refer some patients and their families to John Ringman, a USC researcher who’s been studying the Jalisco mutation for almost two decades. Some of Ringman’s patients travel long distances to see him at his Los Angeles practice, where he hopes to extend research and education efforts. 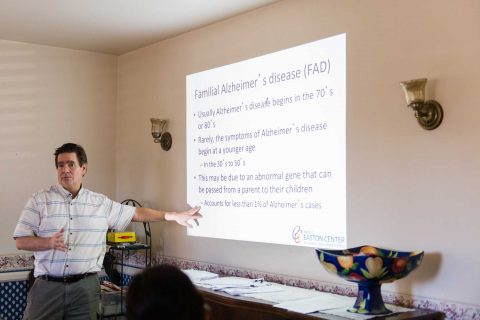 “I saw my first Jalisco patient in 1999,” Ringman said. “I wasn’t particularly interested in dementia at the beginning of my career. Then I saw these families getting Alzheimer’s in their 40s. This isn’t a phenomenon of aging, and I thought if we can learn to prevent this, my life’s work will be accomplished.”

Jalisco mutation carriers give researchers like Ringman an unusual edge in the fight against Alzheimer’s. The timeline of their disease development is pre-set. Biological changes that accompany Alzheimer’s can be monitored before symptoms surface, and medications can be tested to see if they slow or mitigate the disease.

“If we ever find an effective medication, I’ll be out of a job — and I’d love that,” he said.

“Some of our patients can’t work. They were fired,” Segal-Gidan said. “They’ve paid into the system and they should have access to disability, but they need help navigating the process. Some have even faced deportation because they weren’t able to pass a citizenship test.”

At Rancho Los Amigos, Jalisco patients and their families are connected with social services and support networks. Clinicians and social workers assist with applications for in-home services, insurance coverage and emotional support. Medication is monitored and adjusted to help patients with symptoms like depression.

“We can also adjust medication to make some of our patients easier to care for,” Segal-Gidan said. “We want to keep these families together and keep our patients at home as long as they can be there. That’s really my hope.”

New infrastructure could enable researchers to accelerate clinical trials and find new treatments for the disease, thanks to a grant from the National Institutes of Health.

The National Institutes of Health-funded research at several departments will use existing data to explore the issue.