With incidents of violent extremism occurring at an alarming rate, the USC Summit on Global Solutions in the Age of Homegrown Violent Extremism seemed timely — frighteningly so.

“This summit could not be convened at a more critical time, unfortunately,” said Dean Jack H. Knott of the USC Price School of Public Policy; the school’s Safe Communities Institute hosted the Nov. 14 event. “From Berlin to Barcelona, from New York to Nice, from San Bernardino to Charlottesville, each tragedy is a sobering reminder of the realities that we face today, each and every one of us — it can happen anywhere. 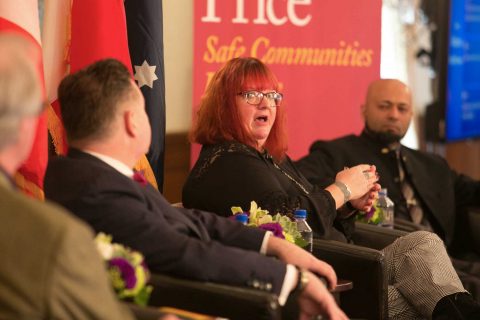 Former extremists Tony McAleer, Angela King and Mubin Shaikh, from left, share their personal stories and what led them to de-radicalize. (Photo/Tom Queally)

“What makes homegrown violent extremism especially challenging is that it is a problem on a global scale, but with very local roots,” Knott added. “This is a very complex problem.”

The event brought together experts, public officials, nonprofit leaders and scholars who focused on developing strategies for detecting and deterring race-, religion- and issue-oriented motivations of homegrown radicalization and extremism recruitment.

As chair of the summit, Professor Erroll Southers — director of the Safe Communities Institute — explained that the event was meant to recognize, applaud and build upon the efforts of the White House Summit on Countering Violent Extremism held by President Barack Obama in 2015 and similar forums that have come before.

Los Angeles Mayor Eric Garcetti spoke about the city’s work to address violence at its roots by supporting community-led efforts — helping people of different religions and ethnicities find common threads to pull toward rather than away from each other.

Jeff Gorell, deputy mayor for homeland security and public safety, brought attention to the city’s Strategies Against Violent Extremism program, as well as the recently launched Safe Spaces project, which actively works with communities to connect Angelenos to clinical psychologists and support groups that can deter them from choosing violence.

We offer something different — a picture of justice, of support, of the pluralism upon which this city and nation was founded.

“We know that hate groups exploit isolation, that they exploit hate, that they allow people to feel their problems are about the injustices put upon them by others,” Garcetti said. “We offer something different — a picture of justice, of support, of the pluralism upon which this city and nation was founded.”

Civil rights attorney and activist Constance Rice, founding co-director of the Advancement Project, gave a keynote address on how lessons learned from her crusade against street-gang violence in L.A. can be applied to homegrown violent extremism.

Rice asserted that there had been a long war on gangs in L.A., and after 30 years of violence there were six times as many gangs and twice as many gang members. That is when she brought together the LAPD, Sheriff’s Department, scholars from local universities such as USC and UCLA, and 40 community groups to develop the report “A Call to Action: A Case for a Comprehensive Solution to L.A.’s Gang Violence Epidemic” in 2007.

“What we suggested was a wraparound, neighborhood-based, comprehensive public health strategy,” Rice said. “It is multi-sectored, coordinated and sustainable, requiring community experts, law enforcement, foundations, schools, churches — you have to organize that entire ecosystem around the mission of reducing violence. The most important thing we did is change from a framework of a war on gangs to attacking the trauma along with the violence.”

The summit featured five distinguished panel discussions. In the first session, moderated by USC Price Professor David Sloane, three former members of extremist groups shared their experiences of radicalization, as well as what led them to de-radicalize and reenter society.

Angela King and Tony McAleer, co-founders of the nonprofit Life After Hate, said that a feeling of shame and being “less than” in their formative years made them receptive to recruitment into white supremacist organizations, where they found acceptance and a sense of power.

They started Life After Hate to build a “community of formers” to help others, also going through those cognitive shifts, get the acceptance, attention and approval they need to extricate themselves from their extremist group.

King declared the importance of identifying gaps in the lives of young people that leave them open for radicalization.

“When I was bullied, there was nobody there to talk to, and I was such a fragile person then,” King said. “My own humanity was stripped, and that made it OK for me to strip others of their humanity. If there was some process to work on that issue, things probably turn out a whole lot different. If we can learn to identify these gaps, we can educate families, teachers and law enforcement about how to identify them and what to do for these voids.”

The summit concluded with an evening session on “Keeping Cities Safe: Leadership in the Age of Homegrown Extremism” as part of the USC Price Athenian Society’s Dean Speaker Series. NBC anchor Colleen Williams led an international panel on a discussion of how municipalities around the world are preparing for and mitigating the risks and consequences of homegrown violent extremism.

The time to change our attitudes and policies toward radicalized individuals is now.

After participating in the final session, Southers provided closing remarks: “If we are to enhance social morality, responsibility and community integrity with the intended outcome of facilitating community-based efforts to identify and explore solutions to this challenge, it begins with acknowledging and removing policies cultivating animosity and stoking alienation.

“The time to change our attitudes and policies toward radicalized individuals is now, and that process begins here.”