Some are starting their own businesses or nonprofits in far-flung corners of the world. Others are pursuing master’s degrees and doctorates or studying overseas as Fulbright scholars.

Six years after USC received the largest gift in the university’s history for undergraduate scholarships, alumni who participated in the highly selective Mork Family Scholars Program are already making a difference in diverse fields. They include engineers who launch rockets into space, entrepreneurs who tackle food waste and doctors who help people recover from traumatic injuries.

For the next four weeks, we’ll be profiling some of the fascinating Trojans who have been recognized as Mork Family Scholars. Today, meet Kaitlin Mogentale, an alum who turns food waste to taste with pulp-based snacks.

Nov. 27: Saving the lives of hospital patients with one simple app

USC Viterbi biomedical engineers develop a system that tracks the vital signs of patients from admission to discharge.

Sarah Urke, who suffered a serious concussion as a competitive synchronized swimmer, aims to broaden knowledge of how to prevent and respond to concussions.

Max Novak’s fascination with Greek and Roman history could lead to a career aa museum curator.

That’s gratifying to John and Julie Mork, whose $110 million gift to USC in 2011 ensured ongoing support for the university’s greatest asset — its promising and talented undergraduates.

Recipients of the Mork Family Scholarship receive full tuition, a $5,000 annual stipend for housing and living expenses, and a personal scholarship adviser. The award is very competitive — every year, about 10 incoming freshmen are selected from thousands who apply for merit-based support, following a rigorous review of applications and interviews with faculty members and current Mork Family Scholars.

Although the Morks aren’t involved in the selection process, they interact regularly with the scholars, attending events such as welcome breakfasts and senior graduation dinners.

“They really care deeply about our students,” said Katharine Harrington, USC’s vice president of admissions and planning. “I think an important part of the success of this program has to do with the extent to which they are involved in the lives of these kids.”

A particularly meaningful component of the scholarship is an invitation to a two-day retreat on Catalina Island. In addition to exploring the island and the USC Wrigley Institute for Environmental Studies, the students discuss ethics and values with the Morks and leadership strategies with USC President C. L. Max Nikias.

Kaitlin Mogentale ’15, an environmental studies major who launched a startup that uses discarded food and vegetable pulp to create healthy snacks, recently came across a journal entry she had written during the retreat and found that the suggestions and guidance she received from the Morks and Nikias still ring true.

“The advice they gave is timeless,” she said. “It was more about your life trajectory beyond your career. What are the values that you hold true and how do you act on them?” 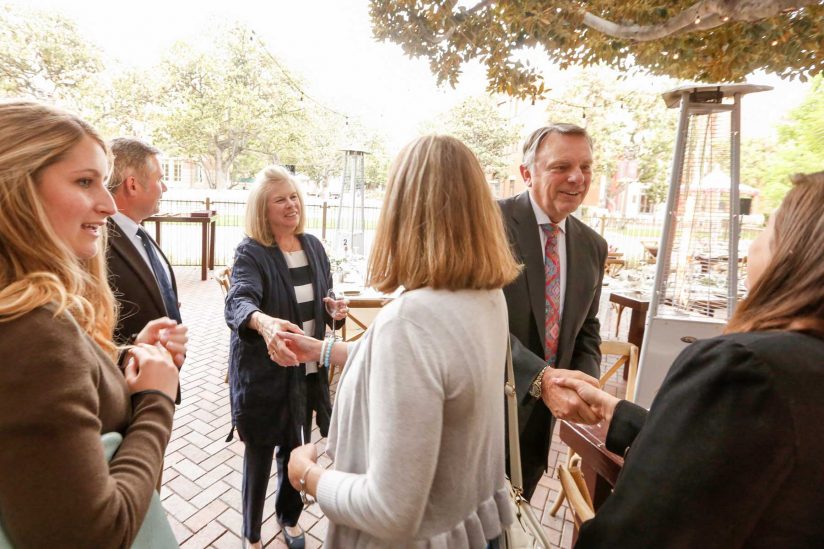 The engagement keeps students motivated, Harrington said, although it can lead to some humorous situations. She recalled one scholarship recipient who dialed John Mork on his cellphone after learning about an upcoming weekend luncheon. The student wanted to make sure the Morks knew that he was a pescatarian — someone who eats no meat other than fish.

“I had to think for a second,” John Mork said with a chuckle. “I was raised a Presbyterian, but I didn’t know what religion that was.”

To Harrington, that conversation is telling. “He’s calling in his lunch order to the chairman of the USC Board of Trustees,” she said. “That is how comfortable these students feel with the Morks.”

Because of its broad mandate to find the best students in the country, the program doesn’t have a set of specific criteria for selecting each year’s cohort of Mork Family Scholars. However, some basic characteristics do apply; these students are passionate, capable, ambitious and care about issues beyond themselves.

One graduate now leads a computer-education nonprofit in Kenya. Another completed bachelor’s and master’s degrees in aerospace engineering in his four years at USC and now invites the Morks to rocket launches at SpaceX.

The quality of the young people on every level — from ethics and values to hard work to intellect to humor — is just unbelievable.

“I’m in over my head,” John Mork said. “The quality of the young people on every level — from ethics and values to hard work to intellect to humor — is just unbelievable.”

The Morks have long-standing connections to the university; John Mork graduated in 1970 with a degree in petroleum engineering and became a member of the USC Viterbi School of Engineering’s Board of Councilors in 2002. He was elected to the USC Board of Trustees in 2006.

Julie Mork is an honorary alumna of USC. Their daughter, Alison ’05, MA ’10, earned her bachelor’s degree at the USC Marshall School of Business and a master’s degree in teaching from the USC Rossier School of Education. Their son, Kyle, has completed graduate courses in petroleum engineering at USC Viterbi. In 2005, the Morks contributed $15 million to USC Viterbi to name the Department of Chemical Engineering and Materials Science.

Although the Morks originally intended their generous scholarship gift to be anonymous, they are grateful that Nikias talked them into attaching their name because now they get to build relationships with recipients. In fact, they consider the students to be part of the Mork family as long as they follow three rules: treat people as they want to be treated, be excellent and be kind.

Other than requesting that at least one scholar each year come from the USC Family of Schools, which consists of 15 schools near the University Park and Health Sciences campuses, the Morks place no restrictions on the scholarships. The result is a diverse collection of students enrolled in degree programs ranging from engineering and human biology to dance and art history.

“We trust USC to find great scholars, long after Julie and I are gone, and to carry on the mission of educating the best of the best,” John Mork said.

John Mork elected to head USC Board of Trustees

John Mork, founder and CEO of Denver-based Energy Corporation of America, has been elected chair of the USC Board of Trustees. He replaces Edward P. Roski Jr., who has chaired the board since June 2008.