For years, there had been talk at the USC Marshall School of Business and its Lloyd Greif Center for Entrepreneurial Studies of putting together a large event for female entrepreneurs.

“Sometimes it takes that one person to get the ball rolling and say, ‘We’re doing this,’” said David Belasco, executive director of the Greif Center.

Jeymi Choi — with Professor Tommy Knapp and the Master of Science in Entrepreneurship and Innovation degree program behind her — spearheaded the effort it took to make the event come to life, he added.

Together with an enthusiastic team of players — including Greif Center advisory council member Suzy Ryoo ’09, who largely recruited the A-list panels, table leaders and musical talent — the key players built a day showcasing contemporary female entrepreneurship and hoped they would get a good crowd.

As it turned out, they got more than they expected.

More than 400 founders, investors, executives, thought leaders and students attended the first annual Athena Women’s Entrepreneurship Summit on Nov. 2 at Town and Gown. The all-day event was co-sponsored by USC Marshall’s Master of Science in Entrepreneurship and Innovation (MSEI) and the Lloyd Greif Center. 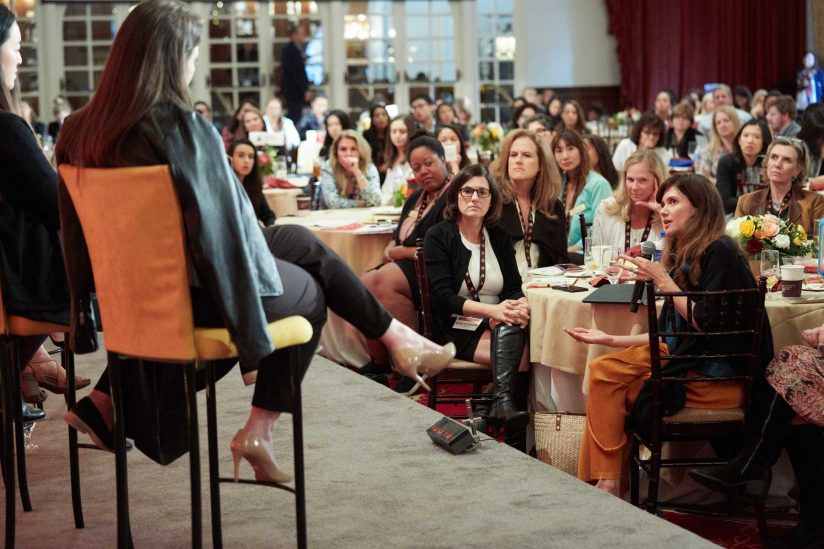 An audience member poses a question to a panelist. (Photo/William Vasta)

“We knew we had a spectacular day lined up,” said Choi, associate director of the MSEI. “But what made it special were the people who came together to find a community of support. We know that meaningful connections were made and that this is just the beginning of greater things to come.”

Athena: the goddess of courage

The buzz in the room was strong from the start. Seats filled quickly. Conversation and card exchanging were so animated it took the announcer several attempts to quiet people down enough to start the program at 9 a.m.

When a hush finally took, Helena Yli-Renko took the stage. As professor of clinical entrepreneurship and academic director of the Greif Center, Yli-Renko welcomed the audience to the summit.

“Athena was the Greek goddess of courage, wisdom, law and justice, strength, the arts and skill. A fierce and ruthless warrior, but also praised for her compassion and generosity,” she said. “Clearly only a woman entrepreneur could be all these things.”

She then introduced Amanda Daflos, director of innovation for Los Angeles Mayor Eric Garcetti’s office, who welcomed the audience to the event.

“It’s not really very hard to find incredible women leaders. We just need to make an effort to look for them, recruit them and support them when they come through our doors,” she said, naming several women in charge of key projects around the city. “Today in L.A., we are proud to say that women are now 53 percent of the commissioners who represent our city. And we revamped the face of leadership in L.A. in six months.”

Four panels over the course of the day brought together entrepreneurs for frank discussions on everything from deciding to launch a business to being taken seriously by male investors.

What I do every day is I forgive myself for the mistakes I make, and I keep trying. I’ve accepted that I live in a state of complete chaos.

“By being the head of a startup, you’re actively asking for every fire,” said Moj Mahdara, CEO and founder of Beautycon.com. “You’re constantly, always recruiting and always raising money … what I do every day is I forgive myself for the mistakes I make, and I keep trying. I’ve accepted that I live in a state of complete chaos.”

Guests were also treated to a rousing talk by USC alumna and Equinox co-founder Lavinia Errico’s keynote address, “Journey to Joy,” as well as to an unplugged set by singer/songwriter Victory Boyd.

Entrepreneurs of the year

“Gender equality is critical in life,” he said. “We want to make sure that everyone gets an equal chance in being successful. We are all in.”

“It’s a remarkable achievement to build a $1 billion business, as you did with Proactiv,” Bay said. “It’s another thing to do it again with Rodan + Fields.”

Lloyd Greif, the founding donor of the Greif Center, presented the award to the women.

At the end of the day, nobody was happier than Choi, who, much like an entrepreneur launching a product, was exhausted, but elated.

“We expect that the Athena community will continue to grow, and we hope that we are in the forefront of building and fostering relationships to help women entrepreneurs,” she said. “Going forth, we hope to gather more support and partnerships that help level the playing field for women entrepreneurs.”

Driving more than $6 trillion in annual output, I.P. has become a critical area of interest for future entrepreneurs and business leaders.

At 45, a USC entrepreneur finds the ideal graduate program in her own backyard

Kimberly Kelly-Rolfe builds a one-stop shop for the accounting, bookkeeping and payroll needs of small businesses.