Anyone who has had cancer — or loves someone who has — understands the fear of the unknown.

How big is the tumor? Has it spread? Did the surgeon get all of it out?

Cristina Zavaleta knows about these worries, and she’s honing tools for doctors and scientists to use to answer these questions better than ever before.

The USC Viterbi School of Engineering imaging expert aims to “paint” cancer so that doctors can better see it in the body, both to detect it and to remove it through surgery. She may never see patients, but her work could help save their lives. 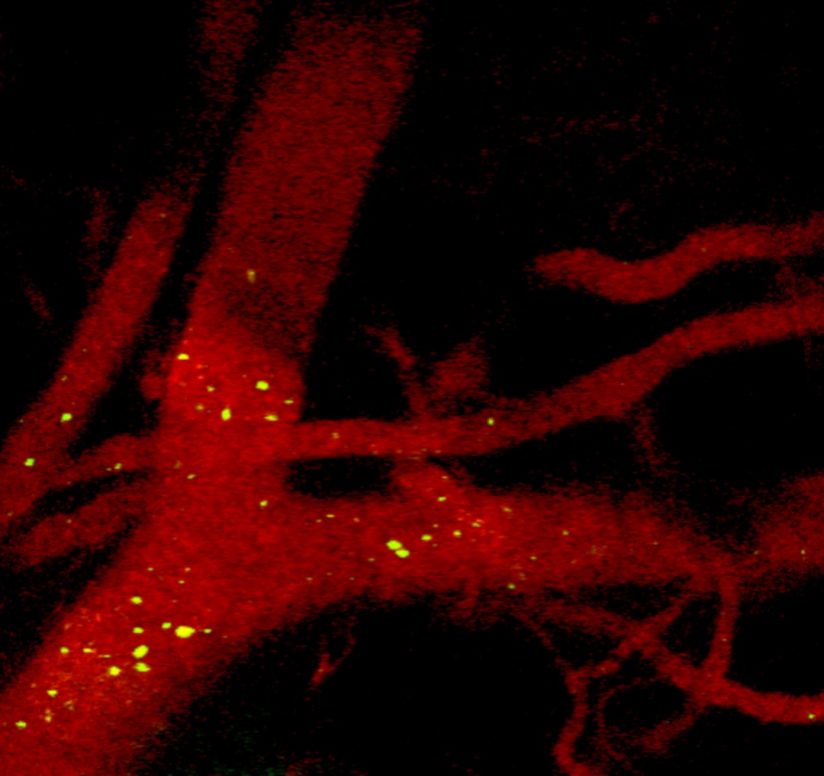 Zavaleta, Gabilan Assistant Professor of Biomedical Engineering and recent arrival to USC from a postdoctoral fellowship at Stanford University, specializes in nano-based molecular imaging. That means she focuses on work of a tiny scale: She develops particles 100 times smaller than the typical human cell.

What do these particles do? They can be used as “contrast agents” — chemicals that can function like pigments to make cancer cells glow.

Health care professionals today often inject contrast agents into the blood stream of patients before they undergo scans. The contrast agents help generate images that spotlight disease or damage in the body. But nanoparticles can be engineered to glow more brightly and to circulate longer in the bloodstream than other types of contrast agents, Zavaleta said. Engineers can also design these nanoparticles to target parts of a tumor, so they seek out cancer and stick to it.

“You can decorate the outside of the nanoparticles with different proteins or antibodies to make them actively target something specific, like certain biomarkers overexpressed on the tumor cell’s surface,” Zavaleta said. “By doing this, we’re actually using the biology and mechanics that our own cells already use.”

Besides early cancer detection, the nano-based imaging can be used by surgeons to paint a tumor’s footprint. While they are operating, surgeons could see cancerous tissue lit up on a screen in the operating room, which would help ensure they remove as much cancer as possible. When they remove tumors, surgeons aim to remove a small amount of healthy tissue around the tumors — something called a tumor margin.

If a tumor margin is missed during surgery, it can be detrimental to the patient, possibly leading to recurrence and repeat surgery.

“If a tumor margin is missed during surgery, it can be detrimental to the patient, possibly leading to recurrence and repeat surgery,” Zavaleta said. “Unfortunately, pathology takes several days, and we only find out later if some of the tumor was missed after surgery.”

Researchers at a few top academic medical centers have been testing these tools during surgery over the last several years, and scientists continue to hone the technology and its application.

Home at the Michelson Center

Zavaleta’s sought-after expertise in molecular imaging takes place in the USC Michelson Center for Convergent Bioscience, a 190,000-square-foot, high-tech research facility that opened on the USC University Park Campus this month. The new center draws on a diverse network of scientists, engineers and students to foster biomedical innovation, fast-tracking detection and cures for diseases ranging from Alzheimer’s to cancer.

“Each of us at the Michelson Center offers a different set of tools to answer some important scientific questions,” Zavaleta said. “I’m excited to bring what I call my ‘imaging tool box’.”

Zavaleta’s imaging arsenal includes tools familiar to practically anyone who has had cancer or treated it: ultrasound, CT, MRI and PET. But she also brings expertise in SPECT — a type of 3-D imaging — as fluorescence (how to make cells glow), photoacoustics (a technique that uses sound to see cancer on a much smaller scale) and Raman imaging (which detects chemical changes in cells).

Depending on the type of image required, Zavaleta knows which tool to employ.

While most of these devices are used to look at structural details, Zavaleta said, scientists can learn much more by pairing them with molecular contrast agents.

“The contrast agents we are engineering in the lab are going to be nanoparticles that have something on their surface that interacts with the body on a molecular level, giving us important functional information,” Zavaleta said.

Under the electron microscope

For Zavaleta, working at the Michelson Center means having access to the latest technology and talented scientists like Scott Fraser, holder of the Elizabeth Garrett Chair in Convergent Bioscience.

“I’m very excited about working with Scott Fraser’s group,” Zavaleta said. “They have some of the most awesome optical imaging tools that exist on the planet, and several of them can answer very important questions about our contrast agents.”

She’s also eager to use the Center for Electron Microscopy and Microanalysis and its state-of the-art electron microscopes — also housed in the Michelson Center.

“The electron microscopes are going to help us see the nanoparticles and how they’re interacting in the body after you administer them,” Zavaleta said. “This is really exciting for the nano community and really important for future clinical translation.”

Can artificial intelligence help to detect and cure cancer?

At the USC Michelson Center for Convergent Bioscience, Fei Sha will bring an expertise in AI and his commitment to collaboration to take on some of health care’s most troubling issues.

‘Precision medicine’ for cancer patients may not always be so precise

‘Painting’ cancer lets surgeons see the tumor — and remove it