Itchy skin, bright rashes, dark blemishes, sun burns. Our skin changes all the time, but usually we don’t give it much thought until we spot a pimple here or a bumpy rash there. But every day your skin has a long list of responsibilities for safeguarding your health: It’s a barrier that prevents disease, a defender against early signs of infection, an early alert system for diseases and a vehicle for our sense of touch. In short, skin is your body’s first line of defense.

With its responsibilities can come skin problems that range from mildly annoying to serious health threats. The question is, which is which? Thanks to the internet and their own curiosity, patients today often present their physicians with self-diagnoses or questionable medical theories. But do you know what’s fact and what’s fiction about your skin?

“Cutting dairy will help my acne.”
Actually, there haven’t been enough studies done on nutrition and skin, says David Peng, chair of dermatology at Keck Medicine of USC. After all, he says, “who would fund it?” Most dermatologists don’t believe food can affect conditions like acne or eczema, he added, “but if the patient swears it, then we always say if you believe that, then just avoid it.” 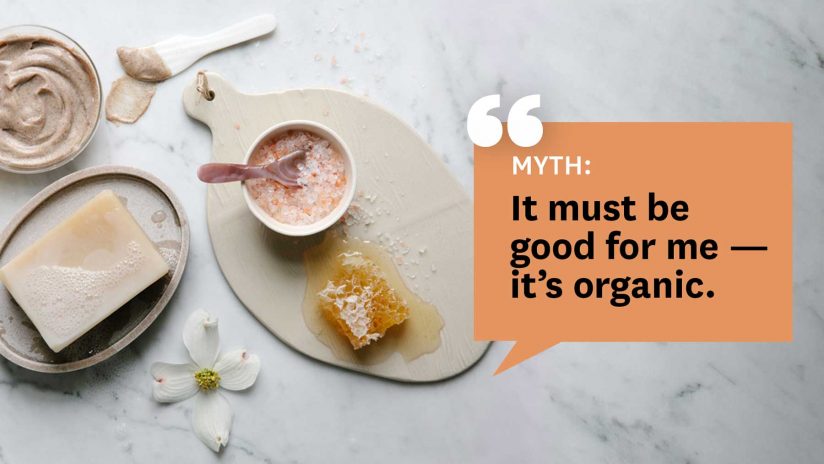 “It must be good for me — it’s organic.”
Ingredients grown organically are free of synthetic additives like pesticides, chemical fertilizers and dyes. But just because a face cream or an eyeliner is an organic skin care product doesn’t mean that it’s healthier — or that you won’t have an allergic reaction to it. “A lot of plant-based products are common culprits for causing skin rashes,” dermatologist Ashley Crew says.

“I’m not at risk for melanoma because I only went to a tanning booth once.”
Tanning beds are fitted with UV lamps that give a dose of light that mimics the sun’s rays. But trying to give yourself a “healthy glow” might have the opposite effect: Even one visit seriously increases the risk of developing melanoma, dermatologist Binh Ngo says. “The majority of my melanoma patients in their 20s and 30s got it from tanning beds.”

“I have a lot of moles so it’s no big deal if one or two changed a little.”
A changing mole deserves attention, no matter where it is on your skin or how many other moles you might have. Note if a mole grows or shrinks, changes color or suddenly appears where no mark existed before. This could indicate the potential for developing into melanoma, a type of cancer that’s more likely than other skin cancers to spread to other parts of the body if not caught early. 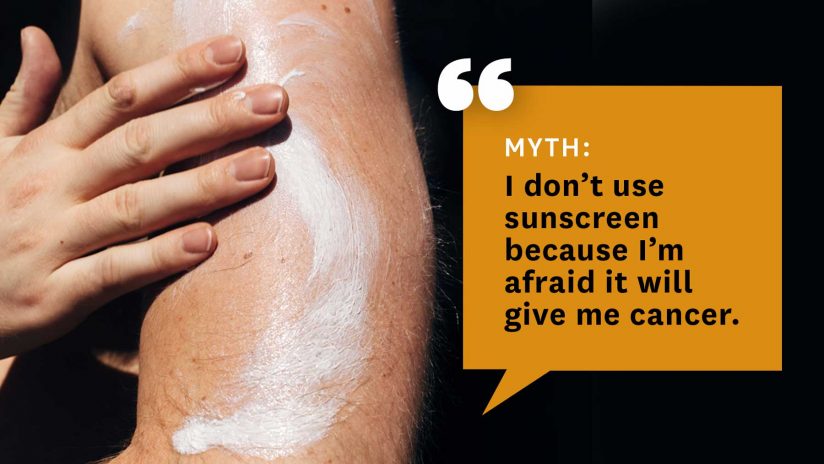 “I don’t use sunscreen because I’m afraid it will give me cancer.”
No, no, no, Crew says. “Sunscreen is one of the most important tools in preventing skin cancer.” But it’s also not a suit of armor. Some lotions need to be reapplied on the skin every few hours, especially after you go in the water or sweat from physical activity. Apply sunscreen early and often, choose broad spectrum with SPF 30 or higher, wear a hat and protective clothing to cover your skin, lips and eyes and grab shade when you can.

“A few blotchy patches on my skin is just a reaction to my lotion.”
Brown, thickened, velvety patches on the back of the neck could be a sign of diabetes. The name for the condition is “acanthosis nigricans,” and when Peng notices it on a patient, “oftentimes I can tell if someone is pre-diabetic before they even get their lab [results] back,” he says. Blotchy skin that loses sensation could be the first indicator of leprosy. Symptoms begin with “a small redness,” dermatologist Maria Teresa Ochoa says. Then patients lose the feeling on that patch of skin. But don’t be afraid of leprosy — today the disease is highly treatable.

“This bright rash is from too much sun.”
Sometimes. But a butterfly-shaped rash on your face could be a sign of lupus, an autoimmune disorder. The technical term is “photodistributed erythema.” The skin rash spreads across the cheekbones and nose with sun exposure. “It looks like a butterfly in the middle of your face,” Peng says. A blistering rash could signal a herpes infection, dermatologist April Armstrong says, or it could be “a really bad drug reaction.” Either way, don’t wait to get it checked out.

While the deadly skin cancer has risen nationally for more than 30 years, its growth in Los Angeles County has slowed.

More than 1 billion people are at risk for this skin disease: Have you heard of it?

Graduate student at USC’s Spatial Sciences Institute wants to boost awareness for a disease caused by a parasitic flea.

USC-led study reveals that melanoma patients with deficient or mutant copies of the gene are less protected from harmful ultraviolet rays.

Compound from common protein improves wound healing on diabetic skin in the lab.