It was at East Los Angeles College, and since she was in high school at the time, she could take classes for free.

Photography became an obsession, and she was often spending 12-hour days on campus finishing projects.

“You’d be in the dark room for four hours and then you’d be like, ‘I’m going to go get Carl’s Jr.’ Then you’d shove it down your throat and run back across the street to your enlarger,” said Montana, a first-year MFA candidate at the USC Roski School of Art and Design. “Photography kicks you in the butt that way.”

Photography found Montana at a tumultuous time. She had been out of kicked out of Theodore Roosevelt High School in Boyle Heights and was doing continuation school from home. She was into punk rock, dying her hair pink and purple, going to shows and partying with friends.

“In the punk scene, we all came from poverty and we felt trapped,” said Montana, 29. “Punk was a way of destroying all identities placed upon us.”

Her friends were supportive of her photography, and the camera became an assumed part of Montana. She was there shooting when they hung out after shows, her friends drinking and boisterous. Her camera was by her side on the streets and in the homes in her neighborhood, shooting her best friends, her mom and her cousin Carlos.

I stumble on words, on everything else. I don’t stumble in photography.

“When I pick up a camera, that’s it,” she said. “It’s the way I know how to speak. I stumble on words, on everything else. I don’t stumble in photography.”

Her first photos were shot on film and in black and white, making the early 2000s look like a more distant time.

“It’s a lot of people who are now gone,” Montana said of her early images.

Her cousin Carlos — 21 at the time — was killed in broad daylight in Boyle Heights in 2007. Her mother died due to complications related to Hepatitis C in 2010, a time period she chronicled in her first solo show, Tear Drops and Three Dots, at the Vincent Price Art Museum at East Los Angeles College last year. It showed her home life as her mom’s illness progressed and the aftermath of her death.

“It’s like a family album but also haunting in a way,” she said.

Study and storytelling in New York

Montana earned her Bachelor of Fine Arts from the School of Visual Arts in New York, where she frequently told students about the Chicano movement and the history of Mexican-Americans. She felt many of the students were unfamiliar with that large segment of the U.S. population.

She wanted to come back to L.A. — and to USC — to continue showing that community.

“Even though we live in the city of Los Angeles, a lot of these places — Boyle Heights or South Central — it feels like towns that are forgotten,” she said. “I thought there wasn’t visual representation of Los Angeles that showed people who were marginalized. It wasn’t showing my Los Angeles.” 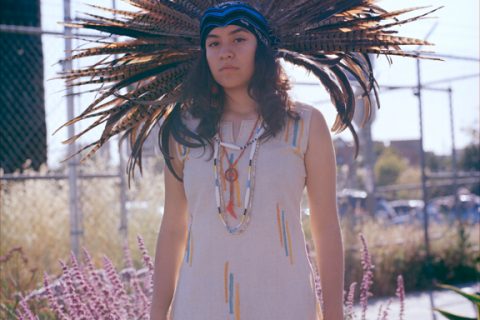 Her latest project is I Dream of Los Angeles, which chronicles the people of her neighborhood, and is on display at The Main Museum in downtown Los Angeles. She’s also its artist in residence, doing workshops and having studio space there.

“This is my Los Angeles,” she said of the solo exhibition.

It’s a collection of portraits — some of friends and acquaintances — taken throughout Boyle Heights. There’s one of Krystal, a teenager in an indigenous dance costume set against the backdrop of a school’s chain-link fence. Montana says danza, the indigenous dance form, saved Krystal from the streets and “gave her a purpose” — just like photography did for Montana.

“I had been on the streets since I was 12 or 13,” Montana said. “You just think you’re going to die. You heard about everybody dying – whether it’s a stray bullet or somehow. You don’t think you’ll live to be 18 or 21.”

Montana’s work highlights the plight of Mexican-Americans who have been in L.A. for generations but still struggle to achieve what they see as an untenable American dream, she said.

“There’s a rhetoric that’s still being taught that you’re supposed to transcend poverty and be able to go to college, buy homes and become middle class,” she said. “It’s a fallacy.”

But she remains hopeful that cycle can break. She’s attempting to break it herself, as a first-generation high school and college graduate. And now another first: the first to attend graduate school.

“The Roski School is lucky to have photographer Star Montana join our new class,” Provost Michael Quick said. “She tells dynamic and engaging stories about our society through her art. She is truly an artist who cares deeply about our culture and our city.”

Her dream is to be a college professor, to teach others the power of such personal work.

“I think it’s important to be vulnerable with myself and through my teaching,” she said. “At art school, my professors were really vulnerable and open and that’s what inspired me to really teach — them sharing their narratives.”

When she thinks about the purpose of her work, she relates it back to her first passion: punk rock.

“I think it’s just seeing what is real, even if it’s not beautiful. It’s being able to show that it exists,” she said. “I think that’s why we were so angry [in the punk scene]. We felt like we didn’t exist.”

New initiative launches at a contentious time for politicians and policymakers.

The poet, philosopher and scholar will lead conversations with students on artistic expression.