Sei Fujii, who spent decades advocating for the civil rights of Asian immigrant, earned a law degree from USC in 1911. Yet the émigré was legally excluded from practicing law in the United States based on his race and place of birth in Japan.

On May 24, the California Supreme Court righted that wrong, unanimously granting Fujii his law license — 63 years after his death — citing Fujii’s “work in the face of prejudice and oppression” to “make our society more just.” 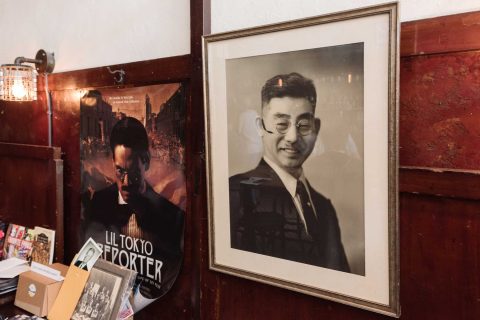 A portrait of Sei Fujii, who graduated in 1911 (Photo/Chris Flynn)

Kanazawa, a partner with McGuireWoods LLP in Los Angeles, and his team wrote the petition and filed the motion for the court to admit Fujii to the bar at the request of two of his firm’s clients, the Little Tokyo Historical Society and the Japanese American Bar Association.

Kanazawa and McGuireWoods agreed to take the pro bono case in 2014 because they saw parallels between developments in Fujii’s time and the political polarizations and divisive attitudes that have defined the country in recent years.

“What was done in [Fujii’s] time period is vital to what is happening today,” Kanazawa said.

Kanazawa and his team spent months conducting legal research and writing the motion, motivated not only by the courage of Fujii, but also by the strength of his longtime colleague J. Marion Wright, a 1913 USC graduate who worked with Fujii for decades.

To defend Japanese-Americans in court matters ranging from accidents to contracts, Fujii teamed up with Wright, who was a licensed attorney and a trusted advocate in Los Angeles’ Japanese community. Fujii was prohibited to practice law because, as an alien Asian (Fujii was born in Japan in 1882), he was ineligible for citizenship under federal law. Only “free white persons” and “persons of African descent” could be naturalized.

A landmark case that the two men took to the U.S. Supreme Court ended with the construction of a hospital serving the Japanese community in the Boyle Heights neighborhood of L.A. (Jordan v. Tashiro, 1928).

Following that victory, Fujii continued to work throughout the 1930s and ’40s on many fronts to assert the rights of immigrants in L.A. and to heal the divides between the cultures. He ran a radio program and published a bilingual newspaper, the California Japanese Daily News. Both outlets promoted the accomplishments of young Japanese-American citizens and warned the Japanese population of the gambling clubs in Little Tokyo and the gangsters that ran them.

After World War II when he was held in an internment camp in Santa Fe, N.M., Fujii set out to challenge the Alien Land Law of 1913, which prohibited aliens ineligible for citizenship from owning land in California. He bought a small piece of land, and when the state tried to confiscate the property, he fought the case to the California Supreme Court. In 1952, the court ruled the law unconstitutional (Fujii v. State of California). It ruled that the law’s real purpose had been to eliminate Japanese farming competition in the state and that the law violated the 14th Amendment.

Fujii became a U.S. citizen in 1954 at age 72. He died of a heart attack less than two months later.

Six decades on, Kanazawa sees Fujii’s lifelong efforts to bring people together as exemplary for the law profession and as instructive for answering a fundamental question: What does it mean to be a lawyer?

As lawyers in a free society we have a duty to remind people about our shared values.

“As lawyers in a free society we have a duty to remind people about our shared values,” he said. “Shaping how we get along and work together — that’s our job.”

Kanazawa, who is Japanese-American and comes from Honolulu, remembers finding that worldview in the people he met as a student at the USC Gould School of Law: former deans Dorothy Nelson ’56 and Scott Bice ’68, as well as Gordon Wright ’48, who mentored Kanazawa at Lillick McHose in L.A.

“What they taught was we can have differences, but if we respect each other, we can figure it out,” Kanazawa said.

Learning from the past

Meanwhile, the impact of Fujii’s posthumous bar admission is felt among the current crop of Japanese-American graduates at USC’s law school.

For Mike Mikawa ’17, who was briefly involved at the beginning of the effort to honor Fujii, it was a moment to celebrate. Mikawa’s maternal and paternal grandparents were among the 120,000 Japanese-Americans incarcerated during World War II. Learning their stories and visiting the internment camps were key to Mikawa’s decision to pursue a career in law.

“As a country, we should strive to continue learning from the injustices of our past so that we do not repeat them,” he said.

In August, at a celebration of Fujii’s admission to the bar, Kanazawa told the audience: “For me, the central message is not in how much courage it took for Fujii to stand up, but in how much courage it took for his friend and colleague J. Marion Wright to also stand up, when the entire nation wanted to lock us up because we looked like the enemy. It took courage for Wright to stand up for love in a sea of hate. I hope this honor reaffirms our commitment to love rather than hate.”

Founder of Immigration Clinic to be installed as the Sydney M. and Audrey M. Irmas Endowed Clinical Professor.