As a molecular biologist, Kaori Noridomi gets an up-close view of the targets of her investigations. But when she began studying the molecular structures of the rarely diagnosed autoimmune disease myasthenia gravis, she decided to step out of the lab for a better view.

Noridomi decided she should meet patients who have it. She went so far as to attend a fundraising walk that supported research of the disease.

“Patients are just waiting for breakthroughs in research and better treatment,” said Noridomi, a researcher in Professor Lin Chen’s Molecular and Computational Biology Lab at the USC Dornsife College of Letters, Arts and Sciences. “They may also end up with other diseases because the disease attacks their immune system. I met one patient who had myasthenia gravis and had also dealt with four different types of cancer.” 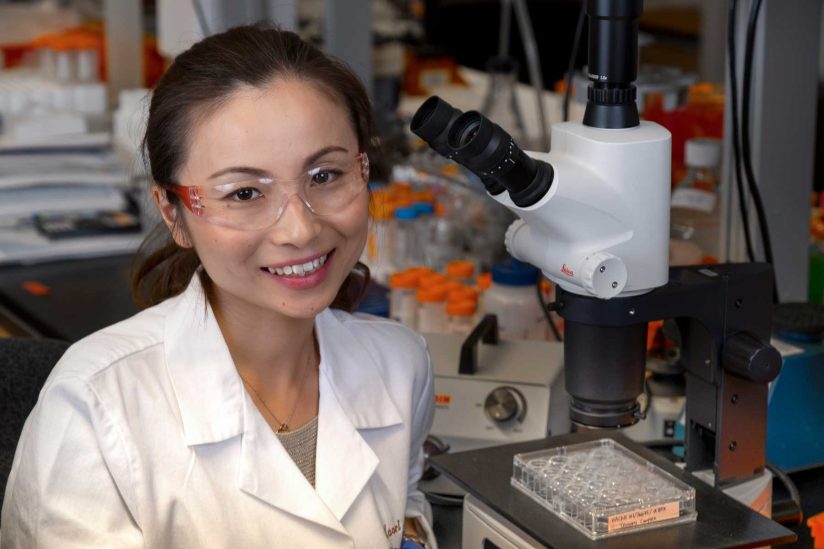 The development of the crystal structure gives scientists a clear view of exactly how the disease behaves and interferes with brain-to-muscle signals. The ability to see these interactions will likely accelerate research of the disease and could possibly lead to new disease-targeting therapies, said Chen, the study’s corresponding author and a USC Dornsife College professor of biological sciences and chemistry.

“Because of this finding, we may also find a better quantitative way to identify patients,” Chen said.

An estimated 36,000 to 60,000 Americans — around 20 per every 100,000 — are affected by myasthenia gravis each year. At least, that’s the estimated number of patients who receive the diagnosis. The Myasthenia Gravis Foundation of America believes far more have the disease, but they are not diagnosed.

Diagnosed patients may end up on therapies that treat one or some of the symptoms — but not the disease itself, said Noridomi, a PhD candidate. The symptoms may range from weakness in the facial muscles and eyes to slurred speech.

Chen, Noridomi and their team of researchers noted in the study that myasthenia gravis is “the first, and so far, only autoimmune disease with a well-defined autoantigen target,” alluding to the “nicotinic acetylcholine receptors” that the disease’s malfunctioning antibodies attack.

These are the same kind of receptors that respond to drugs such as nicotine. In the muscles, though, these receptors have a specific job: receive and transmit the brain’s orders to contract muscles.

Myasthenia gravis is most frequently diagnosed by detection of those distinct, rogue antibodies. Scientists first identified myasthenia gravis as a condition in 1877. The USC scientists noted that the disease’s pathology wasn’t understood until the 1970s when researchers realized that disease’s antibodies were, for the most part, attacking a specific receptor in the muscles.

With the crystal model, the scientists were able to see the disease’s interactions with the receptor as if it were frozen as a moment in time. They also saw that it had cross-linked with several receptors to accelerate the degradation of their proteins.

“Our studies suggest it is possible to develop drug molecules to inhibit the binding of a large fraction of MG antibodies to the receptor,” the scientists wrote.

However, scientists remain unsure why some patients experience more severe or widespread symptoms than others.

“It’s a little bit of disease and a little bit of heredity that cause this,” Noridomi said. “In some people, the level of symptoms may be so slight and varied that they may not even go to the trouble of finding out if they have a disease. By that, I mean, maybe they just don’t feel good one day, like they don’t feel like going to work. They don’t know that ultimately they are suffering an attack.”

Noridomi said she believes the team’s findings will lead to greater scientific understanding and may give patients long-awaited hope.

“It has been very touching to hear their difficulties,” Noridomi said. “Since there is no good treatment right now, they are really waiting for more research to come.”

The study co-authors were Go Watanabe of the USC Norris Comprehensive Cancer Center, as well as Melissa N. Hansen and Gye Won Han, both from USC Dornsife.

Through crowdsourcing, researchers at the Keck School of Medicine of USC have aggregated some of the largest brain scan data sets for certain neurological and psychiatric disorders.

USC scientists in different labs take on a neurodegenerative disease

Haoze (Vincent) Yu and Kate Galloway receive grants for a collaborative project that demonstrates their creativity and independence.