The W. M. Keck Foundation is giving $10 million to support a USC Health Sciences Campus facility critical to advanced patient care, expanding upon the foundation’s longstanding and transformative support to the university. 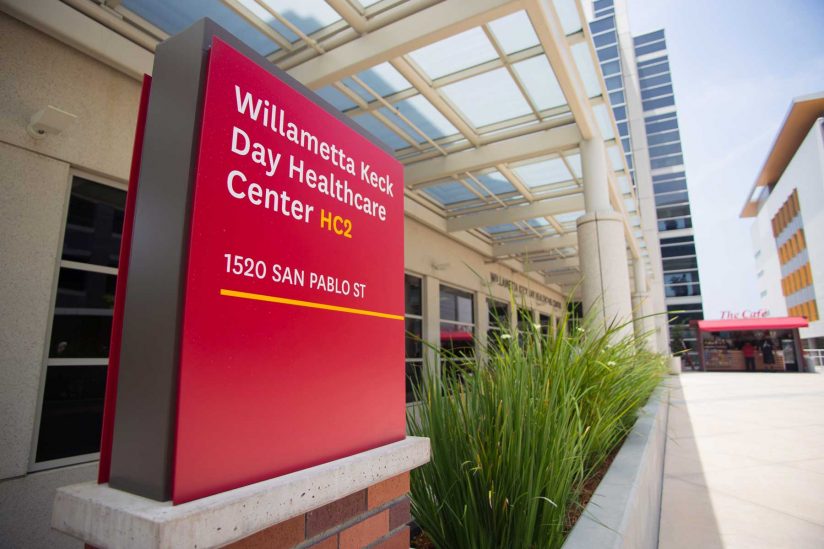 The generous gift names the Willametta Keck Day Healthcare Center, one of USC’s largest outpatient facilities, which houses Keck Medicine of USC clinics that cover almost all medical disciplines, from primary care to surgical specialties. With the gift, the foundation adds to the $150 million it provided in 2011 to launch the Keck Medicine Initiative — part of the Campaign for USC — and to advance USC’s innovative medical research and education.

Reaching back to 1999, when it named the Keck School of Medicine of USC through a $110 million gift, the W. M. Keck Foundation and its president have dramatically accelerated the progress of USC’s medical enterprise. The Los Angeles-based foundation and its chairman and CEO Robert A. Day have remained stalwart supporters of the university.

The foundation’s gift honors one of the foundation’s founders, Willametta Keck Day, who died in 1985. She was the daughter of William Myron Keck and Alice B. Cominski Keck. William Myron Keck founded the Superior Oil Co. in 1921 and created the W. M. Keck Foundation three decades later. One of the nation’s largest philanthropic organizations, the foundation supports outstanding science, engineering and medical research and undergraduate education.

Willametta Keck Day’s name now graces what had been known as Healthcare Center 2, a modern, 5-story medical building in the heart of the USC Health Sciences Campus northeast of downtown Los Angeles.

With this gift, the W. M. Keck Foundation and members of the extended Keck family have donated nearly $300 million to USC, placing them among the most generous benefactors to the university.

“We’ve seen impressive progress from USC in becoming a major medical center in Southern California,” Day said. “The work underway on campus and at Keck Medicine of USC hospitals and clinics every day is inspiring and underscores the importance of continued investment in academic medicine for the benefit of Southern California, where the Superior Oil Co. had its headquarters for many years.”

The Campaign for USC is an unprecedented fundraising effort to advance USC’s academic priorities and expand its positive impact on the community and world. When launched in 2011, the campaign had the largest fundraising goal ever announced in higher education — $6 billion. After exceeding its goal nearly 18 months ahead of schedule, the campaign continues to draw unparalleled support for the university’s mission and has been extended through 2021.

A new study will follow patients who receive palliative care at home and in clinics.