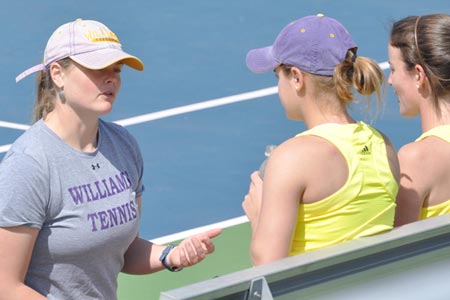 “We are delighted and excited to welcome Alison Swain to the Trojan Family,” said Swann. “She is a proven winner as a head coach. Winning a national championship at any level is difficult to do; winning eight of them like Alison has done in a 10-year span is beyond impressive. We are confident that she can bring the Women of Troy to that championship level.

“She has a vision and a plan for our program. She is an educator and a developer of tennis players, of scholar-athletes and of women. She will create a supportive and healthy culture for our program that will lead to success in the classroom, in life and on the tennis court.”

“USC has an exceptional athletics tradition,” said Swain, “but more importantly the university truly values creating an overall amazing experience for its student-athletes in the classroom, on the court and beyond.

“I am honored to have this opportunity to work with the players to create an exciting future for USC women’s tennis. I can’t wait to meet the entire team and get started.”

Swain, 38, posted an .889 winning percentage (224-28) in her 10 seasons (2008-17) at Williams, including 48-2 in NCAA tournament play. She led Williams to NCAA team championships in each of her first six seasons — an NCAA Division III record and tying Stanford for most consecutive at any level — as well as in 2015 (going 25-0) and the just-concluded 2017 campaign.  In her other two seasons, Williams was the NCAA runner-up in 2016 and was third in 2014. She also helped Williams win five conference championships.

She also was an assistant professor of physical education at Williams.

What an inspired choice.

“What an inspired choice,” said Timothy Russell, chief executive officer of the Intercollegiate Tennis Association (ITA). “USC has made a triple crown appointment. With Alison Swain, the Trojans have a great coach with a championship pedigree, a fabulous teacher with a proven commitment to the highest levels of academic achievement and a splendid mentor of extraordinary character. Alison is a proven leader in the world of college tennis, including as a magnificent member of the new ITA Board.  She is poised for an incredibly successful future.”

Swain was the second person in any division to win an NCAA tennis team championship as a player and a coach. She co-captained Williams’ 2001 NCAA championship squad, the first in school history.

After graduating from Williams in 2001 with a degree in American studies, she taught eighth grade and coached the girls’ tennis team at Woodward Academy in College Park, Ga., for three years, winning the region each year and getting to the state finals in 2004.  She received a master’s degree in education from Washington in 2006 and then taught at Telluride Mountain School in Colorado for a year before returning to her alma mater to take the Williams head job.

Swain is a native of Bainbridge Island, Wash. She is a member of the board of directors of the ITA through June 2018.  She and her mother, Sue Swain, were the nation’s top-ranked mother/daughter doubles team in 2003, winning both the National Mother/Daughter Indoor and Grass Court doubles tourneys. She has been an instructor in indoor cycling and downhill skiing, as well as a white water rafting guide.

The win means an automatic berth in the upcoming NCAA championships.

In her role with baseball’s world champs, Lydia Wahlke negotiates contracts, manages the restoration of Wrigley Field and oversees the team’s brand.

The Trojans now await the unveiling of the 2017 NCAA Championship bracket Tuesday.