When you’re one in a sea of thousands of students, sometimes it’s hard to spot your family.

But for Keri Prather, it wasn’t hard to miss the bobbing image of her face in the crowd.

Her sister, Alysa Prather, came up with the idea to take her sister’s image and put it on sticks for friends and family to wave in the air. There was a gap-toothed kid one, a elementary school yearbook photo and a recent pic complete with a Snapchat filter.

But Keri Prather, who graduated with a degree in popular music from the USC Thornton School of Music, wasn’t the least bit embarrassed. Actually — she was grateful.

“I have a lot of people here, my friend flew in from Japan,” said Prather, who wants to work in the music industry. “It’s nice to have everyone here.” 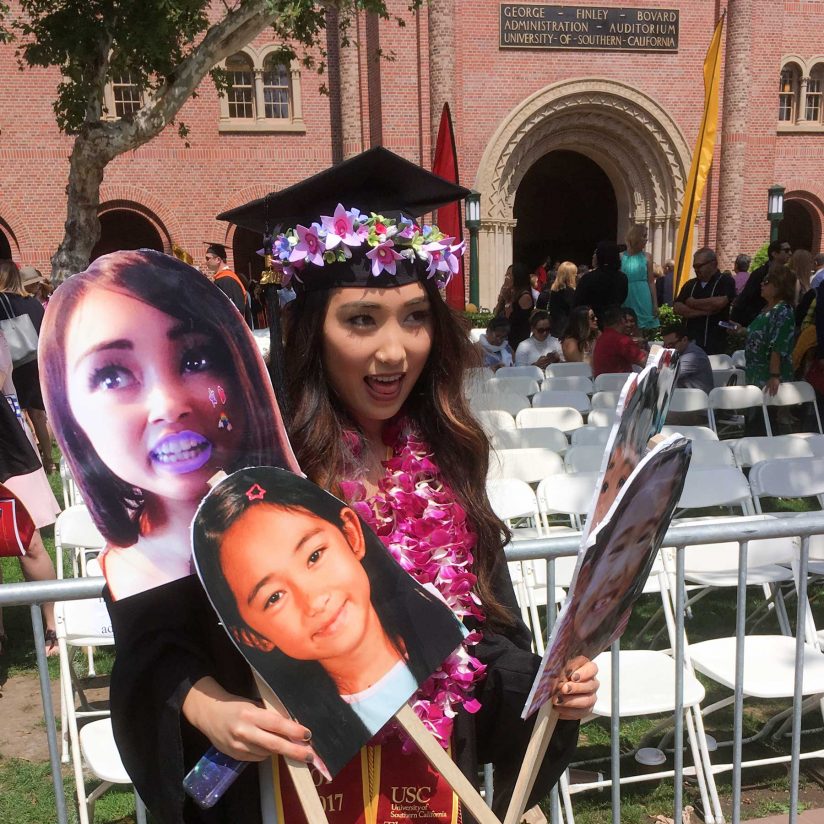 Keri Prather’s family found a way to get her attention in the crowd. (USC Photo/Joanna Clay)

A friend flew in from Washington, D.C., and her sister, mother and father came in from Japan.

“It’s almost very surreal — we live 5,000 miles away,” her father, Dana Prather said, noting it’s one of the few times they’ve been on campus together. “We’re really proud of her.”

Word of the day: ‘Surreal’

Surreal was a good way to describe much of the day.

Trojan Will Ferrell, the star of Anchorman and Old School, delivered USC’s 134th commencement speech, telling how he used to crash lectures dressed as a janitor. One professor ended up spotting him on campus one day – not angry at all. In fact, he invited him to do it again.

“Moments like these encouraged me to think maybe I was funny to whole groups of people who didn’t know me,” he said to a crowd estimated at more than 60,000. “And this wonderful professor had no idea how his encouragement of me, to come and interrupt his class no less, was enough to give myself permission to be silly and weird.”

Cooper Nelson had the task to open for Will Farrell — a new job for her.

But the valedictorian wasn’t nervous about addressing her fellow graduates — or a few celebrities in the stands (hello, Dame Helen Mirren).

“I think it was how happy and positive the crowd was that just made me excited to have fun with it,” she said afterward.

She talked about storytelling being a part of “human DNA” and how she feels “animation can change the world.”

“From the goofiest cartoons to the most revered films – it’s truth we’re after,” Nelson said to the crowd. She hopes to write for animated films.

For many, commencement is more than just one day. It symbolizes a journey.

When Jesse Ramirez, 31, walked on Friday, he became the first in his family to graduate from college. 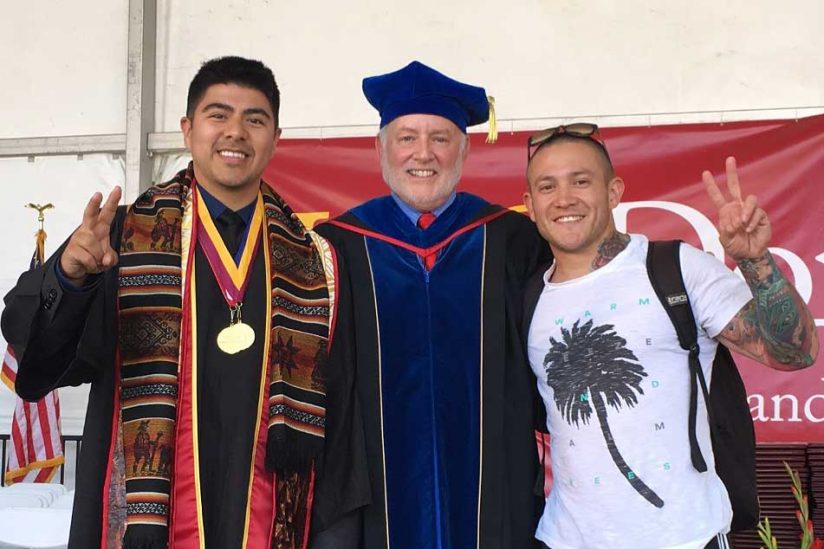 “I feel like I accomplished something that’s a very important part of my life,” Ramirez said. “It’s going to open a lot of doors not just for me, but for future generations of my family.”

It was hard because Ramirez, who transferred to USC from Santa Monica College in 2014, didn’t have his family there to see it: They’re in Mexico temporarily with family and couldn’t make it. His girlfriend, Tina Fleming, was supposed to walk, too, but couldn’t get the day off work. He wore her Pacific Islander sash in her honor.

But there was one familiar face in the audience. Jonathan Over, a fellow Army veteran he met at Fort Bragg, N.C. Ramirez had gone to Over’s commencement at USC last year and Over was there to return the favor, rooting for Ramirez — and making sure to snap pictures for those who weren’t there.

“It was great to have him here. He’s a brother for everything we’ve gone through,” Ramirez said, noting they now have the Army and USC to bond them. “We have an awesome story to tell our families for years to come.”

USC commencement 2017: The day in pictures

Enjoy the sights as more than 60,000 people gather at the University Park Campus to congratulate the Class of 2017.

Cooper Nelson: ‘USC has shaped, inspired and challenged us’

The valedictorian’s commencement address looks at her classmates with admiration, and ahead to the future with wonder.

Will Ferrell: ‘It is incredibly surreal … that I get to deliver this address to you’