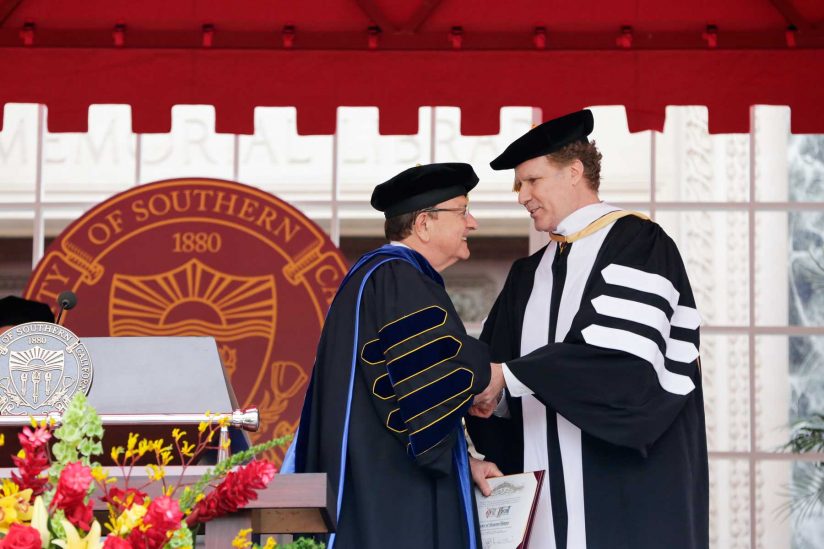 Will Ferrell ’90 has long trod the sidelines of USC football games, led the team onto the field of battle and returned for campus events on behalf of charities like Cancer for College. But none of the more than 60,000 people attending USC’s 134th commencement Friday knew quite what to expect when one of the university’s most famous alumni took to the stage.

Or necessarily who to expect, given Ferrell’s lively, anarchic and often impromptu caricatures over the years across television, film and the internet, from President George W. Bush to Chicago Cubs broadcaster Harry Caray to even USC’s own beloved Tommy Trojan.

As Ferrell delivered his remarks to chants of “Frank the Tank” from the graduates, the answer became abundantly clear: He was the inimitable Will Ferrell himself, bold and beloved comedy star, loving husband, kind father, philanthropist and proud member of the Trojan Family.

The secret to Ferrell’s success? “I was just trying to throw as many darts at the dartboard hoping that one would eventually stick,” he said.

This year’s commencement ceremony drew more than 60,000 guests to the University Park Campus. The Trojan Family sent out 17,144 new graduates into the world, with the newly minted graduates representing more than 115 countries across the globe.

Amid Ferrell’s expectedly uproarious laugh lines and the Mark Twain Prize winner’s recounting of a great American comedy journey rooted at USC, President C. L. Max Nikias reminded those graduating of their own duty to pay Trojan Family values forward across the globe, as so many already have.

“The sun never sets on the Trojan Family. This is the greatest and most dedicated family of its kind: hundreds of thousands of women and men who serve as leaders from Southern California to San Francisco, from Tokyo to Hong Kong, from New York to London to Mumbai and beyond,” Nikias said.

Ferrell, who graduated with a degree in sports information (“a program so difficult, so arduous, that they discontinued the major eight years after I left”), credited his experience at USC with nurturing his early comedy instincts.

“For you see, the seeds for this journey were planted right here on this campus. This campus was a theater, a testing lab, if you will,” Ferrell said.

Ferrell particularly cited Ronald Gottesman, a longtime USC English professor who co-edited the first two volumes of The Norton Anthology of American Literature, in encouraging his budding talent at a crucial juncture.

“My good buddy Emil … told me one day that I should crash his Thematic Options literature class. So I cobbled together a janitor’s outfit, complete with work gloves, safety goggles, a dangling, lit cigarette and a bucket full of cleaning supplies.

“And then I proceeded to walk into the class, interrupting the lecture, informing the professor that I had just been sent from physical plant to clean up a student’s vomit.”

Despite his serious subject matter, Gottesman loved the routine and asked Ferrell to come back in character several times, giving birth to Ferrell’s first recurring bit years before Craig, the earnest student cheerleader on Saturday Night Live. In one lecture, Gottesman even found a way to relate Ferrell’s antics back to Walt Whitman and Leaves of Grass.

“Moments like these encouraged me to think that maybe I was funny to whole groups of people who didn’t know me. And this wonderful professor had no idea how his encouragement of me, to come and interrupt his class no less, was enough to give myself permission to be silly and weird,” Ferrell said.

Talent, luck and the Trojan Family

Ferrell also described a journey after USC that, like the fictional Ron Burgundy’s own tale, wasn’t without its adversity. Ferrell lived back at his childhood home in Irvine the first two years after college, plugging away at stand-up comedy and improv theater. However, the Trojan Family again gave him the resolve to fight on.

“I would work the phones to invite all my ’SC friends to places like Nino’s Italian Restaurant in Long Beach, the San Juan Depot in San Juan Capistrano and The Cannery in Newport Beach. And those members of my Trojan Family would always show up.”

Among those comedy venues was Los Angeles’ famed Groundlings Theatre, where Ferrell would be discovered by Saturday Night Live producers in 1995.

My fear of failure never approached, in magnitude, my fear of ‘what if.’ ‘What if’ I never tried at all?

“My fear of failure never approached, in magnitude, my fear of ‘what if.’ ‘What if’ I never tried at all?” Ferrell added.

The rest is history, but Ferrell’s cycle of challenges would repeat itself, as critics first doubted his viability as a performer on Saturday Night Live, and then as a major film star. However, Ferrell proved them wrong every step of the way by continuing to take heartfelt chances. He encouraged the USC Class of 2017 to do the same.

“For many of you who maybe don’t have it all figured out, it’s OK. That’s the same chair that I sat in. Enjoy the process of your search without succumbing to the pressure of the result. Trust your gut, keep throwing darts at the dartboard, don’t listen to the critics and you will figure it out,” he urged them.

Ferrell capped his own campus valedictory by urging the 2017 class to “Fight On!” but not without first throwing one last dart that more than seemed to hit its mark with the honored graduates, their family, friends and other gathered guests: a completely Ferrellian rendition of I Will Always Love You (minus the cowbell).

Ferrell was one of six attendees presented with honorary doctorates from the university. The others were:

From the family that flew in from Japan to the first-generation graduate whose girlfriend had to work, there were plenty of stories to share Friday. Here are a few of them.

USC commencement 2017: The day in pictures

Enjoy the sights as more than 60,000 people gather at the University Park Campus to congratulate the Class of 2017.

✌ Class of 2017: Her USC adventure has stretched from cinema to history, with a little Voltron and Bigfoot thrown in for good measure.

Trojans, including Will Ferrell, honor Class of 2017: more than 17,000 graduates