Serhan Ulkumen was contributing to a first-time USC event on cancer, but he wasn’t feeling well.

The USC Dornsife College of Letters, Arts and Sciences junior and two teammates, known as “Infusion,” were participants in Hack for Health, a three-day “hackathon” in which nine teams aimed to produce technological solutions for dealing with cancer.

Team Infusion was working on an app that hit close to home for Ulkumen, a cancer patient undergoing chemotherapy. The app is a smart calendar designed to help others whose physical challenges are similar to those of Ulkumen.

Diagnosed with Hodgkin lymphoma in November, Ulkumen has had biweekly infusions of anti-cancer drugs since December. The medicines are powerful, and they come with debilitating side effects, including nausea, headache and fatigue.

The illness that drove the neuroscience major home in early April stemmed from an infusion he had received the previous week, and his decision to leave proved wise. The malaise quickly escalated after he arrived home, and he ended up in the emergency room later that night.

“It’s actually the worst that my side effects have been,” said Ulkumen, who recovered shortly after. 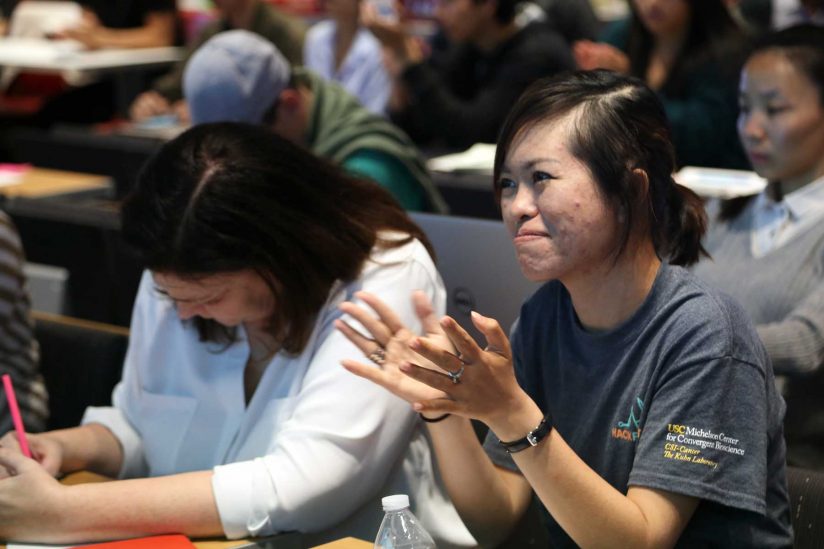 Ulkumen and his associates spoke with patients and physicians who described the challenges of living with cancer. They also heard from Kara DeFrias, a former director with the White House Cancer Moonshot, patient advocate AnneMarie Ciccarella and other notable experts who gave keynote speeches at the USC event.

What they learned jibed with Ulkumen’s experience: Side effects of treatment can interfere with important events such as birthdays, weddings, graduations — even hackathons.

“I end up having to schedule my life around the chemotherapy, and not just the infusion dates but also the effect that it’s having on my body after that,” Ulkumen said.

“Infusion is an application that allows you to stay on top of your chemo regimen by tracking your side effects and adverse events, and then figuring out how they repeat over time,” Cohn said during his presentation to the hackathon judges on the final day.

“So you can actually predict how you’re probably going to feel on any day in the future over the entire course of treatment.”

Cohn and Lam demonstrated the prototype app they had brought to fruition in less than 72 hours, displaying an impressive array of features including simple menus, a graphic display of symptoms over time and a calendar integrating that information.

They explained that patients could work with their treating physicians to plan around important events, something they had learned was a priority for patients.

“Infusion empowers patients by letting them use their data to find a balance between life and chemotherapy,” Lam said.

In the end, the team’s work earned them second place, $300 and the opportunity to continue developing the app under the guidance of Peter Kuhn, Dean’s Professor of Biological Sciences and professor of medicine, biomedical engineering, and aerospace and mechanical engineering, and Truong, who now works with Kuhn on his Convergence Science Initiative – Cancer (CSI-Cancer). 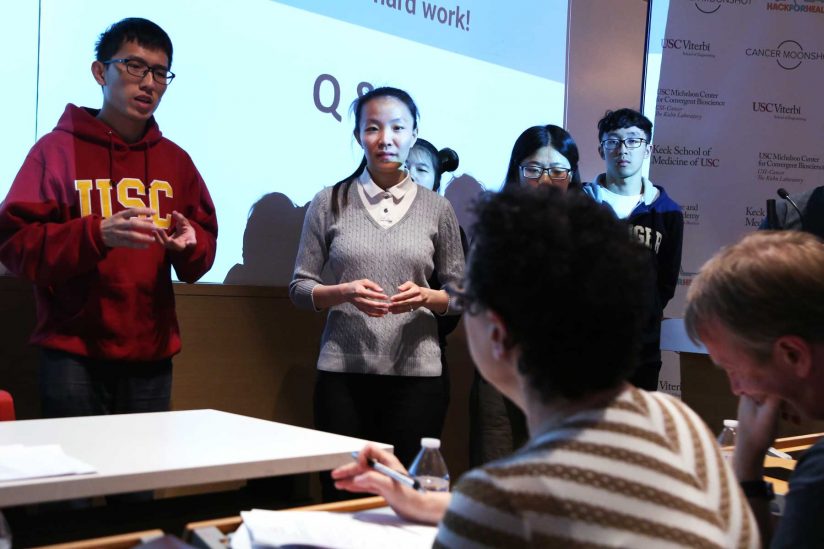 Hackathon prizes and fellowships were provided by an anonymous donation designed to bring data analytics and crowdsourced data to patient benefit, according to Kuhn, who is also associate director of the Bridge Institute at the USC Michelson Center for Convergent Bioscience.

Kuhn, along with DeFrias, Jorge Nieva of USC Norris Comprehensive Cancer Center, Dean Erica Muhl of USC Iovine and Young Academy, and Lawrence Lau of the USC Stevens Center for Innovation served as a hackathon judge.

Kuhn said he was impressed with how effectively Infusion and the other teams worked.

“They set an amazing pace of going from the ‘why’ to the ‘how’ to the ‘what’ and prepping to iterate,” he said.

Team Infusion will continue to work on its app for the next six months as Michelson CSI-Cancer Fellows, led by Truong and academically mentored by Kuhn while being guided by an ongoing engagement with patients and physicians.

For Ulkumen, who put his studies on hold while undergoing treatment but will return to USC Dornsife in the fall, the hackathon proved to be a moving experience.

“I’ve been feeling like my life has been on standby and that’s part of the reason I’ve wanted to do this hackathon,” he said. “I’ve been inspired to do something again.”

A five-minute oral cancer screening can save your life

Master of Health Administration graduate at USC Price takes steps to help thousands of patients on the city’s west side.

Cancer research in the era of team science