Standing on the sand at Venice Beach, Soraya Simi knew her best view of her subject – a stand-up paddleboarder – would be from the water.

So she grabbed her wetsuit, fins and GoPro and jumped in. 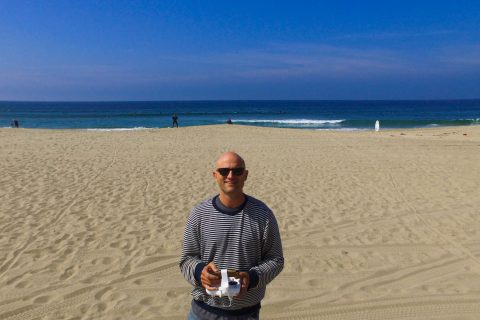 Keith Plocek takes a self-portrait with a drone. (Photo/Keith Plocek)

This is the life of a surf journalist.

Simi, a sophomore at USC, is in Keith Plocek’s class, “Shoot the Curl: Digital Storytelling and Surf Journalism,” the first surf journalism class to be offered at the USC Annenberg School for Communication and Journalism.

Plocek, a surf journalist and the former head of digital for Village Voice Media, is giving undergrads the chance to, ahem, get their feet wet in the world of surf journalism.

Although Simi, a film production major, loves to surf, many in the class don’t know anything about the world that has defined much of California.

The class is intended to teach surf journalism like community reporting. It’s much more than surfers: It’s the restaurants, the real estate developers, the music.

“I think it’s valuable because it teaches them to understand the community they cover and move beyond cliché,” Plocek said.

Students in the class cover L.A.’s surf community in a myriad of ways, from writing profiles to shooting photo essays. Plocek’s class also encourages the students to think outside the box when it comes to tools, encouraging them to get in the water with a GoPro to get the raw footage action sports journalism is known for.

The biomedical engineering major and cinematic arts minor juxtaposed El Porto’s canine culture with the fickle wave conditions. He also did profiles of pro surfers and the 9-5 jobs that help support their habit. 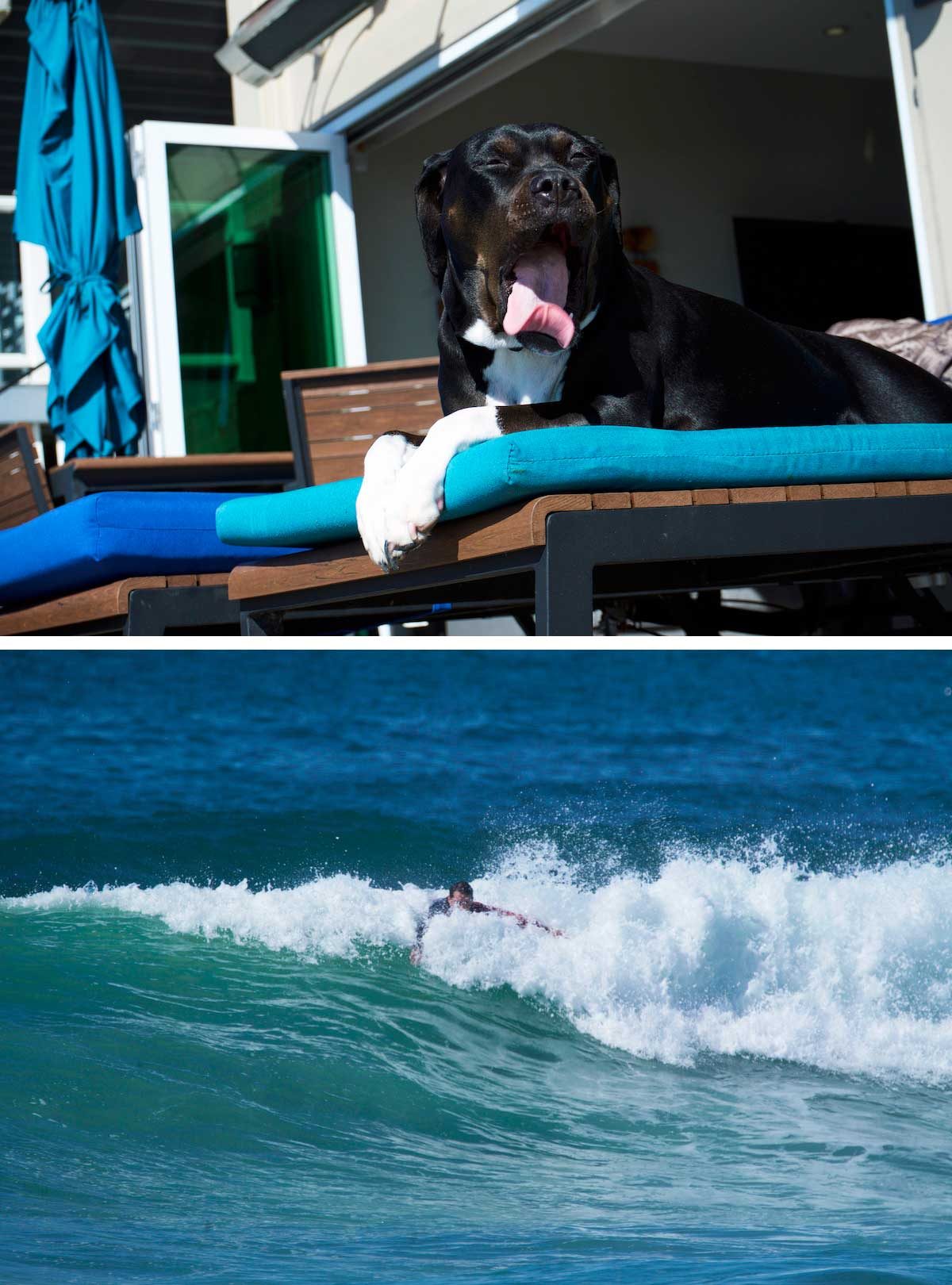 Surf diptych juxtoposing the high tide conditions and the mood of the local canine. (Photo/Matteen Maroofian)

Plocek centered much of the class – which is open to non-journalism majors – on the community of El Porto in Manhattan Beach. Students go into town throughout the semester, finding subjects to write about, produce short documentaries on or photograph.

Focusing on a specific place was similar to a beat, allowing the students to learn the nuances of the place instead of making assumptions.

“There’s a tendency to parachute in, file a story – your piece is kind of written before you get there sometimes,” he said. “I want them to get to know them as people and relate to them.”

Rachel Ramos, working toward an MS in journalism, said covering El Porto is good practice if she decides to get into broadcast news, where she’d likely start out covering communities in small markets.

A core component of Plocek’s class, which is a new offering this spring, is guest speakers. One was 31-year-old surf journalist Zach Weisberg MBA ’13.

Weisberg, a former editor for Surfer magazine, now runs a surf and outdoors website called The Inertia, based in Venice. He answered questions from students about everything from advertising to what makes a good story.

When it comes down to it, it’s about telling a story anyone can relate to – surfer or not, he said.

“We approach stories from a very human perspective,” he said of The Inertia. “We care about action and getting barrels and the waves getting big – but I think it’s really about relating to people at a personal level and that comes down to storytelling.”

Weisberg applauded Plocek’s multimedia focus. Beyond writing, students are tasked to shoot photo essays and create videos with GoPros. They even got a day at the beach to work with a drone.

“Even if surfing isn’t your thing, this class is teaching me so much about photo and video in general,” said Katcy Stephan, pursuing a master’s in journalism.

On one weekday, Simi woke up at 5 a.m. at her place off campus and dropped $20 on a Lyft to make it the beach to meet her subject, Sean Poynter. Poynter is a professional stand-up paddleboarder. She went there to get a glimpse of him using a difficult and rare piece of equipment, a board that seems to levitate above the water. It’s called a hydrofoil and can cost upwards of $3,000.

“These are things I would probably do in my free time anyways,” she said.

The class is just capitalizing on her passions – surf and filmmaking – and she couldn’t be more stoked.

The former co-anchor of ABC News’ Good Morning America/Sunday and senior editor of Huffington Post has served as director of the journalism school, where she launched its state-of-the-art Media Center.

USC Annenberg and USC Viterbi join to report on accident-prone roadways and the worst interchanges.

Who’s to blame for fake news and what can be done about it?

USC experts weigh in on the internet-driven phenomenon that has quickly changed the way we look at just about everything.

Investigative journalism at USC gets boost from Ring Foundation pledge

Trojans get feet wet in world of surf journalism