Kate Livingston is inside another woman’s computer — looking at every file, every instant message, every document.

She’s looking for damning evidence that could show that this woman, under investigation by her company, meets grounds for termination.

“If I were in her shoes …,” Livingston thought to herself. 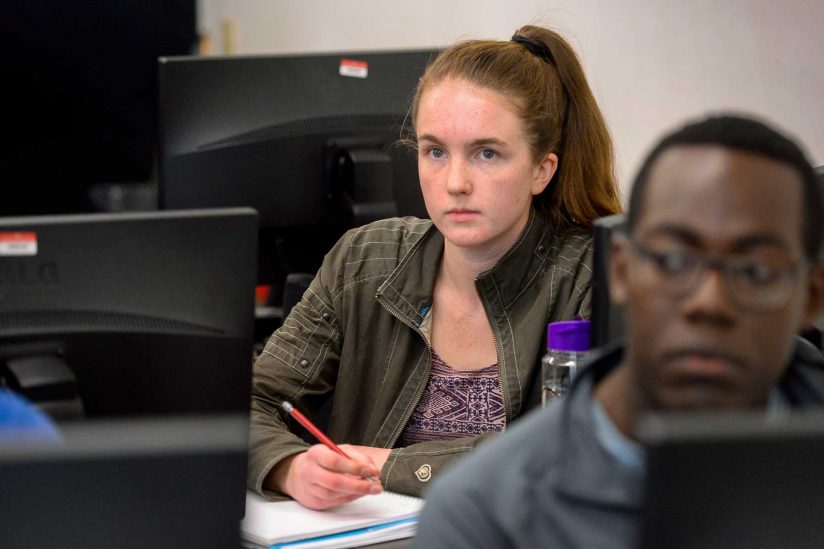 Then she found it: a string of emails.

The employee was talking inappropriately with a competitor and passing on sensitive company information that included her clients’ credit card information.

This time, Livingston’s find was for a class assignment. But she could find herself doing the real thing in a few years.

Livingston, a sophomore, is part of a growing cohort of women pursuing the digital forensics minor at USC. Digital forensics involves investigating a data breach, analyzing a complex computer system to identify security issues and recommending ways to better safeguard it.

It’s one of two minors offered in cybersecurity within the USC Viterbi School of Engineering’s Information Technology Program. The other minor is applied computer security.

Joe Greenfield, the USC Viterbi associate professor who created both minors, says women often make up nearly half of the students in his digital forensics courses – uncommon compared to still male-dominated STEM (science, technology, engineering and math) courses in many other departments.

“We’re talking about a discipline that’s been around since the early ’90s,” Greenfield said of cybersecurity. “Since it’s so new, some of the established prejudices aren’t there, and that’s why I encourage students to get in.”

The top programs, according to the 2014 Ponemon Institute ranking of 183 programs, sponsored by HP Enterprise Security:

The interest is also evident outside the classroom. Undergraduates Belen Bustamante and Jennifer Kassar founded the Digital Forensics Organization, a club that hosts cybersecurity events, about five years ago. Women now outnumber men on its executive board.

“I just fell in love with the problem solving aspect of it and the challenge,” said Livingston, 19, the club’s vice president of public relations.

Since it’s open to all majors, Greenfield finds that cybersecurity lures plenty of non-STEM majors and along with that, it lures more diversity.

“Forensics is all about, not just problem-solving, but explaining what has occurred and what actions to take … Having that big picture appeals to the non-stereotypical engineer,” he said.

It’s also a hot time to be in the specialty.

Both the public and private sectors are responding to the ubiquity of cybercrime — such as data breaches — with thousands of jobs in security, Greenfield said.

When Greenfield joined USC full-time in 2008, the university offered three elective courses in the subject. He’s now roughly quadrupled those offerings — to two minors and 11 courses, including the popular “From Hackers to CEOs: An introduction to information security.”

Although USC’s program is growing, it’s hard to stay at the same clip as the rapidly growing industry.

“It went from a couple of students in the program getting hired to the majority of students getting multiple interviews and getting at least one offer,” Greenfield. “That’s the biggest complaint I get from these companies — that we’re not graduating enough of them.”

Three years ago, EY (the former Ernst & Young) hired an entire class. PricewaterhouseCoopers regularly recruits from USC, calling it one of its top five schools.

Their multidisciplinary interests can serve as an asset, Hynes said. Having a degree in, say, psychology or political science, can help navigate relationships with executives from companies across the world.

Tamar Fleshler, a junior, says cybersecurity gives her another lens to use to look at global issues.

“It’s an awesome combination of understanding the world from a larger perspective and being able to problem-solve on a smaller perspective,” Fleshler said, an environmental studies major who is minoring in applied computer security.

Both EY and PWC are represented on an advisory board for the program, which enables faculty to get industry feedback. Greenfield has always wanted the program to be grounded in reality, graduating students to go straight into consulting roles.

The faculty members are still practitioners, bringing their own case files into the classrooms.

“We’re not giving examples of what we were doing 10 years ago,” Greenfield said. “No, this is what we did last weekend.”

The downtown L.A. facility will provide students with firsthand experience in advanced technologies.