By 11 a.m., she’d already handed out five résumés – crossing her fingers for a summer internship.

Ludiarto would be one of roughly 3,000 USC students who would check out the USC Career Center’s Spring Career Fair, which is open to all students in all majors.

Students had the opportunity to talk to recruiters from roughly 200 organizations — from Fortune 500 companies to startups— in person rather than through impersonal email or online forms.

“I have a healthy distrust of online apps. I think face-to-face is what gets you in the door,” said David Hong, a senior majoring in business who is hoping to go into social media or tech.

“The connections are amazing,” he said of the opportunities at USC. 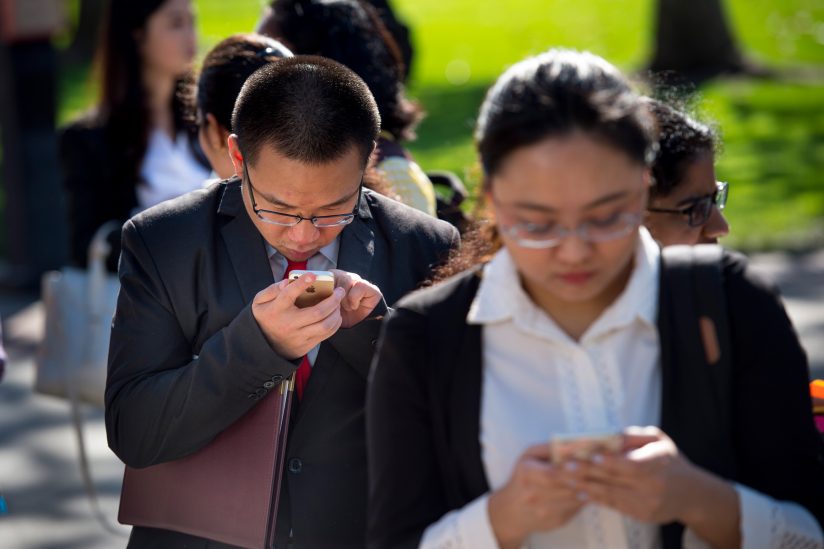 Investigate Industries and Internships (i3)

Beyond the PhD and Postdoctoral Career Conference

Job prospects may be looking up for students if last year’s numbers continue trending. Nationwide, employers were expected to hire about 5 percent more graduates from the class of 2016 compared to their counterparts from 2015, according to the National Association of Colleges and Employers. And recent college graduates in 2016 had an unemployment rate of 5.6 percent, according to the Economic Policy Institute. That’s the lowest rate since June 2008.

While attending the fair may be a no-brainer for upperclassmen pondering their next move, younger students can still benefit from attending the fair, according to Erin Jebavy, marketing and events coordinator at the Career Center.

Freshman Kartik Mathur said he has visited every career fair offered this academic year. He’s trying to get a feel for how recruiting works.

“It’s never too soon to start creating relationships with these employers,” Jebavy said. “They come year after year. … Maybe you hit it off with the recruiter from Toyota and, next year, when you have more experience, you can come back, apply and that recruiter will know you.”

If students missed the fair, the Career Center has other offerings, such as on-campus recruiting, where students can apply and interview for jobs on campus. During winter breaks, students can interview in-person at positions in cities like Boston, New York of Washington, D.C. There’s also space at the center for Skype interviews or a web cam to do a practice interview.

“We want our students to have ample job opportunities — that they’re employed when they graduate and they’re finding the areas and industries they’re interested in,” said  Carl Martellino, executive director of the center. “It’s part of the overall caring for the students — while they’re here at USC and beyond.”

Next week, the center is hosting a weeklong internship fair called i3. Each day will focus on a different industry.

You may have seen the USC School of Cinematic Arts student’s work on HBO. Or on album covers. Or in an Icelandic wedding album.

The USC Annenberg junior and pre-med student keeps busy using both sides of his brain.

Urban planning is a field that affects everyone — whether young people realize it or not.

Thousands of students turn out for USC’s Spring Career Fair